Restoring Fertility through the Ridge-to-Valley Approach 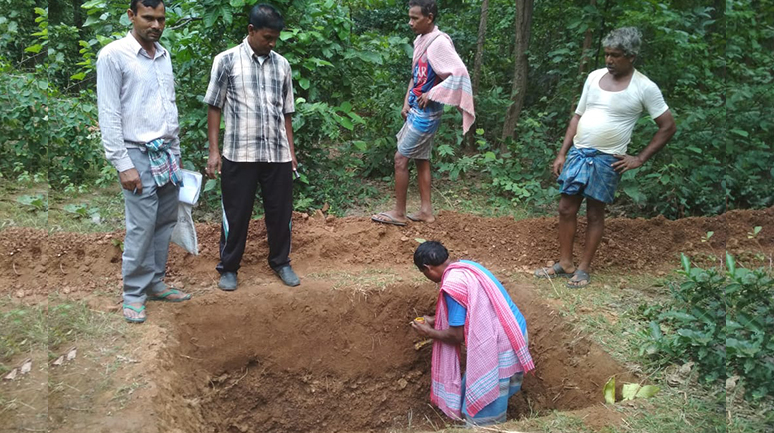 Working on finding scientific ways to increase the availability of water in villages through most of the year led to collaboration between various stakeholders, including the community, the forest department, the MGNREGA cell and PRADAN. The secret lay in inclusion, building trust and collaboration while working for a common goal.

Societal changes don’t take place overnight or even in a fortnight because the roots of the problems go deep into generations of struggle. Having said that, perseverance, courage and hard work go a long way in bringing sustainable changes.

When we talk about sustainability, we must enlist a community’s collaboration before designing the framework, in order to ensure the long-term success of any initiative. Collaboration among various stakeholders of the community leads to development; this was, once again, proven by introducing a watershed project under Ushar Mukti in Agajhore village, Barabazar block, Purulia district. The land in the Agajhore village is fallow because most of the water flows away as runoff due to the lack of an effective rainwater harvesting system. As a result, Agajhore village, like other villages, faces a water crisis and a drought once in two years.

“We will not let any more water go out of our mouza (village),” said Bankuan Ansari, a resident of the village. The government of West Bengal is partnering with the Bharat Rural Livelihoods Foundation (BRLF) and PRADAN (a leading civil society organization) in the implementation of the Ushar Mukti project in this region, a project supporting people such as

From orienting the community regarding the project, mapping the resource and land-use at the village level to comprehensive planning, keeping in sight the landholding patterns of households, every step was taken to draw the community into the process.

Bankuan Ansari to meet their vision of self-sufficiency.

The project proposes to follow the watershed management approach in the implementation of MGNREGA to undertake a comprehensive treatment of a given area, leading to enhanced impact of land and water-based interventions. This aims at treating large areas of about 1.2 million ha in the catchments and to rejuvenate the seven major decaying rivers and their tributaries through focused interventions in water conservation and harvesting. The interventions also aim at improving the productivity of the land by soil and water conservation measures, impacting and improving the overall hydrology of the area and, thereby, unleashing huge opportunities for farm sector-based livelihoods.

Taking one step at a time, we followed a thorough and comprehensive way to deal with the reservations of the villagers about planning a collaboration with the administration and designing various roles. From orienting the community regarding the project, mapping the resource and land-use at the village level to comprehensive planning, keeping in sight the landholding patterns of households, every step was taken to draw the community into the process. A brief handholding period is vital for any community to sustain the project as well as to experience a sense of ownership. Discussions were held in the village on the need for a ridge-to-valley approach for watershed treatment and the different structures that need to be developed for a drainage system and for water storage.

Agajhore is surrounded by forests on the uphill. Fifty-five per cent of the total land in Agajhore village falls in the uplands and 45 per cent of these uplands are under the forest department. Although the families of Agajhore mainly depend on agriculture for their livelihood, they are also directly and indirectly dependent on the forest. Women collect non-timber forest produce (NTFP) such as the sal leaf, kendu leaf and mahua from the forest to supplement their income. On an average, a family earns Rs 15–16,000 a year from NTFP. In order to protect this forest, there is a Forest Protection Committee (FPC), comprising one representative from each family.

To initiate a dialogue with the community, a village-level meeting was held and the statistics calculated and explained to the villagers, to encourage trust in and understanding of the project that was going to be different from their agricultural practices. The villagers shared their concerns regarding irrigation water and the problem of siltation, leading to the breaking of the field bund, which otherwise would remain fallow during the monsoon. 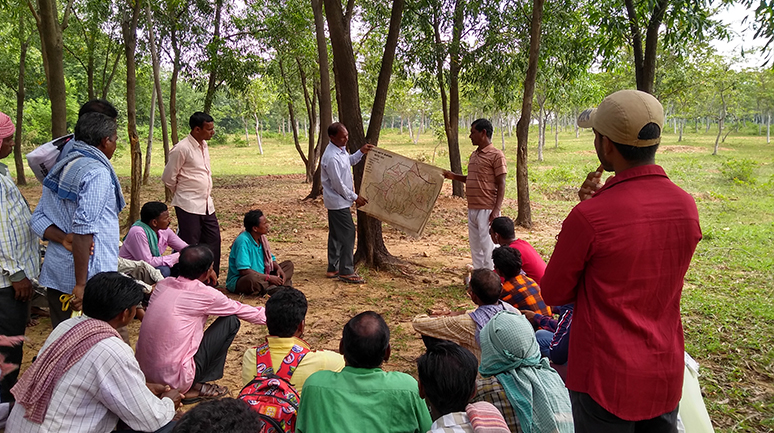 We suggested to the villagers that a series of structures need to be created from the ridge to the valley, to slow down the flow of water and also to harvest the water. This meant the forest land situated uphill had to be treated as well. Treating the lowland without treating the upland would be of no use. The villagers were very sceptical. Their experience over the past years was that the forest department dealt strongly with any issue regarding the cutting of trees. Some of them had even paid fines at the police station. “Ora dome jhamela kare, valo kore katha na bole kon kaj habek nai (They are very troublesome and we will not work without discussing this thoroughly),” said Bankuan Ansari.

Some of the people said that the planning should be done omitting the forest land. Some added that they had previously constructed farm ponds under Swarn Jayanti Gram Swarojgar Yojana (SGSY) and these ponds are now silted because the rainwater carries loose stones and mud from the forest. Certainly, the villagers were not confident about the watershed approach because of their past experiences. As a result of the runoff and the erosion of the top-most layer of fertile soil, gully formation and siltation were common phenomena in the area. The medium upland, which is otherwise fertile, also gets affected due to siltation and breaking of

A ridge-to-valley treatment was the best solution for this area. To convince the community, we did some calculations with them. We calculated how much water flows from that upland every year and what the villagers could gain if they could retain that water. Considering the average rainfall of 1200 mm, the total volume of water that can be harvested would be 193.79 crore litres. If we looked at the rainy season alone when we get 60 per cent rain of the whole year, we could still collect 46.51 crore litres of water even after factoring in a 40 per cent loss. We calculated and presented the statistics that approximately 451.55 ha kharif paddy and 150.55 ha of rabi vegetables would get life-saving irrigation.

After explaining the data and the proposed project, we sensed optimism and hope. Comments such as “Our rice will never die”, “We will have many vegetables in our village”, and “No one has to go out to work anymore” could be heard more often.

The watershed approach requires ridge-to-valley treatment and, hence, working on forest land became imperative. The maximum forest area was in the upland area, indicating that the ridgeline goes through the forest land. The larger chunk of the upland belongs to the forest department, which has very stringent rules; therefore, to treat the upland, it was very necessary to build a relationship and mobilize the forest department. We were new to such an initiative and collaboration and we lacked the experience of working with the forest department in Barabazar block. The forest department was already engaged in the treatment of its lands; convincing it, therefore, of how our ridge-to-valley approach would be beneficial to the community was a difficult task. We met the official in charge and the Forest Ranger and spoke of the issues the villagers were facing by the forest area remaining untreated. We told them why a ridge-to-valley approach was required. We explained the treatment plan through presentations, handouts and examples of the Bandudi watershed, a model watershed in Barabazar block. After much deliberation, the officials were open to following the approach. However, they also voiced their fears of the villagers entering the forest area.

The next challenge was role clarity because the block administration and the gram panchayat were also involved. We had detailed discussions on the roles and responsibilities at different nodes and assured them about the roles and responsibility of PRADAN. I assured them that the community would be mobilized so that work can be implemented at the grass-roots level smoothly, along with coordinating with all the stakeholders for technical help required in construction the 30 x 40 model.

After the above interventions, we held an interface meeting between the forest department and the local community. Whereas the department had concerns about the cutting of trees, the community had apprehensions about the upland treatment and work permissions. Arranging a meeting to discuss these issues helped open a channel of communication between the parties, in which they put forward their reservations. These issues were then resolved with the help of our intervention and we gave our word to monitor and evaluate the terms as well.

“Jai kaj khuluk age amra boner kaj tai korbo (No matter what we do, we will do the work of the forest first),” said Abbas Ansari, a resident of Agajhore village.

The trust mirrored in these words was not easy to gain; the mutual scepticism shared by the villagers and the forest department was sorted out by setting up a meeting with the district administration, with inputs from the MNREGA cell. The focus of this meet was to initiate dialogue and get the stakeholders on board to re-assess the approach for reaching the goals we set to achieve with the Ushar Mukti project. The forest department agreed to work on the 30 x 40 models that we had proposed after a detailed analysis of different land treatment, based on land category. We discussed our plan for 31 schemes on the forest land and, at present (October 2020), 15 of the 31 are ongoing, with a budget of Rs 141 lakhs for Baghmundi block through MGNREGA; 75 ha will be impacted.

The energy and enthusiasm that emerged with this process serves as a model for collaboration for other villages. The roles and responsibilities of PRADAN, the gram panchayat, and the forest department were defined. The interventions were assimilated smoothly because of the consistent efforts to bring the stakeholders to a common ground. Although, earlier, the villagers were very apprehensive about working with the forest department, the community gained confidence as time passed. 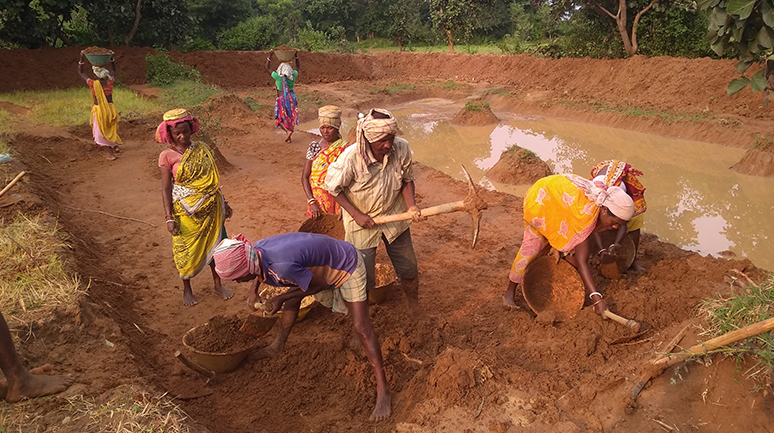 The community was now confident that it would get much more water for the rabi season from a pond situated just below the upland because of seepage from upland. Gholtu Sing Sardar said, “Ei bachor dhan laganor chinta ta komlo ektu hole ar motamuti bon dharer 400 decimal jamite valoi dhan hobe (This year, we are less worried about the paddy production and even in my 400 decimals of land, I am confident of a good harvest).” The villagers reminisced that water was usually available seven months in a year for as long as they could remember; this year, the farm ponds will bring fertility, joy, and water for 10 months of the year!

The belief that a greater goal can be achieved by including and using local resources and making plans with the community’s perspective in focus has made this model a success. How else would you describe the 26.09 lakh litres of water that will collect in the farm ponds this year?

Kanad Ghosh is an Executive in PRADAN, based in Baghmundi in the Jangal Mahal area in West Bengal. He joined PRADAN in 2009 as a Development Apprentice after completing his Post Graduation in Electronics from Vidyasagar University. He is actively engaged in the promotion of women’s collectives and has expertise in Rural Livelihoods Promotion and Natural Resource Management. He is currently implementing the Ushar Mukti and West Bengal Accelerated Development of Minor Irrigation Project (WBADMIP) in Purulia district.