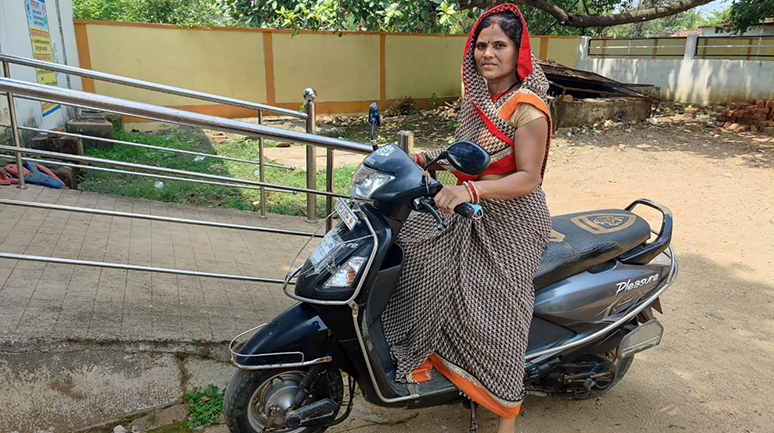 A resolute determination and a supportive community go a long way in helping bring about transformation from despair to hope in Kavita Yadav’s life; she changes her destiny to become a role model for her villagers 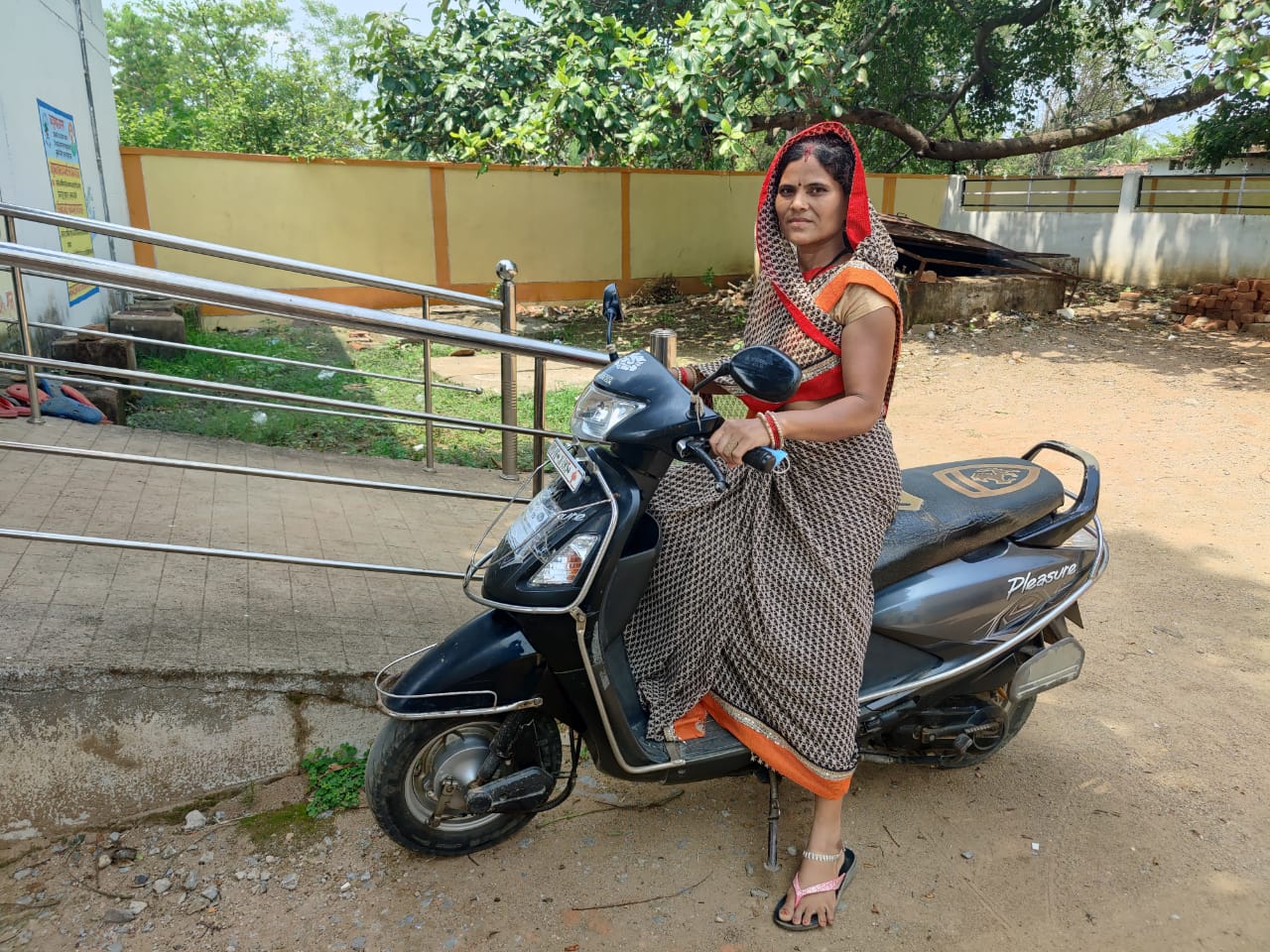 “Ye meri kahani hai aur samuh se judna mere liye ek vardaan hai. (This is my story and becoming an SHG member has been a blessing for me). I knew very early on that education was the best tool to give wings to my dreams and help me achieve my goals,” said Kavita Yadav. Once a homemaker, this is the story of Kavita’s indomitable spirit to fulfil her aspirations. Born and brought up in a poor family in the backward district of Kanker, Chhattisgarh, with four brothers and sisters, Kavita aimed for the sky and achieved it.

Financially poor, her parents struggled to raise their five children. Due to the lack of adequate resources, her elder brothers and sisters did not go to school. Kavita had to work in other houses to earn money to complete her tenth standard.

Although starkly different from what she had planned and bowing to family pressure, Kavita had to get married at the very young age of 17. It was against the law. She had to move to her in-laws family in Belargaon village in Nagri block in the adjoining Dhamtari district. She was not accustomed to the village life. She was completely unaware about how to manage a household. Within a year, she gave birth to a child.

“I was barely 18 and could not understand what was happening to me. It was difficult to adjust to the new family. With the added responsibility of the child, I found myself tied up in the situation,” shared Kavita. She gradually managed to learn the household chores and deal with her responsibilities. Kavita recalls this phase as a crucial turning point in her life that led her to mature far earlier than her years.

Despite grueling circumstances, the hope in her eyes of a better tomorrow did not fade out. The family she was married into was large and resource-deprived. Hence, even marriage was not a respite from her financial hardship. Due to a family dispute, Kavita and her husband had to move out of the joint family. She recalls it as one of the toughest phases of her life because they did not own any land or have other means of income to survive. The situation left her completely distressed.

To support her family, Kavita started working as a labourer in other people’s fields. “We would leave my children alone in the home and would go for the labour work,” she said. With no prior experience of working on agricultural land, labouring in the fields was very difficult for her. However, innumerable misfortunes and hardships did not dwindle Kavita’s confidence. She constantly kept striving to move ahead with her head held high. After all, it was for dignity in her life that she was fighting; she had full faith that, one day. her hard work would pay off.

“Ek baat to tay thi ki jo siksha se main vanchit rahi, usse apne bachhon ko vanchit rehne nahin dungi, chahe uske liye mujhe kuch bhi karna pade. Aur aisi ghutan bhari zindagi to main nahin jiyungi. (One thing is very clear. I am not going to let my children be deprived of education like I was. I will do everything in my power to see this happen. I do not want them to live a life of suffocation),” said a determined Kavita. “Not only this…I am not going to allow myself to continue living in any further misery,” she further added.

“Ek baat to tay thi ki jo siksha se main vanchit rahi, usse apne bachhon ko vanchit rehne nahin dungi, chahe uske liye mujhe kuch bhi karna pade. Aur aisi ghutan bhari zindagi to main nahin jiyungi. (One thing is very clear. I am not going to let my children be deprived of education like I was. I will do everything in my power to see this happen. I do not want them to live a life of suffocation),”

In 2018, a scheme called BIHAN was launched in Chhattisgarh by the National Rural Livelihood Mission (NRLM). The news captured the interest of every woman in the village. An enthusiastic Kavita joined a village SHG as a member. This was a completely new experience for her and it was only after joining it that she understood the enormous benefits and opportunities that came with it.

Earlier, Kavita was unable to save any money from her limited earnings; now, she could easily save Rs 20 every week and around Rs 100 every month. This was a huge transformation in her life. She achieved this only because of her SHG membership and the support of her fellow members.

Under the BIHAN scheme, Kavita got the opportunity to work as a trainer for PRADAN. Attending several trainings, as part of her SHG membership, on critical issues such as gender sensitivity, she went on to conduct workshops for other women in the village and to promote the work model and the usefulness of joining SHGs among them. This led to a remarkable increase in her confidence and her capabilities.

Kavita applied what she learned from her trainings to her own life. She quashed all types of discriminatory rules between boys and girls in her own house. This included busting societal norms and taboos about menstruation, a common prevalence in Indian families.

The workshops Kavita attended helped build her perspective on why gender-based discrimination is normalized in society and how it has been oppressing women. "In fact, sometimes, it is the women, who are their own oppressors, having been accustomed to the societal norms since birth,” said Kavita.

On the work front, Kavita works for widows, especially those who are often shunned as outcasts. “As per the prevailing norms, widows are strictly prohibited from participating in important events, especially in festivals and rituals. This is a grave injustice, in terms of their basic human rights, as individuals,” she believes.

Her next goal is to make amends and ameliorate the miserable state of widows in society and help them attain the dignity and acceptance they deserve. “I believe how any woman chooses to dress and live her life should solely be her own decision,” said a firm Kavita.

Journey forward as an SHG Member

For Kavita, what a woman should wear or how she lives can never be decided by others. It has to be the woman herself, who chooses to lead her life and the way she wants to live. Brimming with enthusiasm and energy, in the light of her own achievements, there has been no turning back for Kavita. She says, “What I have attained is way beyond my expectations; I am now able to perceive society and situations from a completely novel perspective.” She recalls joining the SHG membership primarily to gain some financial support to her family and manage some savings from her meagre earnings.

Nothing seems impossible for her anymore as she talked about turning even her far-fetched dreams of owning a house and a vehicle into reality. Besides sending her kids to a good school, Kavita is also able to fulfil some of their other demands now. The best part for her these days, are the times when she receives acknowledgement with respect in any event conducted in the village.

Owing to Kavita's exceptional accomplishments in Belar village, a face that was hardly visible earlier, she has now establisheded her own identity and is well recognized by others. Her esteem in her family has also increased, with her opinions always being considered when taking any decisions. 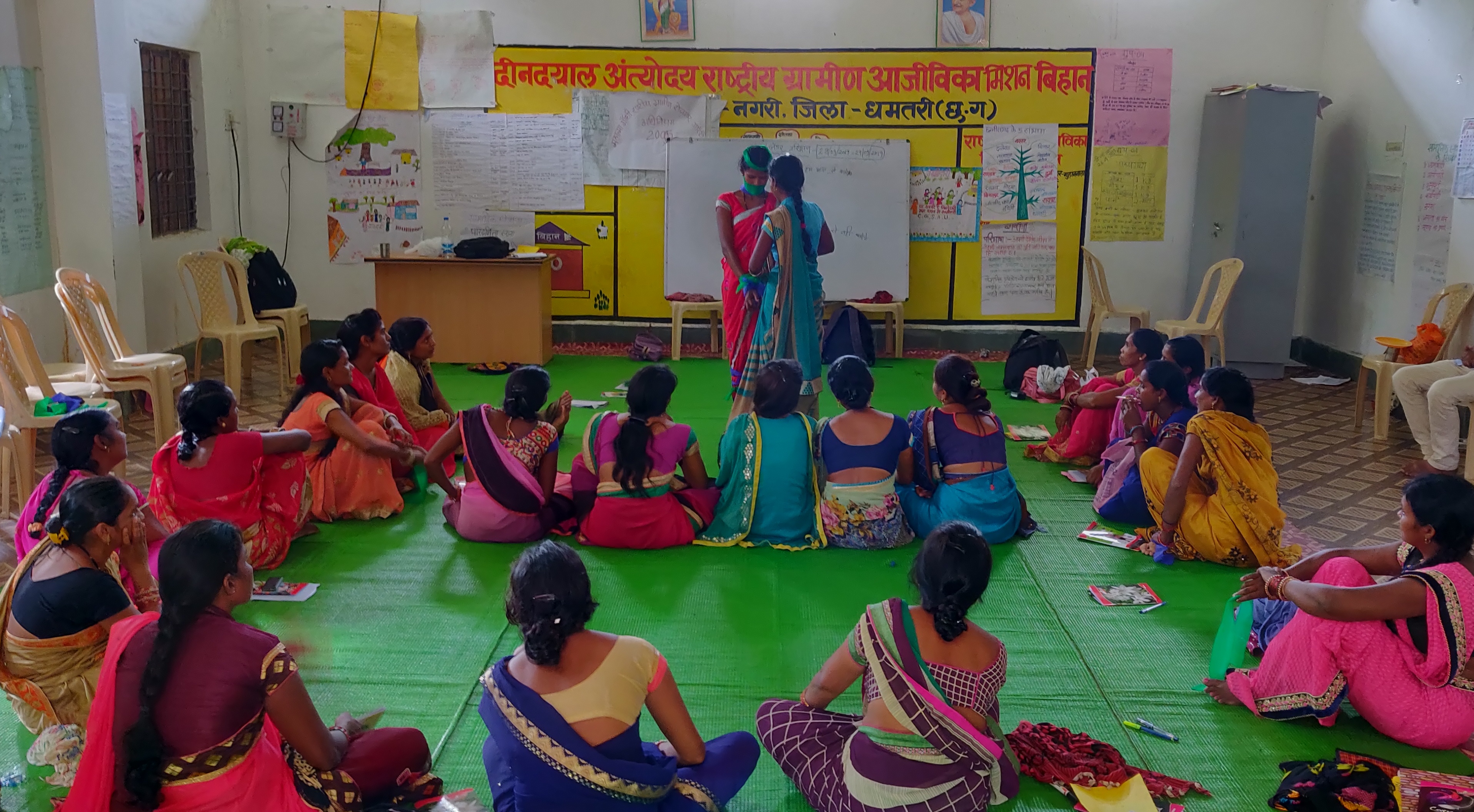 “This positive shift in attitude should not be restricted merely to me but is something every woman deserves,” said Kavita

An elated Kavita shares, “I am extremely grateful to PRADAN for providing me a platform to explore my potential and discover my sense of worth.” She wishes to continue walking undeterred on her chosen journey of not only self but also collective empowerment.

To conclude, “Happiness can be found even in the darkest of the times, if only one remembers to turn on the light,” a quote by Dumbledore in Harry Potter and the Prisoner of Azkaban seems a befitting summing-up of Kavita Yadav’s journey.