“Who is the Boss of the Film?” An Exercise in Authorship 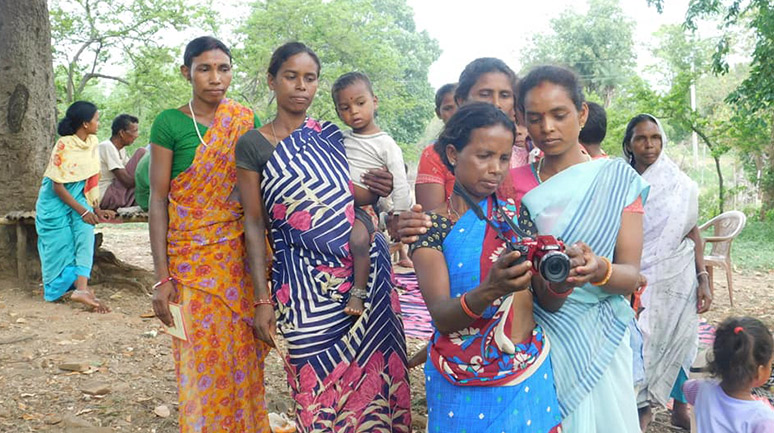 Creating films that have relevance and meaning for the local audience is essential to stimulate change in thinking and action. Choosing topics such as the traditional foods and recipes, and highlighting their nutritional value not only serves to revive dying practices but also inculcates pride in traditional practices and tribal customs

Film-maker Christine Cornea and Research Associate Alexandra Smith travelled to India in March 2020, to create a series of short films about food and nutrition for the CHIRAG research project; in the process, they trained local youth volunteers to make films. These films were to be used to support the development of a virtual knowledge centre, which was to be managed by the communities. The knowledge about food diversity and sustainable practices was to be shared and exchanged.

What is the CHIRAG project?

The CHIRAG project (Creative Hub for Innovation and Reciprocal Research and Action for Gender Equality) is funded by the UK Global Challenges Research Fund (GCRF), through the University of East Anglia’s (UEA’s) Global Research Translation Award (GRTA). The Indian research partners, PRADAN and Kalinga Institute of Social Sciences (KISS), are working with communities in Chakai and Koraput, and Kandhamal to study their nutrition, health and well-being, and generate practical knowledge. This knowledge is to be shared via an innovative digital hub, called CHIRAGVaani, through video podcasts, articles, interviews, films and other tools.

W hen the CHIRAG project trained tribal youth to use digital video cameras in 2020, it did it with the purpose of documenting traditional food practices.

However, a year down the line, there has been a welcome spin-off not fully anticipated. The digital camera in the hands of the youth has not only inculcated a sense of agency, an authorship, a romance with the power of technology but also generated, by default, an interest and stake in their traditional knowledge systems; it has stimulated the potential of making traditional foods an aspirational goal again.

Women in Barmasia village of Chakai experimenting with the digital camera.
(Picture by Simon Baskey, a local youth volunteer in Chakai)

The politics of representational technology and the power of image-making has a huge potential. The project deployed younger people to document the knowledge and skills of their elders; this could validate and legitimize traditional knowledge and its knowledge keepers in a way that paper documentation has and does not. However, before they did that, they needed to address one matter.

They had to tell the story of the traditional recipes made of produce foraged from the forests; a skill that had been passed down generations and was now in danger of being lost. Although they had uploaded their films on YouTube, something seemed amiss. The films did not have the stamp of their authorship. Additionally, they had to learn how to tell the story, and to do that, they needed to decide who their audience was. To explore this and support the youth, I, in my capacity as a film-maker, joined the PRADAN and KISS teams in several sessions of mutual learning and exciting discussions, spread over three months, in early 2021.

The task was, in the words of the CHIRAG team, to “identify the boss of the film,” the primary audience, the people who would watch the film.

There was no other way to learn except to create, test, pilot, test, evolve, question presumptions and learn from peers. Furthermore, it involved identifying local film critics and understanding what they thought of the films made by the local youth.

Some other guiding questions for the team were: How can we get honest feedback? How can we ensure that the trial audiences do not second guess and only tell us what they think we would like to hear? Are we/they trying to fit into what is the conventional notion of films?

There was no shortcut. It meant editing various versions of the product, testing and coming back for discussions with the feedback.

Two of the salient points of the discussion were:

The next question was what to do when the given reality does not fall into neat demarcations, to support our intentions; when some things conflict with our objectives and principles? We needed to take some decisions at the time of the shooting and others at the time of editing, regarding such apparent conflicts.

The teams were asked to watch The Women Betrayed , a film about how two tribal groups dealt with the question of witch-hunting and to observe how some of these difficult questions were answered in the film.

Traditional practices around food often involved strictures on the inclusion, or participation, of women and girls. We were faced with such a situation during Sohrai, an especially important annual harvest festival of the Santhals.

The CHIRAG team was heavily invested in the festival and decided to make its pilot film about it. After many unsuccessful attempts in finding an editor, the PRADAN team decided to learn editing themselves. Atul, the project anchor based in Chakai, edited the first draft of the film on the traditional food prepared during Sohrai. It was then that we discovered that women and girls cooked the food but were not permitted to eat it. This was in direct conflict with our objective of ensuring gender sensitive and reciprocal knowledge production and exchange. We decided to shelve this film because it would send a wrong message and/or make the issue confrontational.

However, the film was edited quite well by Atul and, therefore, served as a useful exercise and fulfilled the purpose of giving the PRADAN team confidence about their proficiency in editing.

Banwar peetha, or a recipe made of banwar (field rats) mixed with wheat flour was then selected as the next subject for creating a pilot film, which would also act as a template for future films, for the PRADAN team. Here too, a similar gender differentiation surfaced. Only men/boys were permitted to hunt for and eat banwar. We decided to tackle this issue differently. We put it as a question at the end of the film: Why not encourage girls and women too to partake in the consumption of this protein-rich food? 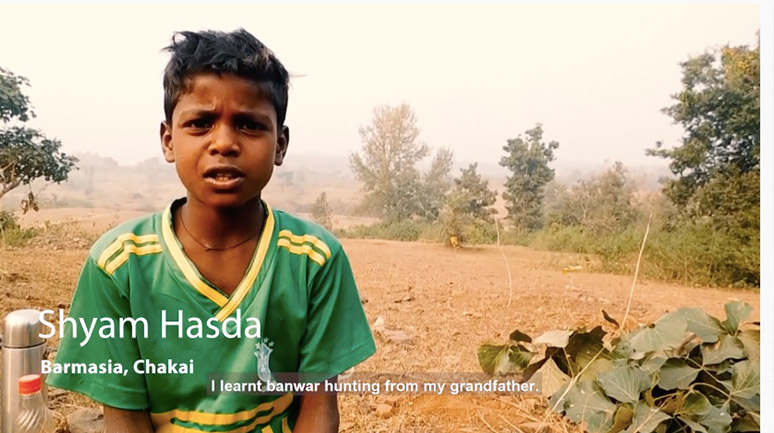 A still from the film, Banwar Peetha, used as a template for future films in Chakai

The KISS team, however, arrived at the decision to make a film on red ants because there was great footage available, and it had intrinsic value with the men cooking and women and girls also consuming it. 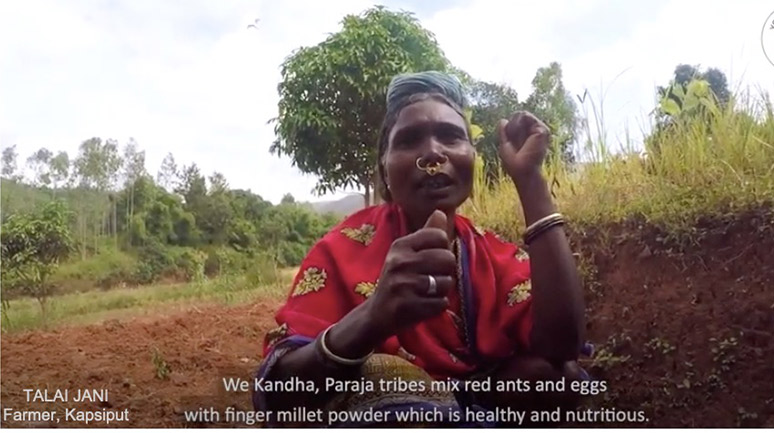 A still from the film, Aai-Kai (Red Ant), used as a template for future films in Koraput

Between voice-overs and written text

We agreed that the first cut of the film would primarily be for the tribal audience. We, therefore, decided that all the important information, including the names of the people speaking, would be voiced rather than shown as text. The written text on the screen would be an option. This was to be able to reach a larger audience, many of who were unlettered.

A quick edit became the starting point for understanding the voice-over and its politics. There were several discussions about whether the voice-over is perceived as heavy and authoritative or warm and friendly. Several examples were considered. What is the power relationship between the people in the film and the audience? Should it be like a conversation and or a preacher’s monologue?

Despite the difficulty of the editor having to leave mid-way, the KISS team still managed to produce two versions to experiment with the possibilities of voice-over as dialogue and as storytelling in the voice of an elder or friend.

Language of the Film

Knowing that we were dealing with multiple languages and diverse groups, this decision as to what language will the film be made in had to be taken carefully, based on the range of the audience. Santhali was chosen as the language of the film by the PRADAN team whereas street Odiya was considered appropriate by KISS. The Kui group was considered too small a language group to be a viable audience group although the film was shot in an area where Kui was spoken. In addition, we made an important decision to use English terms such as protein, calcium and vitamins for ease and also because we wanted some of these terms to find place in the local parlance.

Using the spoken word to cross the literacy barrier

The opening montage of the film has a spoken introduction about CHIRAG, which serves as a short preface. It also introduces the title of the film.

Similarly, the team decided that the closing credits would be read aloud too, at least the names of those people and places that would be recognized by the local audience such as the youth volunteer who shot the film, the village location, the people who supported production, the local musicians and the people in the film. This helped the unlettered audience to identify the local people, who were part of the production and had helped author it. This was followed by the normal credit roll that included the rest of the technical credits.

The team accepted the two important suggestions emanating from the collective GRTA meeting in March 2021. First, it was decided that the issue of unhealthy ingredients such as refined flour and sugar, which have found their way into traditional recipes, would be highlighted. Information about this would be included in the voice-over, which would end as a question to the audience. Second, value was found in including the traditional recipes on the screen because the ingredients that go into a dish are fairly unconventional. A recipe slide was incorporated to show both the ingredients and its nutritional value.

Subtitling makes the films accessible to all, without losing their ground; they make the films more universal. Decisions regarding subtitles and name tags and their relative importance to varied audiences became strategic decisions because these decide the centrality of the audience and how to cater to them.

The team was also trained in the principles of subtitle creation and rendition, such as condensing the text without disturbing the visual flow. The two films, Banwar Peetha and Red Ant are now featured on the Table-to-farm videos map, created by Youth Alliance for Zero Hunger, in line with the UN Food Systems Summit 2021.

Sehjo Singh, an independent film-maker for more than 20 years, was Advisor for Participatory Films on Project CHIRAG. Her films examine critical issues of land struggle and the right to education, trying to find newer and different ways of connecting social movement and society. She served as Executive Director, National Centre for Advocacy Studies, and later as the Director, Programmes and Policy, for ActionAid India. She served as Mission Specialist for Industree Foundation and International Trade centre, Ethiopia, Africa.