The State-Society Interaction: A Developmental Debate 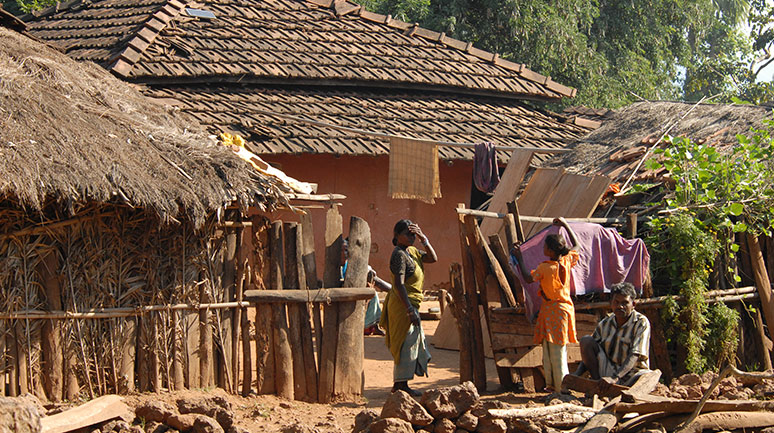 Do the changes being slowly inculcated in tribal life, represented by the adivasis of Kewlajhiri, add up to development? Do traditional practices, customs, beliefs need to be shed in order to bring about transformation in people’s lives? Does the government take into account the wealth of traditional wisdom when it determines how to develop a village?

T HIS ARTICLE IS BASED IN A small village in Betul tehsil, which lies in the southern-most part of the state of Madhya Pradesh (MP) in India. Kewlajhiri is a small forest village situated at a distance of 4 km from NH 69, with poor road connectivity. It is a Gond-dominated village with four Yadav families, who belong to the Other Backward Class (OBC), and one Vishwakarma family belonging to the Scheduled Caste; thus 92.7% belong to the ST population. The total population of this village in 2011 was 641; with 327 men and 314 women and thus a sex ratio of 960 women per 1000 men. The literacy rate in Kewlajhiri is 58.4%.

Communicating through numbers has its own limitations because the diversity of human life is not reflected in them. Different boundaries1—physical, mental, spatial, territorial, etc—get created when one talks about management of and thereby the administration of any population. We usually have Census, National Family and Health Surveys, Socio-Economic Caste Census and many related policies emerging from such simplifications which mostly regulate the direction in which a poor’s life would be turned towards. Such details of the boundaries from the country to the state to the village are simplifications of the variations and the diversities that exist within each of these levels. Such simplifications made by the state—with the intent to govern us—“are always far more static and schematic than the actual social phenomena they presume to typify… It can no more reflect the actual complexity of a farmer’s experience...” (Scott 1998, 46-47). The complexities of human life vis-à-vis its fundamental processes are neither accommodated nor entertained in any record books of the modern state.

Doubtless, there are far more complex nuances in society than these numbers may reflect. The complexities of human life visà- vis its fundamental processes are neither accommodated nor entertained in any record books of the modern state. This divorce from the nuances has neither proved to be beneficial to the common man, that is, the governed, nor has it helped the system make any significant impact on the lives of the people it is meant to serve.