Santhal women and their right to inherit ancestral property 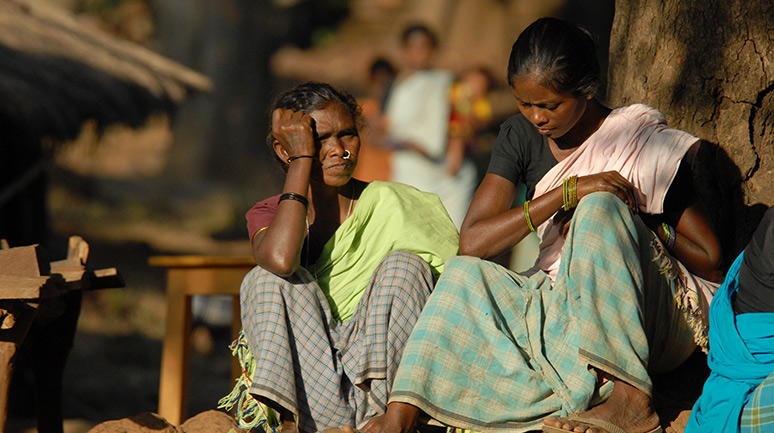 Capturing the struggle of Santhal women of Poraiyahat block in Jharkhand are facing to inherit ancestral property, this article chronicles their pain in accessing their rights, according to the provisions of the tribe’s customary laws. It also examines the differences in implementation of customary practices in the two nearby districts of Santhal Pargana region of Jharkhand, that is, Godda and Dumka, and their implications. Women are now finding ways to claim their ancestral property by participating in traditional meetings in villages and raising their voice.

S unita Kisku, an unmarried woman, lives alone in Basti tola of Siktiya village in Poraiyahat block. She has four sisters, who are married. Sunita is around 45 years but appears much older. Her father died when she was very young. Her mother died in 2012. When her mother died, her cousins asked her to do the rituals. One of the rituals is to feed all the villagers; she was unable to do this because she didn’t have enough money or resources at that time. Her cousins then decided that they would do some of the rituals such as mukhaagni (lighting the funeral pyre), which was done by the son of her father’s elder brother. This is a very important ritual for Santhals in Poraiyahat, in terms of inheriting ancestral property. After the cremation, her cousins organized a Jati Panchayat, to which she was invited. It was decided there that she would be given only 0.6 acres of land out of 5.5 acres; the rest would be distributed among her cousins (men). They also decided that Sunita would do all the rituals during festivals for her other sisters and their families. Sunita remained mute, unable to speak against this.

Mala Murmu (name changed) lives in Raghunathpur village of Poraiyahat block. A while ago, she became pregnant and her family was very happy. When, however, her family members came to know that the foetus was a girl, they wanted Mala to have an abortion. They already had four daughters and they wanted a son because the daughters would not be able to inherit their property. She got the child aborted by the local quack.

Many such cases, like these, are there in the villages of Poraiyahat block. Some want their daughter to get married to a boy, who is ready to stay with them in their home so that they can live a comfortable life in their old age. Some want their daughters to be given their property because it is their right. They do not want the property to go to their nephews. Some are already fighting for this while some are still mulling over this. Some are fighting in their village’s Jati Panchayat whereas some have even taken their cases to court. Single women, widows, deserted women are facing the brunt of this customary practice. The effect of this practice is so huge that even the non-tribals in tribal-dominated villages have started denying women the right to inherit ancestral property. Phoolmuni Devi and Dayamuni Devi of Madaiyya caste live in Sijua village. They are non-tribals. They face a similar problem as the Santhal women. The situation has deteriorated to such a level that when Mahdev Lal Hansda of Dudhiyabari hamlet, Liladah village, started constructing his house, he was asked by his brothers and nephews for whom he is constructing the house. Mahadev Lal Hansda has four daughters and no son.

Legal options and the traditional and customary practices

A lthough there are many laws regarding land and property rights in India, but the law which deals with the right to inherit ancestral property in this region, that is, in Santhal Parganas region of Jharkhand, is Santhal Parganas Tenancy (Supplementary Provisions) Act 1949.

This Act recognizes only the ghar jamai (where the son-in-law lives in his wife’s home) form of marriage, a customary practice of the Santhal tribe, through which a father can transfer his property to his son-in-law, who is just like his adopted son. The son-in-law has to give up his part of any property he may have got from his father. Even the Santal Parganas Tenancy (Supplementary Provisions) Act 1949 does not give a Santhal woman the right to inherit ancestral property. The property is actually transferred to the son-in-law.

If in a Santhal family, the son is very young and the daughters are older; if there is no one who can plough the land; or the father of the family is so old that he is not able to till the land, a girl of the family is married to a boy, who stays in his in-laws’ home and helps them. Such an arrangement is for a certain period of time. When the son of the house grows up and is ready, the ghar di jamai and his family return to his parents’ home.

If in a Santhal tribe family there is no son, the family decides to marry a daughter or all the daughters to boys, who are willing to stay in their in-laws’ home. The boy leaves his family and stays with his wife and his in-laws. The decision to have a Ghar Jamai type of arrangement must be agree to by all the male members of the family. If the property belongs to only one person, it is easy. If the land is in the name of more than one man, it is complicated. For example, Sonalal Soren has three daughters and no son; his ancestral property is in his name and it’s easy for him to have a Ghar Jamai . If Sonalal has brothers and the property is in all their names, however, Sonalal has to take the permission of his brothers before going for Ghar Jamai form of marriage. In most cases, the girl’s father fails to convince his brothers for the simple reason that if there is no Ghar Jamai , then, on his demise, his share of the property will go to his brothers and subsequently to his brothers’ sons. Therefore, it is in the interest of the brothers that a father does not have a Ghar Jamai .

Second, there is a clan system among Santhals. Girls are married outside their clan, for example, Murmu girls do not get married to a Murmu boy. When there is a Ghar Jamai , another clan’ boy enters the family and his children adopt father’s boy’s title. For example, Sushila Murmu married Manvel Soren; their children will be Soren and not Murmu. Therefore, when a Ghar Jamai comes into the family, he brings his title as well. This is not appreciated in the family or the village. Santhal villages usually comprise the same clan. Whenever a new clan enters their family or village, they resist. When there is a Ghar Jamai , they think their land is going to another clan.

Customs and Practices in Different Villages

W omen’s Self-Help Groups (SHGs) are present in almost all the villages of Poraiyahat block. At the block-level, is a Federation of SHGs named Ekta Mahila Vikas Manch. Addressing women’s issues has remained one of the core agendas of these SHGs. Although the women of these SHGs already know this issue, nobody came forward to talk about it. When the SHG women of Dhenukatta village staged a play, this issue came into the limelight.

Some of the cases of women fighting for their rights were presented to them and their views sought. The workshop sought to sensitize the Manjhi Hadams so that the injustice the women have been facing is stopped. By the end of this workshop, the Manjhi Hadams agreed to allow women to participate in their traditional meetings. They also agreed to discuss the issue with the larger community because they alone could not take a decision on it. They said they needed to seek the support of the entire Santhal samaj.

Following the workshop, some women participated in the meeting called by the Manjhi Hadams. They had varied experiences. Two of them, Binita Marandi of Dhenukatta village and Chunnu Basky of Dahupaghar, were successful in exerting their rights. Binita Marandi went to her father’s land in a village in Ramagarh block, Dumka district, to extract the resources from the land. She cut four trees and brought the timber to her home. Although her cousins got to know about it, they did not object. Chunnu Marandi called for a traditional meeting and succeeded in establishing her right on the land. which her father had given her before his death. By preparing documents in the name of his three daughters before his death, her father eased the process for his daughters to transfer the land to their names. This helped them immensely.

The right to inherit ancestral property has remained a matter of concern for women across communities. The case of Santhal women, however, is different. Here, even if there is no son in the family, the women cannot inherit ancestral property. The women of Poraiyahat block have recognized this issue and the consequences of it. They have also started to raise their voice for justice. Although the path is difficult, it is not impossible. Some movement towards it has already happened in this region. The women, who are struggling, have decided that they will meet periodically and seek help from each other. They have also decided that they will seek support from SHGs and their tier collectives such as village organizations, Cluster-level Federations and block-level Federations. They will continue raising their voice till they get justice. Now, they have a platform to raise their voice. All of them can participate in the village-level traditional meetings, organized by the Manjhi Hadams. It depends on the women how differently they will deal with this issue. They want to bring about change in the customary practice. They are thinking of changing the statutory provisions because it is the community that decides what laws should be made in the country.

Mehmood Hasan joined PRADAN in 2008 and is based in Jharkhand. He is the Team Coordinator and mentors a team of young professionals, working at the grass roots. He has been working with women collectives in the Santhal Pargana region and his area of interest is livelihoods and gender equality. Mehmood holds a Master’s degree in Economics from Dr. B R Ambedkar University, Agra, and Masters in Social Work from Aligarh Muslim University.