Rain-fed rivers usually run dry in the months before the monsoon season. Rejuvenating a river is a complex, highly skilled and an essential process in order to sustain life and livelihoods all along its banks.

T he rivers of our country may be divided into two broad categories. Some rivers originate in the Himalayas. In addition to rainfall, these rivers also benefit from the melting of the accumulated ice cap of the mountains. The other set of rivers are entirely rain-fed, receiving water from the annual rainfall alone; in non-rainy seasons, their flow is limited to the extent of inflow of water from seepage through the soil mass of its catchment. If the rain fails, the area remains ‘thirsty’; rivers remain dry or have less water.

I will confine this article to the rejuvenation of rain-fed rivers only. There may remain possibilities of mistakes in my assumptions and analyses; this is reason enough to share it with my friends so that you contribute to rectifying mistakes and help in developing a deeper and better understanding of the rejuvenation of rivers.

There may be other demands too; however, let us move with these minimum points.

Let us try to prepare a hypothetical hydrological balance sheet of a catchment. 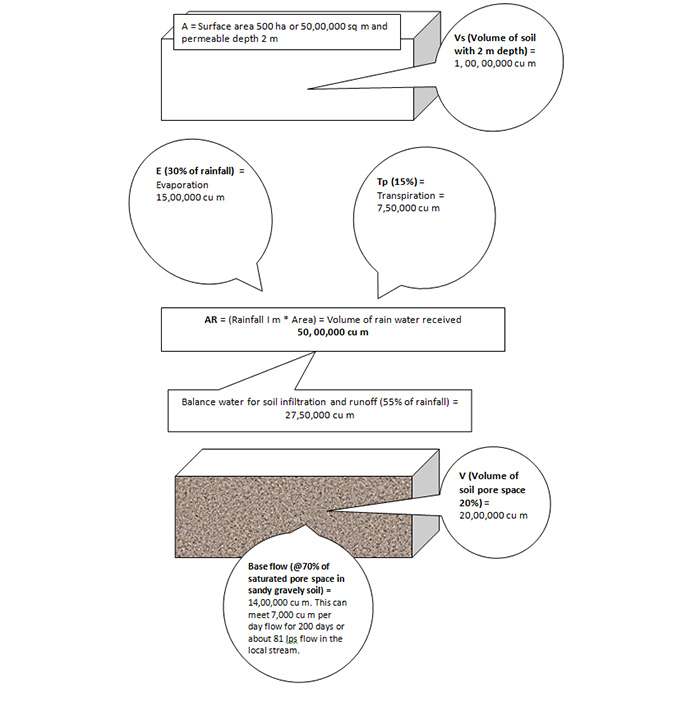 Calculations (rephrasing the above in words):

We know, however, that the water demand of the population is more or less uniformly distributed through the year and is generated on a day-to-day basis. To make the calculations easy, let us divide the year into three seasons, each of four months.

During the four rainy months (say July to October), only one-third of the total demand or 7,00,000 cu m of 21,00,000 cu m (Total additional water demand that is required to meet the life and livelihoods i.e. F + I) will be utilized, leaving a balance 20,50,000 cu m, to be absorbed by the soil mass of the entire catchment area. Let us assume, because it is the rainy season, that this is taken directly from the rain and not from the soil mass.

By the next four months (November to February), an additional 7,00,000 will be used by people, exhausting (un-saturating) the one-third thickness 2 m soil mass.

This means that by the end of the rainy season, the entire 1,00,00,000 cu m of the soil mass will yield seepage water due to hydraulic conductivity; by May, however, only one-third of the soil mass, or about 33,00,000 cu m soil mass, will contribute to seepage. Again, assuming that the soil texture is of the sandy, gravelly type, it has 20 per cent pore space, of which 60 per cent approximately will be gravitational water. This means about 3,96,000 cu m water will contribute to the base flow.

There are other complex phenomena. People start drawing water (from wells) for irrigation from about December. Till then, because of the natural hydraulic movement from October to December for about 60 to 100 days (depending on when they actually start drawing ground water), gravitational water has already travelled down the topo-sequence, that is, it has travelled about 0.6 km to 1 km downstream. Thus, by that time, water is available only in the downstream areas of the catchment within I km from the lowest part of the catchment.

In the case of more gravelly soil, hydraulic conductivity will be faster (could be 20 m a day) and the above calculations will accordingly change.

Let us build an alternative scenario (because the physical properties of the soil and other terrain features vary a lot).

Some research organization, somewhere in the world may have worked on and tested such an equation. I am not aware of it. My sincere request to readers of this article is to inform me about any such work done in our country. If not, we need to take up research projects on this. There has to be decentralised research across different river basins in different agro-climatic regions.

Let us assume a river has a catchment area of 1000 sq km or 100,000 ha and has been divided into 200 micro watersheds, each one of 500 ha. We need to plan for each of these 200 micro watersheds to ensure the visualized rejuvenated river. How should we approach to this? Here are some suggestive steps,

Tasks to develop a model applicable to local context

Some References Used in This Theoretical Model

About the physical properties of the soil and its relationship with water holding capacity:

Now let us understand those physical properties of soil that influence the movement of water within it. 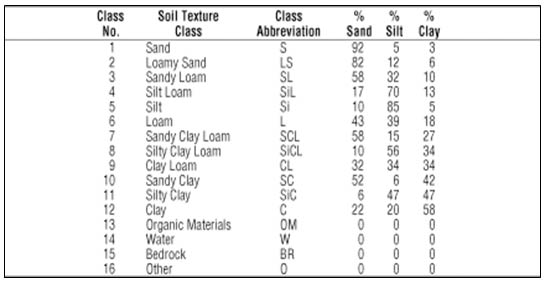 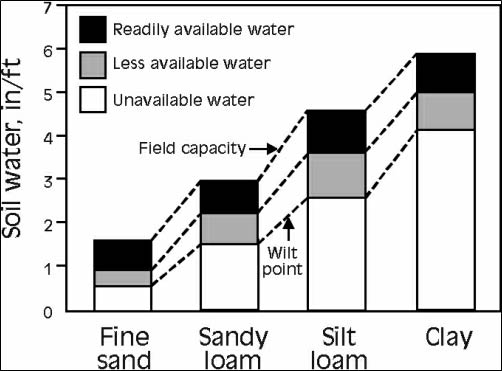 Calculating gravitational water from the above data.

Dinabandhu Karmakar has been responsible for promoting Integrated Natural Resource Management (INRM) in different agro-climate zones in India and Africa. His innovations have been recognized as an approach to INRM that enhances local people’s livelihoods instead of focusing solely on conservation. He held leadership positions over 25 years in PRADAN, to promote locally appropriate activities to improve rural livelihoods. Currently, he is working as a freelance consultant.