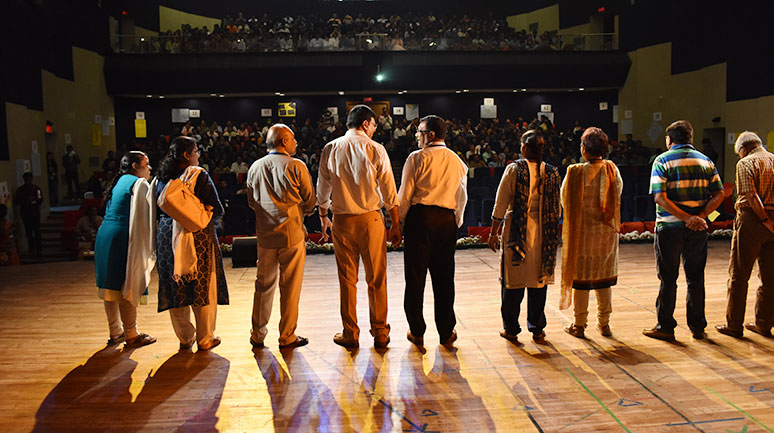 Looking back, memories bring alive the passion, drive, excitement, joy, total involvement and conviction about development work that each member of PRADAN shared… “We did it anyway!”

T he first time I met Vijay Mahajan, I was in for a rude shock. This was 30 years ago and Vijay was probably 27 years old. I thought he would be a big man with a big belly, probably between 50 and 60 years of age—hence, I was a little wary of meeting him. Nevertheless, when I did meet him, I thought, “Arre, yeh to ekdum hamare jaisa hai—bindaas and ekdum laid back (Hey, he’s exactly like one of us-carefree and completely laid back).” I was relieved.

After our initial contact, he invited me to one of the project locations of ASEEFA, to explore the possibility of my joining there. The purpose of this in Vijay’s mind, I think, was to understand this ‘development wallah’ and to gauge the level of his/her excitement to be in the field. In those days, there was a lot of lift irrigation work that was being implemented around Gaya and he wanted me to see that. Therefore, we started from Gaya in an old pick-up van kind of thing, which carried many other things besides us, including PVC pipes and other material. Through the journey, I realized that Vijay was not only a manager but also a hands-on worker. He was teaching things, telling people what to do, what not to do, training people on the job and guiding people all at the same time. He performed many roles at the same time, not content with being a mere manager. It was very different from how I thought ‘NGO work’ would be done. The kind of looseness that is assumed would be there in a voluntary organization was not there

It was very different from how I thought ‘NGO work’ would be done. The kind of looseness that is assumed would be there in a voluntary organization was not there

As we travelled in this pick-up van, we stopped at many places, picking up people and dropping them, creating a lot of hustle bustle. As the van crossed a bridge, he asked me, “Look, Achintya, look at that stream. How can we measure the flow of the stream?” It seemed a very technical question. I looked at him and wondered how I should answer this question. I did not know his background. “Tell me your background, so that I can answer your question accordingly,” I said. I thought that if he were a technical person, I would give him a technical answer; and if he were not, I would use a simpler explanation to help him understand.

He answered, “Well, I am a technically trained person.” I said, “I do not understand.” I thought, “Arre yaar, yeh aadmi to bara gol gol jawaab de raha hai. Samajh mein nahee aaya (This man gives such convoluted answers. I can’t understand him).” I tried again, “So, what have you been trained in? Where and what have you studied? And what is the degree that you have?” He replied, “I am an engineer.” I presumed he must be diploma holder or some such. “Are you a diploma holder or a degree holder?” my questioning continued. He said, “I am a degree holder.” I said “Achcha? From which institute did you get your degree?” He said in a very nonchalant way, “I am from IIT.” ‘Oh my God!’ I thought.

chintya Ghosh joined PRADAN in 1983. He served as Executive Director of PRADAN from 1997-2002. He is also the founder of Kabil - a not-for-profit society