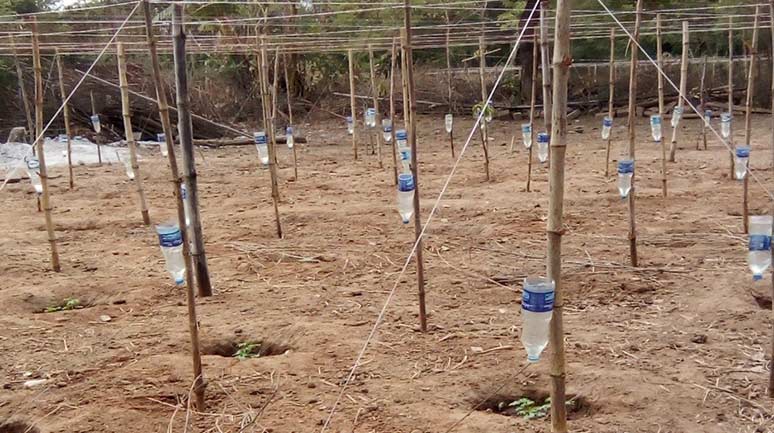 Finding a new use for discarded plastic bottles, now a ubiquitous and deathly hazard to the environment, a little revolution is underway in a tiny block in Khunti district, where tribal farmers are using it to water their crops in an innovative way through machan cultivation, opening up possibilities of greening land that lies arid most of the year.

D ID YOU EVER THINK THAT the waste plastic bottle, which creates pollution, can ever be used for agriculture, especially in drought prone areas? Yes, it is being done by the tribal communities of Karra block of Khunti district, Jharkhand, by utilising discarded plastic bottles in farming.

The farmers of Karra block have experimented with using an advanced and unique technique of machan (trellis) cultivation with bottle irrigation, which has transformed their drought-hit terrain into a green area. Karra is a drought-prone block, with acute water shortage, leading to an alarming food security situation. Almost 25 per cent of the households migrate, usually from December and up to June. Some of the families migrate for more than 10 months because there is very little engagement in agricultural activity during that period due to shortage of water. Machan cultivation, or a ‘multi-tier’ system of cultivation, involves the simultaneous growing of multiple crops on the same land, to fully utilize vertical growing spaces, with the help of used plastic bottles for irrigation.

Machan cultivation, or a ‘multi-tier’ system of cultivation, involves the simultaneous growing of multiple crops on the same land, to fully utilize vertical growing spaces, with the help of used plastic bottles for irrigation

The Indian Gramin Services (IGS), with financial help from the Indo-Global Social Service Society (IGSSS), incubated the concept of machan cultivation with bottle irrigation in this community towards the end of 2015. Machan cultivation, or a ‘multi-tier’ system of cultivation, involves the simultaneous growing of multiple crops on the same land, to fully utilize vertical growing spaces, with the help of used plastic bottles for irrigation.

IGS has acted as a catalyst for change in this area through the implementation of the ‘Creating Livelihood Adaptation under Drought (CLAD)’ project under IGSSS. The objective is to increase climate-resilient farming, to overcome adverse socioenvironmental conditions. The families in these villages suffered from such extreme water crisis that when we asked them about the cultivation of creeper crops, their one and only one answer was. “Humare gaon mein pani ki bahut samasyaa rahti hai, isliye hum logon ko bade paimane pe kheti karne me bahut dikkat aati hai (We have an acute water scarcity in our village, so cultivating on a large scale is a big problem for us).”

Against this backdrop and through intensive participation and interactive exercises, IGS sowed the concept of machan cultivation. With the use of local available bamboo, polymer wire and fishing net wire, a machan is constructed and waste water bottles are used as an irrigation source.

In late 2015, Ranjan Sanga was the first farmer in Ludru village to come forward and experiment with machan cultivation through bottle irrigation. Earlier, he cultivated paddy and grew creepers on the ground. He did not get a good quality of vegetables because the vegetable crop would rot and be infested with pests. Until two years ago, his family used to struggle to sustain themselves in the peak summer season. After he adopted machan cultivation, however, he plants ridge gourd and pointed gourd in the machan and planted chilli and tomato on the ground. He now remains very busy plucking and marketing his produce all through the year. The method of cultivation has enhanced his income by more than Rs 10,000 per month.