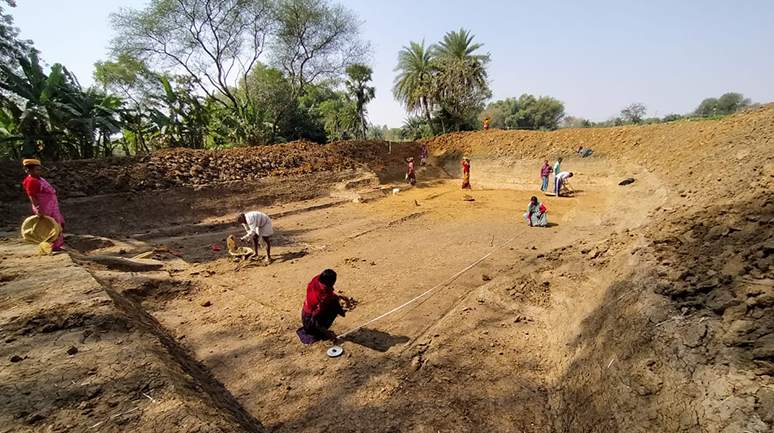 Persuading the women farmers to set aside some land for creating water harvesting structures seemed a Herculean challenge initially; however, when they saw the numerous benefits and ways to increase their household income, they became crusaders espousing the project and encouraging others to follow suit!


"Where real work is done, it is visible; there’s no explanation needed,” said the Sub-divisional officer (SDO) of Jhargram Sub-Division, Jhargram district, West Bengal, on a bright sunny day in June 2021. The officer had come to inspect the Jwalochhas micro-watershed under the USHARMUKTI project; we took him to a series of ponds in a patch, where the village women were rearing fingerlings from spawns, and began explaining the processes and activities to him. He waved off our explanations because the work completed was evident for him to see.

T he SDO’s statement made me recall the time, not so long ago, when such a thing was considered impossible; today, the impact of the journey we undertook is there for all to see. The micro-watershed activity was developed under the West Bengal government’s USHARMUKTI project. The project aims at rejuvenating the dying rivers through watersheds. Apart from the ecological benefits, USHARMUKTI also aims at increasing the pace of MGNREGA implementation and generating livelihoods via an increase in MGNREGA person-days and, in the process, creating permanent livelihood assets.

Let us journey back through the six villages in Harinagunj booth in Dharampur gram panchayat of Binpur I block; a few villagers, reluctantly at first, showed us some land they did not value or use, for planning schemes such as the Jwalochhas micro-watershed. At that point, the villagers did this out of pity for us because we had been trying to persuade them for months. Although I was convinced that creating these watersheds would be very beneficial, the villagers were simply not interested. I tried to convince the villagers that once they had the water harvesting structure, they would have sufficient water to irrigate their fields. The water they harvested would also recharge their wells.

This entire process of planning, implementation and livelihoods generation was led by women farmers. Earlier, the stakeholders, the community members and even their own families had no faith in the abilities of these women. After having demonstrated all the activities successfully, however, the women became the acknowledged and sought-after change agents.

One of the SHG members said agitatedly, “You people from cities waste so much of water. You have tap water running in your house every day and yet you tell us to conserve water. We don’t waste water. Mini bondho kore dile chash hobe na, khabo ki? (If we stop using groundwater, our crops will not grow. What will we eat?)” That struck me hard. I realized that what she was saying was true. We, city dwellers, waste water every day and are least bothered about conserving it in our daily life. And, I also knew depending on groundwater perennially is not a sustainable solution. Perhaps, the villagers find dug wells an easier option than water harvesting; however, the water would not last for long. The community was not convinced. Most lackadaisically, therefore, they showed us some areas where water harvesting structures could be developed.

I wanted them to own the idea that it was their land and their lives and their future. Therefore, the solution must also be theirs. I stepped back and reflected on what I had done so far and the responses it had yielded and, finally, decided that I would have to change my strategy. The following day, I went back to the same community. I asked them what, according to them, were the problems we had been talking about and what could be the possible solutions. They started opening up to me after that. They said they needed money, they needed livelihoods. They decided that a livelihood plan needs to be integrated with the watershed project. 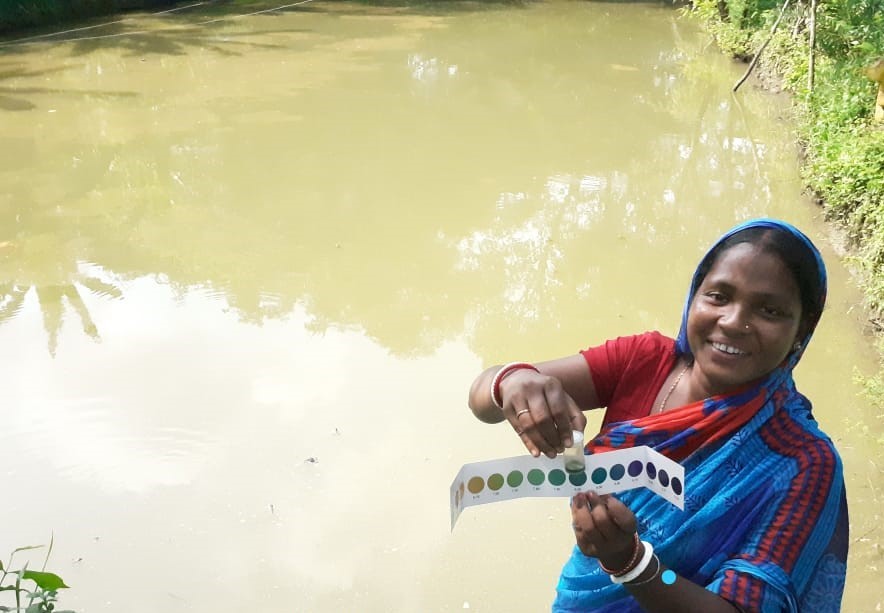 Kakali Mahata, a farmer from Baghghora village, Binpur I block, testing the PH level of her farm pond for fish rearing


W orking on a project on watershed management, in collaboration with the government, I learned that development is not possible when the basic needs of people are not met.

Initially, we (the PRADAN team in Jhargram) started explaining the principles of watershed management to the community. However, the villagers were not bothered about the depleting groundwater, soil erosion, lack of recharge and water harvesting because they saw no direct loss or gain from these. I remember Thakurmoni Murmu of Mohanpur village saying, “Didi, nijer pet banchale tobe toh prokritir bepare bhabbo (Only when we have enough food for ourselves can we think about the ecology?)” People did not want to stop using groundwater because at least they could grow crops for one more season. Everyone thought digging a pond in their valuable paddy land would be a loss of the land. Try as we much as we did, we could not convince the community to plan structures (such as plantation in the upland areas, farm ponds in the medium uplands, and seepage tanks in the lowlands) to ensure watershed development. People thought if they implemented these plans on their land, the cultivable area would decrease and they would get less yield; hence, using groundwater was the only option for them.

We persisted. We conducted focussed group discussions and video shows, and arranged for field visits to areas where people have reaped the benefits from watersheds. The villagers interacted with farmers, who had constructed farm ponds in their fields and were told that the overall availability of water in the village increased. Farmers shared that their irrigation cost had reduced and they could cultivate a second crop on the same land! We kept on engaging with the community for months because, at the end of the day, it was their land on which we wanted to implement the watershed management schemes.

Finally, 13 families were ready to take the risk. They were the first to trust the idea and begin implementation of the scheme on their land. In the first year, six farm ponds and seven orchards were developed. Once the assets were completed, the focus was to put the energy into generating livelihoods. Farmers were trained to cultivate vegetables, rear fish in the farm ponds and other interventions that helped increase their income from the same farm. In a personal interview, Sushama Mahata, who got a pond excavated in 12 decimals of her land, said that she sold paddy worth Rs 1200-1500 from the land and Rs10,200 worth of fish in the first year itself. She also grew vegetables through the kharif and the rabi seasons that fetched her Rs 24,100.


G radually, when other farmers saw that they could cultivate vegetables with the pond water and engage in rearing fish, the numbers began to increase. These livelihood options were not only novel to them but also more remunerative than their present practices. These generated more benefits than they, and even I, could imagine. Not only were structures being planned and implemented following the principles of watershed development, people were getting more work under MGNREGA (from an average of 15–20 days a year as wage labour to more than 80 days a year now). Underground seepage was clearly visible. The villagers even started digging ponds near the water sources so that they could harvest and recycle the water used.

This entire process of planning, implementation and livelihoods generation was led by women farmers. Earlier, the stakeholders, the community members and even their own families had no faith in the abilities of these women. After having demonstrated all the activities successfully, however, the women became the acknowledged and sought-after change agents. Their position changed among the stakeholders, their community members, the political people and within their households. “Amar poramorsho ekhon sobai naaye (Now everyone seeks my advice),” says Dipali Mahata from Korganala village.

Women like Dipali have also been identified as job supervisors under MGNREGA and are working hand-in-hand with the local gram panchayat to implement government schemes. Political leaders, who were job supervisors all these years and had once opposed the entry of women, now ask them for help and invite them to learn the technicalities; together, they are executing more schemes. The villagers too remark that they have not seen so many works done under MGNREGA “in a hundred years!”

There are 85 farmers implementing the Jwalochhas micro-watershed scheme, who are engaged in a comprehensive livelihood basket. They have managed to earn an additional average annual income of Rs 20,000 per family. Table 1 shows the increase in income of three farmers within one year of intervention. These three women also influenced the other farmers of the village.

I n August 2021, in a course of three more years, 46 pond and 36 plantation (23 ha) schemes have been completed; there are plans for excavation of 36 more farm ponds by 2024. People need no persuasion now. Instead, they wait for us to submit plans and get their works done. The watershed has become one of the model watersheds of the district due to the rate of implementation and adoption of new models of livelihood such as fisheries and vegetable cultivation; it has demonstrated a model ground for fisheries for the entire block.

With this success, the women got recognition, and other departments are motivated to pilot new interventions with the community. The District Director of Agriculture provided three kilos of ragi seeds for trial in the villages. Bidhan Chandra Krishi Vishwavidyalaya (BCKV) has offered the women clusters small farm implements to reduce their drudgery. The women received appreciation and recognition for their efforts as did the others, who were supporting the implementation of work. The Nirman Sahayak (NS) of the Dharampur gram panchayat is one of the best performing in the block, with the highest percentage of implementation of watershed activities; he has also become very appreciative and accepting of us and the community.

While planning and implementing the USHARMUKTI project, PRADAN (the lead CSO) received acknowledgement for its technical and physical support; the administration now asks for our opinions when grounding projects and schemes.

From this experience, it was clear to me that people get attracted to the things they find beneficial and we, as facilitators of change, must identify the needs of the community, and design our facilitation around it. We also need to demonstrate that our ideas are beneficial; only then will people come up with more plans. Thus, impacting livelihoods has been a major factor for this paradigm shift. I also learned that we have to work on the entire chain: district–block–panchayat as well as the local leaders so that the system runs smoothly even without our support or intervention; and the villagers can claim and access their rights and entitlements. Also, the investment made on the community women, to ensure complete and correct planning and supervision, has increased the pool of cadres willing to help us in this humungous task; The community is happy that under its supervision, the quality of assets is ensured, leading them to have faith in the entire system of MGNREGA and, thus, submitting greater number of plans for implementation. This could be brought about by the community taking ownership and participating in the project, gradually leading to sustainability.

This may be the conclusion to this article; however, I know that this is just the beginning, the inception of our journey—a journey that dreams of converting 25% of the total cultivable land into water bodies. And if you wish to witness it with your own eyes, or have a taste of the fresh fish accompanied by fresh vegetables, Sukhada Murmu, the senior-most planning and monitoring committee member, extends you a “Sagun Daram! (Heartiest welcome!)”

Barni Chatterjee joined PRADAN as a Development Apprentice after pursuing her Masters in Economics from University of Calcutta. She has been working in PRADAN’s Lalgarh team in West Bengal for last six years with women collectives on issues of gender equality, livelihood and natural resource management.