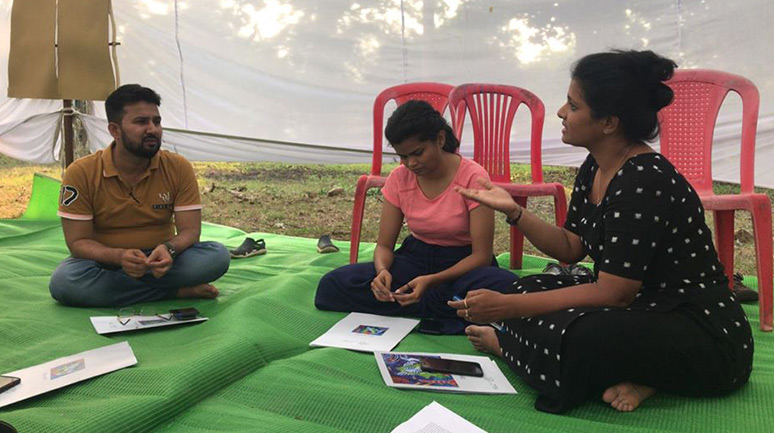 Breaking the gender glass ceiling is not a new subject; it surfaces again and again. However, it is a newfound passion for me. I have been working in a not-for-profit organisation called PRADAN for the last 22 years. We work in the field of women’s empowerment and livelihoods. It took us quite some time to realize that economic gains are not the be-all and end-all for gender equality. It is about voice, choice and space. The news of nine women sportspersons being recommended by the Sports Ministry this year for the Padma awards and Santwana Simran, a Koraputia desia tribal lady (Koraput is one of the poorest districts of Odisha, the poorest state of India), winning the Miss India International Photogenic award in Jakarta is heartening. I feel more connected to the issue of creating a gender equal space, beginning with my own organization. I believe if each one of us makes efforts to ensure that our own spaces are more equal, it will automatically inch us towards making society a more equal space. I say ‘inch’ us towards because we are so plagued by our patriarchal heritage and upbringing that not only men but the women of our society will take a long time to seek support and create an equal space.

On December 12, 2019, I attended the ‘Women in Sustainability’ (WiS) networking event at Kunzum Café of Hauz Khas village in Delhi. It was raining when I got down from the car and quite dark even at 6 pm and I, at the age of 52, was feeling jittery and scared to go into the dimly lighted dingy lanes to reach the café. I was curious about the WiS networking event. I was pleasantly surprised to see 20–25 young women (only three of us, including me, were above 50; the rest were between 20 and 35 years) and three men (including the owner of the café) present. They were from many walks of life starting from a retired civil servant to an environmental scientist doing her PhD from the University of Chicago; someone who had just relocated to the city to someone who had spent their whole life in this city. Many of them were young researchers and some were hard-core technical experts, largely from the field of energy, because the WiS is an initiative of the Council on Energy, Environment and Water (CEEW). All had come with the purpose of reaching out to someone else, to get connected and to share their stories of being discriminated against!

After a short round of introductions, Harsimron, one of the researchers from CEEW, presented to us an article on ‘Data Gaps’ from the book, Invisible Women. It talked about data biases against women in work spaces. She presented the salient points, which connected us to our stories...of being discriminated against in our professional/personal life. At different points, one of us would interject to say, “I have experienced this,” and narrate her story. The discussion ranged from what ‘meritocracy’ means in a man’s world, to what is meant by ‘best’/’fit’ person for hiring managers; to whether men actually think about women in their team/organization; to not being noticed/looked at by government officials even if the project idea is yours instead of your male colleague, who might even be junior to you, getting all the attention; and of structural issues as well as of getting stalled in your career, to how women and men, both, don’t see women as naturally brilliant but are more appreciated for their femininity. Why should women do what men tend to do?

The group resolved to call out men who are discriminating or/and sexist, and engage them in difficult dialogues. Feeling quite threatened, one of the men in the room asked if all the mistakes were committed only by men? Why didn’t you invite more men to join this discussion? And the response from the other quarter was quite unanimous: the invite didn’t say this network event is only for women.

Listening to all this, I smiled within myself; it is the same in both the worlds, whether it is in Delhi or Mumbai or in Khatraor Bangla, small block towns in Bankura district, West Bengal, where my colleagues Himadri or Saronmayee face these challenges day in and day out. Himadri finds it challenging to converse with the Block Development Officer. When she discusses the progress of land development and agriculture programmes with him, he seldom makes eye contact with her; instead, he looks at and speaks to Himadri’s colleague, Santanu, and poses all his queries to him (Santanu is an apprentice with Himadri, learning the nitty-gritties of the development work.)

And why should I go so far? Within the organisation, although we have taken baby steps to make PRADAN a better work place for women, we are far from creating a culture where we can proudly say we have a gender-equal workspace. During the first week of December, I conducted an orientation programme for 60 of our Gender Auditors1, of whom 30 were women (Himadri being one of them). During the process, some spoke of how men colleagues hesitate to anchor themes like Gender and Nutrition, and seem reluctant to consider their women colleagues as experts in themes like agriculture, livestock and Integrated Natural Resource Management (INRM). They also spoke about the leadership not showing confidence in the competence of women colleagues to head partnership projects, in which they may have to work extensively with other stakeholders and may have to travel. (Of course, they are doing extremely well in the rural communities they work in, with other stakeholders and those who are less educated and not from similar backgrounds.) As women in the organization, we fall prey to the same stereotype of thinking, “Yes, I am better at Gender, institution building and capacity building.” I too feel hesitant to take up themes such as irrigation, agriculture and livestock. Therefore, at times, we make ourselves unequal and, at other times, we are being treated unequal.

The WiS network group resolved to take some steps to negotiate and create a more equal work space. This will include valuing and being vocal about building a culture whereby all are treated equally, rightfully. Women can help other women claim their rightful space. Having women leaders at critical points of the organogram is crucial to support other women to take the lead and become visible in the organization. They must refrain from politics within self that is, women doing politics and pulling each other down or not supporting each other, and from being competitive with seniors, peers or even juniors, broadening the coalition with men, identifying and trusting men colleagues, who can support their personal and professional development, and sharing and discussing issues, to create systems of gap jumper, by which we create mini assignments for women colleagues, to learn and demonstrate the skills required in higher positions. Friends from CEEW shared good practices in their organization. CEEW reports on Gender Key Performance Indicators (KPIs) to its Board annually. This includes different parameters, for example, the proportion of women in a team; the number of women occupying senior leadership positions; the salary drawn by women in the organization; the first publications of women in the organization. All these features in the Annual Report of the organization. I spoke about the steering group PRADAN has, which oversees all the efforts taken to create a better work place for women in the organization. Women in PRADAN never have had to struggle on account of unequal pay, thanks to the vision of our Founders2 , who introduced PRADAN’s transparent pay policy from its inception. On many counts, PRADAN is ahead on the curve. I am really attracted to the idea of creating and publishing our indicators of ‘Making PRADAN a better place for Women to work’ in the Annual Report. That would be the real test of ‘political will’3 within the organisation.

The WiS network members dispersed with a resolve that the next time (in February 2020) they would persuade their men colleagues to attend the networking session. With the second cycle of the Gender Audit in PRADAN approaching, I resolved to do my bit to create a better place for women to work in PRADAN.

1 We have adopted three strategies: 1. A women’s caucus 2. Two modules on gender for newcomers in our one-year curriculum, and 3) An Annual Gender Audit of teams/work units.

Ms. Smita Mohanty has a PGDM from Xavier Institute of Management ,Bhubaneswar, after graduating in Economic (Hons.). Smita started her career in HRM with Oil Orissa, a subsidiary of NDDB in 1989. She has been with PRADAN since 1997 in various positions. Most part of her stint in PRADAN is in the Human Resource Unit. For 3 years in between, she was also co-lead of the Resource mobilization Communication and Partnerships Unit.