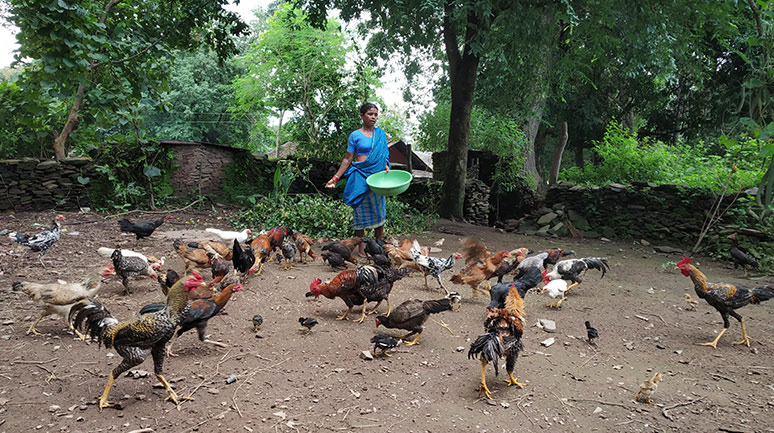 Subati Kashyap from Mangnar village feeding her birds. Starting with 10 birds, she now has a flock size of 73 birds.

Having the knowledge and the tools to carry out an intervention is not enough for a development professional; understanding the perspective and challenges at the grass roots, motivating women farmers and demonstrating the advantages is vital for the implementation and sustainability of backyard poultry farming

I n PRADAN, we often say that we, practitioners, learn by doing. I am happy that there is this environment in PRADAN, through which we are given the scope to learn from our mistakes. In this article, I would like to share my experience of promoting desi (local) backyard poultry (BYP) in the Chingpal cluster of Darbha block, Bastar—what my mistakes and my reflections about them were and how I am now engaged in this activity. I welcome any insights that the readers may have about this once they have read about my experience.

When I joined PRADAN in June 2015, I had been hearing that the magic mantra to promote small livestock is developing a pool of para-vets. In Bastar’s Darbha block, one of our interventions was promoting the goat-rearing activity. Local youth were trained as para-vets to support this activity. The team took the decision that the same para-vets would be trained to support the BYP initiative. However, we saw that many para-vets were dropping out. Perhaps, the team thought, if they were taken to other places where BYP was in practice, they would get motivated to continue with the activity and would see themselves as entrepreneurs. In 2017, we sent 10 para-vets to Gumla in Jharkhand so that they would get a sense of how BYP is operationalized in other places and come back inspired to help set up BYP.

Little did we understand that the problem was not lack of motivation but other factors that we had completely ignored. And the number of para-vets continued to drop because they did not find the job remunerative. When I visited the field areas in Chingpal cluster, Darbha block, I saw that there was a lot of scope for BYP. Data also suggested that almost every family rears BYP. In fact, Aseel, a fighter bird variety in the area, is famous because it is used for cock-fights and large-scale betting. Many people rear Aseel for cock-fighting; in some fights, the bets go as high as Rs 1 lakh.

A lthough there was scope, I sensed that the community was not very interested in increasing the flock. I explored this further with the community, the animal husbandry department and the para-vets, to understand the context better. In the Chingpal cluster, there were 260 SHGs; I conducted focused group discussions (FGDs) with 20 SHGs. One of the major concerns of the women was that the mortality of BYP is very high and, therefore, they were not interested in increasing the flock size. Basanti didi (a Madia tribal woman) from Lendra village said, “Saal mein kam se kam jhumra rog ki wajeh se saara murgi khatam ho jaata hai. Dus mein se ek se do hi murgi bachata hai. Saal mein kam mein do baar hota hai jiski wajah se hum jyada mugi nahi rakhte hai. (Every year, almost all the birds die because of disease. Out of ten birds, only one or two survive. This happens at least twice a year, which is why we do not want to rear poultry).”

The animal husbandry department informed me that Newcastle and Fowl Pox diseases are very common in the area. Mortality from Newcastle disease is almost 100 per cent; the only way is to immunize the birds. Another important intervention is deworming the birds. Immunization on a massive scale is not feasible because of limited staff for door-to-door coverage. And when vaccination camps are organized, very few people turn up.

Vaccination and de-worming are the critical interventions in BYP farming. These steps can drastically reduce the mortality rate in birds.”
Dr. Alok Bhargav (Veterinary and Husbandry Officer, Darbha block)

The para-vets, however, had a different issue—born of an oversight on our part. We had randomly selected educated youth, who showed interest in the activity. The main problem for the drop in their numbers was that they were scattered across Darbha block and there was no scope of cross-learning or even sharing the travel cost to Darbha, to get their stock of medicines from the department. Also, the community was reluctant to vaccinate the birds because they thought it was an unnecessary expenditure.

Little did we understand that the problem was not lack of motivation but other factors that we had completely ignored. And the number of para-vets continued to drop because they did not find the job remunerative

Interestingly, according to the women, BYP is the one activity they considered their own; they could take any decision regarding the BYP themselves. During a training with the SHG women, they used a training module called “Meri sampatti, meri bachat (My wealth, my savings)”, to understand from the women things that they consider their own, and over which they could take decisions. BYP was their sampatti and their SHG savings was their bachat (I realized then why it is so important to promote SHGs).

My understanding of what it means for women to have this wealth and their own savings motivated me to promote BYP with greater fervour so that the women could get the maximum benefit from this activity. Looking at their challenges, I realized that the basic mistake was that we were too dependent on para-vets and had not looked at other factors such as that the activity was being promoted by women. The para-vets, being men, would interact mainly with the menfolk regarding vaccinations, etc. The village men, on the other hand, were not interested in the activity because women have ownership of the birds. Second, the women did not consider BYP as an activity that would generate income. They reared BYP mainly for household consumption, and if any local trader came to their village, they would sell them one or two birds to get some cash.

These findings were good enough for me to put forward my views to village organizations (VOs). I made a cost economics chart to show the women how they could increase their income substantially if they increased the mother unit. The simple math is, one mother unit, on an average, lays 13–15 eggs, of which 10 chicks are hatched. Let us assume that the rearer keeps three birds for personal consumption. With the remaining seven birds, a rearer can easily earn something around Rs 6000. If they increased the mother unit to 5, a poultry farmer could easily earn Rs 30,000. Now, readers, you may find my math unbelievable, but this was good enough to motivate the women SHG members. Another aspect of BYP that helped was that women could rear a larger flock size within the same time without any increase in drudgery. All they needed to do was vaccinate and de-worm the birds regularly and give the birds some supplementary feed. This information found acceptance and, suddenly, I could see the eyes of the SHG members beaming with happiness.

Interestingly, according to the women, BYP is the one activity they considered their own; they could take any decision regarding the BYP themselves. 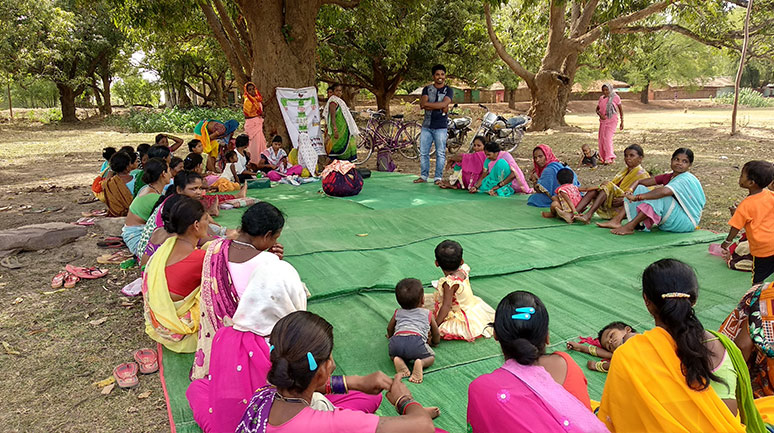 Discussion around the cost economics of BYP with SHG members in village Chhindbahar, Chingpal cluster, Darbha

W ith the SHG members showing willingness to take this activity forward, we thought of possible intervention points. I discussed this with my team members, consulted the animal husbandry department and zeroed in on some of the following intervention points.

In a Pashu Sakhi meeting, we discuss many things and learn from others’ experiences. If need be, we go to other villages to support Pashu Sakhis.”
Budari, Pashu Sakhi, Phoolpadar village 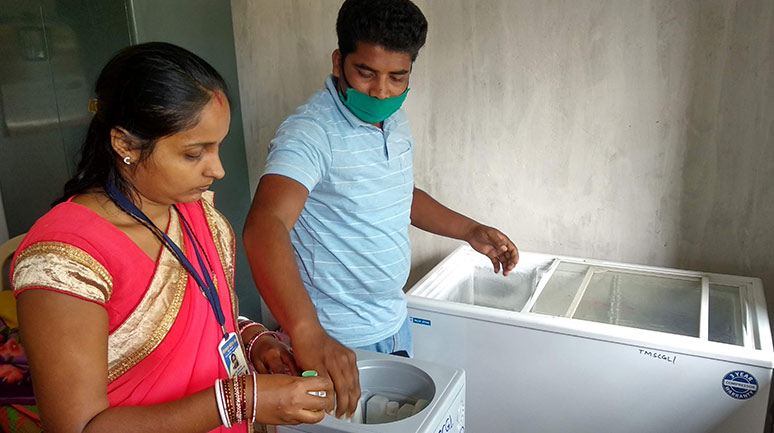 B esides this, we also plan to have an aggregation centre from which vendors can buy birds. This is yet to be initiated, and we are looking for possible intervention points to set up a producer- market interface system.

The intervention has shown visible impact. Table 1 shows the increase in the stock size of women farmers. What is interesting to note here is that the household consumption of poultry is more than the birds that are sold. Rukmani from Gadamguda village says, Earlier, we used to consume the birds only during festivals or some special occasion; now, we consume birds almost every week. My children like eating eggs and meat so I cook for them.” Many other SHG members resonated with

We never knew that desi poultry can fetch us so much income. Now everyone in our SHG has earned on an average of Rs 10,000 from our BYP.”
Sukari, Neganar village

what Rukmani expressed. One SHG member jokingly said that now their husbands also don’t fight because they get chicken to eat quite often. When asked what they did with the income earned, many of them said that they used it for the education of their children. Some said that they go to the market and buy vegetables, spices and other eatables.

Women poultry rearers now regularly check their stock, provide supplementary feed and water, take care of the hens that have laid eggs, and clean the place regularly; some have created separate night shelters for the birds.

Women poultry rearers now regularly check their stock, provide supplementary feed and water, take care of the hens that have laid eggs, and clean the place regularly; some have created separate night shelters for the birds. Rajkumari from Lendra shared, “If by any chance a bird dies, I can’t eat my food that day, I feel so bad.” Another SHG member, Sukari, from Taraiguda said, “I never counted my birds; now because I underwent the training, I keep them very well, get them immunized regularly. I have 56 birds. Last year, I earned Rs 11,000 by selling the birds. All the money is with me. This has really changed my life.”

The whole experience of working with women farmers on BYP gave me an opportunity to understand the activity from their perspective. Initially, I had blindly followed some of the interventions and these had failed. The failure, however, also taught me some things. I could identify the critical things I had overlooked when planning an intervention with the community. I will conclude the article here with the note that the process of exploration and reflection has made me more confident as a practitioner now.

Dinesh Jaiswal is an Executive in PRADAN, and works in their Tokapal team in Bastar, Chhattisgarh. A B.Tech in Biotechnology from National Institution of Technology (NIT), Raipur, he joined PRADAN as a Development Apprentice and has been working in the tribal belt of Bastar for more than five years. His areas of interest are collectives, livelihoods and natural resource management, and has expertise in small livestock promotion.