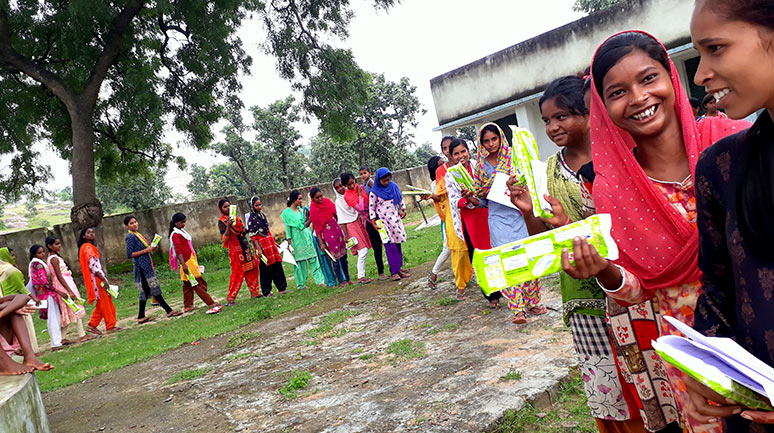 By letting go of the shame and secrecy that girls experience about having their period and by openly having discussions and understanding about why they have a period every month, the girls are sending a very powerful message, challenging their subjugation in society

Breaking the taboo around menstrual hygiene, the adolescent girls of six villages in Jhalda I block started a campaign called ‘Pad Abhiyaan’. They marched through their village with sanitary pads in their hands, unaffected by the men and boys watching them. “It is our blood; it is natural so why should we feel ashamed talking about it,” said Sonamuni, who participated in the campaign.

Some two years back (in 2018), Pratima, now in class IX, had her first period. Afraid that she had contracted some disease, she didn’t tell anyone. “I bled, in pain, for six days. I thought I had committed some sin. I did not go to school and because it was the paddy transplanting season, my mother, who was always in the field, did not notice. My first period went like that. Later, my school friends told me about it and asked me to use an old cloth during my period.”

“Here, it is like this…we get to know about periods from our friends. My mother never told me anything. She only told me to isolate myself from the family and asked me not to pray or touch any puja-related thing,” said Malati, a class VIII student.

Menstruation, a biological process and one of the important phases in the life of a girl, remains a blotch, a stigma, seldom spoken of openly in families. This is beginning to change in Jhalda I block of West Bengal’s Purulia district, where open discussions, knowledge and awareness around menstruation are slowly helping girls and their mothers to gracefully embrace their period.

I bled, in pain, for six days. I thought I had committed some sin. I did not go to school and because it was the paddy transplanting season, my mother, who was always in the field, did not notice. My first period went like that.”
Pratima, a class XI student

I n December last year, we had a discussion on early marriage and puberty with Federation leaders and Change Vectors in Jhalda. Change Vectors are women volunteers from SHGs, trained in different aspects of health and nutrition and who, in turn, create awareness and collective action around various issues such as healthy eating, dietary diversity, child care and hygienic practices in their own villages. During the discussions, the women said that once a girl attains menarche, or the first menstrual cycle, her family is afraid that the girl may get pregnant and bring shame to the family. Hence, people prefer to get their daughters married early (as per Federation members, girls usually get married between 16 and 17 years). Further discussions revealed that conversations around menstruation do not happen in families. Women find it very awkward to discuss issues such as menstruation and puberty with their daughters.

The training focused on what menstruation is, why it occurs and what are the physical changes that happen in the body during menstruation. Discussions on healthy eating, and health and hygiene were conducted through the use of case stories and other IEC material. Women realized that these discussions are very important and that all women, especially girls, should be encouraged to participate in these sessions. One of the leaders, Gayetri Mahato, said, “Although we are Federation leaders and trainers and we talk to so many people, we are so ignorant about menstruation, menstrual health and hygiene. We fully understand how the women and girls in our area, who know nothing about menstruation, suffer in silence.” At the end of the training session, the Federation leaders and the Change Vectors decided to jointly focus on adolescent girls and take serious and urgent action for their menstrual health and hygiene. 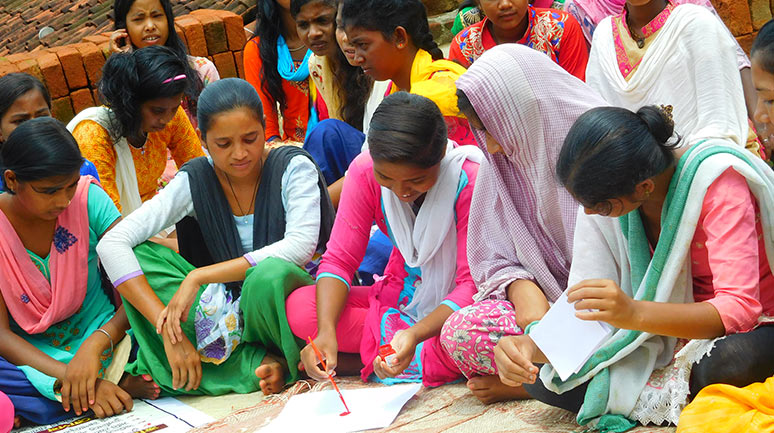 Understanding the Issues of Adolescent Girls

B efore initiating any action to address the issue, a study of the current scenario of adolescents in the operational area was very necessary. A survey of 187 adolescent girls (school-going and dropouts) was done by the Change Vectors, with the support of PRADAN. And six focused group discussions (FGDs) were conducted in six villages, namely, Putidih, Panri, Kuki, Chirutarh, Mohukudar and Nowagarh. Adolescent girls from various communities were approached to understand the challenges and issues regarding menstrual health. Some of the findings from the FGDs are:

Here, it is like this…we get to know about periods from our friends. My mother never told me anything. She only told me to isolate myself from the family and asked me not to pray or touch any puja-related thing, 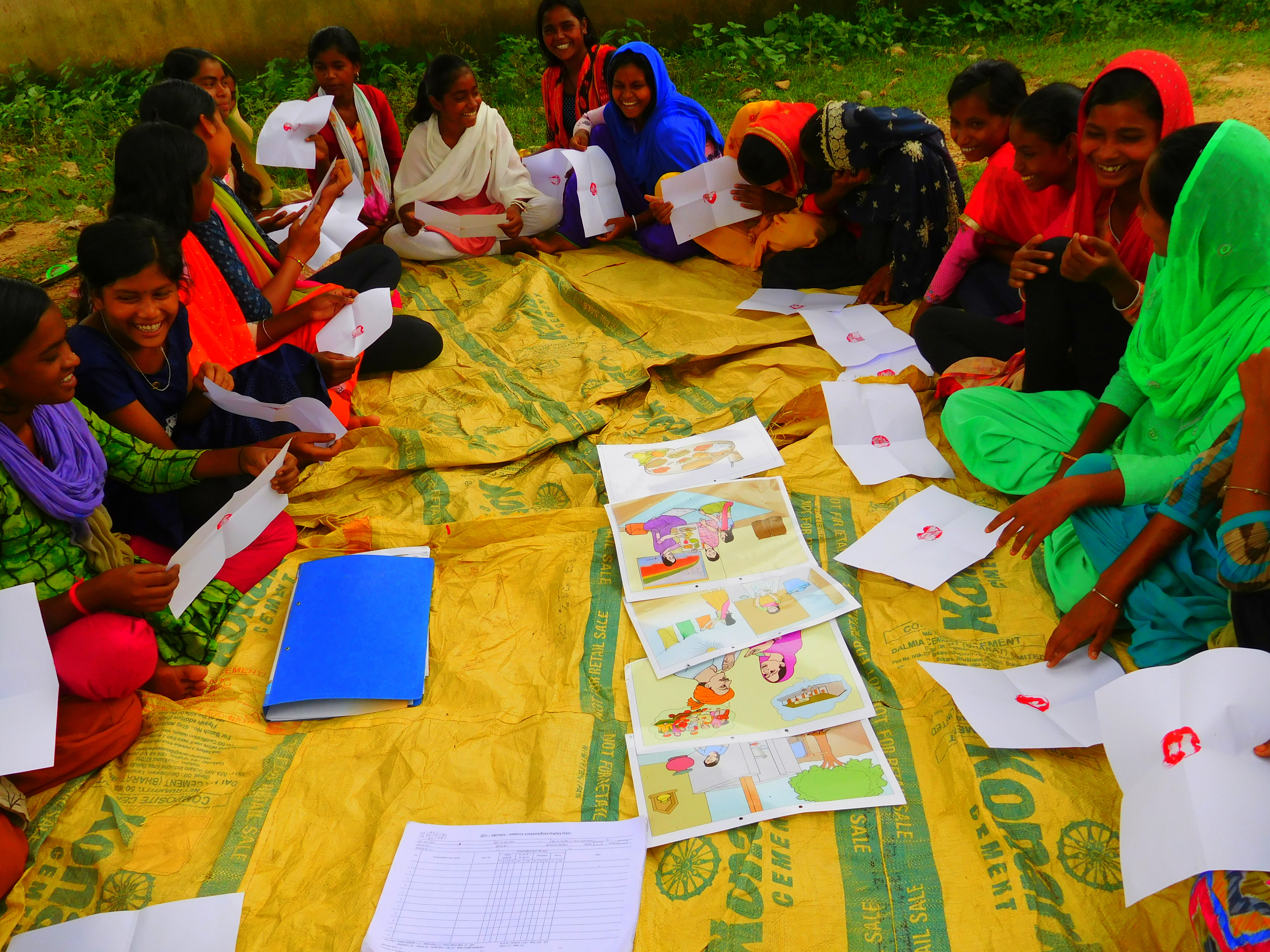 T he FGDs and the surveys reveal the need for open discussions on menstruation to break the stigma around it. For this, three levels of initiatives were taken. These were:

Open discussions between mothers and daughters: Open discussions help mothers and daughters to talk freely about their fears and challenges, and help understand each other’s points of view. The girls talked about the challenges and issues they faced whereas their mothers spoke about their fears that the girls may get pregnant if their movements are not controlled. There were discussions on how girls longed for their mother’s love and affection, guidance and support. The mothers, on the other hand, expressed the need for respect.

When we walked through the village, some boys and men started laughing at us. We were supported, however, by a Change Vector didi, who led the way. Initially, we felt shy; later, it didn’t bother us,”
Sabitri, a 14 year old girl

Training on menstruation: With the help of the Change Vectors, a training module was run for adolescent girls. Although it had been decided that the training would be conducted in the school by school teachers, this could not be done because of the lockdown. Village-level trainings on understanding the menstrual cycle, menstrual hygiene and a healthy diet were organized for the girls. Picture cards were used to show the story of 12-year-old Shila and her experience of menarche. The adolescent girls in the meeting discussed Shila’s story and, through this, enhanced their learning. “I never knew that it is so important to change the cloth during my period. From now on, I will wash and take a bath regularly during my period,” said Kabita, a 13-year-old girl. Mamata, age 14, said that she would eat green leafy vegetables and would take the IFA tablets regularly because she now understood how important it was for her health.

The girls were also shown how to use sanitary napkins. Because the disposal of sanitary napkins is a big issue, biodegradable Bloom sanitary pads were ordered from Kolkata on a trial basis. A small pilot was done to see if the pads are biodegradable and comfortable to use. “We dug a hole in the earth, put the soiled pad in it and marked the place. A month later, we checked if the pad had decomposed. Some pads had started getting decomposed. We had so much fun doing this activity. It was for the first time that we talked so freely about our period. We didn’t have any hesitation,” said Sumitra cheerfully.

Starting a campaign on menstruation: With the support of their mothers and the Change Vectors, the girls started a campaign called ‘Pad Abhiyan’. In the six villages, where FGDs were held, adolescent girls marched with pads (sanitary napkins) in their hands and raised slogans against menstrual stigma. “When we walked through the village, some boys and men started laughing at us. We were supported, however, by a Change Vector didi, who led the way. Initially, we felt shy; later, it didn’t bother us,” said Sabitri proudly after participating in the campaign. 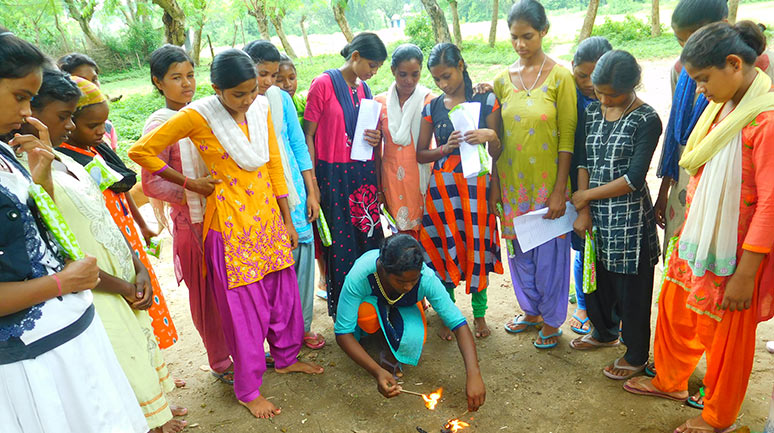 Witnessing a fire test being conducted by a girl in Chirutarh village, Jhalda -I block, West Bengal, to check if sanitary pads are biodegradable

F ederation leaders decided that awareness and training about menstruation need to be part of a Federation’s community action plan. The survey, as well as the FGDs, highlighted the need for the availability of low-cost, biodegradable sanitary pads. Currently, with the help of PRADAN, the leaders are contacting different organizations that provide low-cost napkins. They are also developing a business model, in which the Federation buys the sanitary pads in bulk, and these are made available, through the Change Vectors, at the village level. 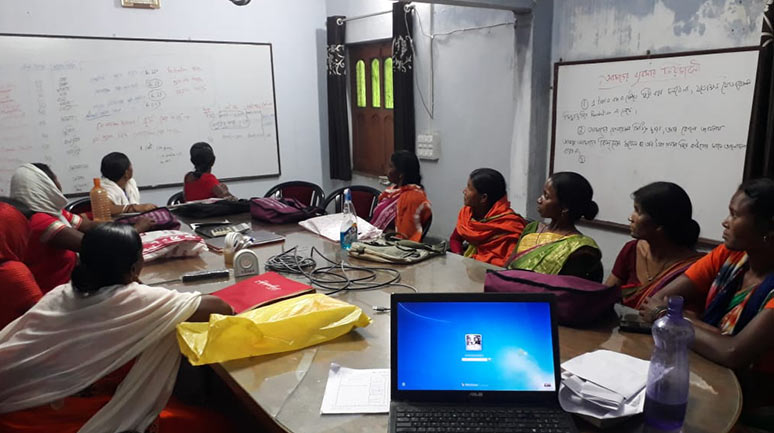 S tigma and taboos around menstruation are universal. In rural areas, the lack of awareness about menstruation and the lack of basic facilities such as healthy food, sanitary pads, toilets and health services further intensifies the problem. This has far more profound ramifications such as restricted movement, school dropouts and early marriage. The need is, therefore, to create awareness about menstruation, generate open discussions in schools and families, and provide a supportive environment to girls so that they do not feel ashamed about, but rather embrace, their period as a natural phenomenon and a part of the experience of growing up.

Annesa Sarkar, a consultant with PRADAN, is based in Jhalda-I block, West Bengal. She supports the Health and Nutrition initiative in PRADAN’s Jhalda team. She has worked as a Block Project Officer in Public Health Resource Socity (PHRS) earlier. She has a Master’s in Social Work from Visva Bharati University, Santiniketan, West Bengal, and also holds a PG Diploma in Human Rights. Her interest areas are Health and Nutrition, and Women and Child Health.