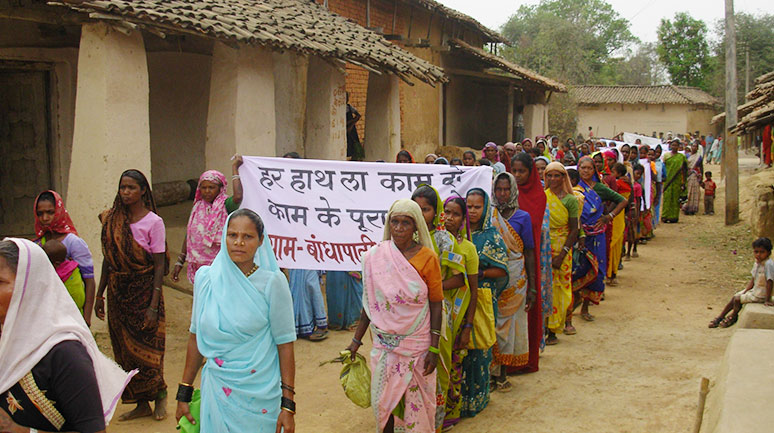 T HE MAHATMA GANDHI NATIONAL RURAL Employment Guarantee Act (MGNREGA) is considered to be the foundation for establishing local democracy. The Act itself is empowering for local governance and the provisions of the Act strongly promote power decentralization to panchayats and villages. The Act honours local knowledge and wisdom, and its operational structure is based on the principles of decentralized and participatory decision-making.

The provisions of decentralized planning and implementation processes embedded in MGNREGA have great power to establish the instruments of local governance and activate gram sabhas (GSs) and Panchayati Raj Institutions (PRIs). The true potential of decentralized operations in MGNREGA is yet to be realized in Jharkhand. The gram panchayats (GPs) in Jharkhand are relatively new but are gradually maturing. PRIs are also at a nascent stage.

The true potential of decentralized operations in MGNREGA is yet to be realized in Jharkhand. The gram panchayats (GPs) in Jharkhand are relatively new but are gradually maturing. PRIs are also at a nascent stage

MGNREGA’s operations at the grass roots are supposed to strengthen the local accountability structures and ensure transparent implementation on the ground. Whereas the Act itself is amply equipped with provisions for decentralized operations, this potential is yet to be fully realized.

The Vision of Decentralized Governance

The Cluster Facilitation Team (CFT) experience in Jharkhand can be seen as a practice and praxis-based study of the gradual realization of the envisioned strong rural decentralization and the strengthening of the local governance. The positive experiences of the CFT programme have shown a few glimpses, which have helped us understand how through strategic engagement with the community, the administration and the elected local representatives, normative influences can be ensured, which can lead to a change in culture of the rural governance eco-system.

The idea of strong local governance is incomplete without the idea of democratic decentralization, wherein people’s participation in planning, decision-making and monitoring has to be fully established.

Debmalaya Nandi coordinates the CFT project (PRADAN). He is based in Ranchi.Debmalaya has more than 10 years of experience and has worked in Jharkhand and Odisha.