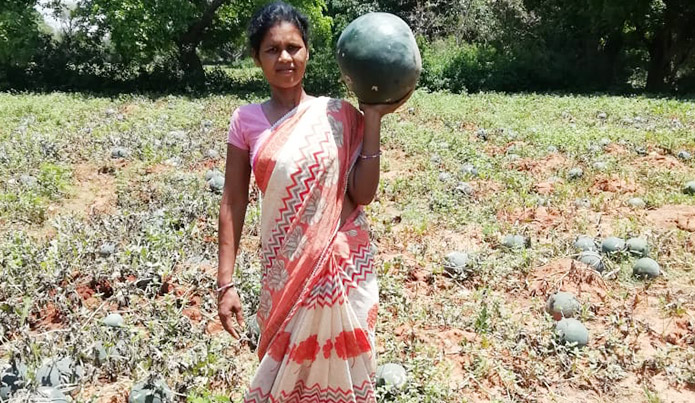 Just a few days before the lockdown, I went to Arhara village to check the watermelon crops. Sunita Barla didi who had cultivated the watermelon for the first time in her life could not stop grinning. She was very happy; her efforts were bearing fruit ‘literally’.

Last year village Arhara, a small tribal village in Kamdara block of Jharkhand, had installed solar irrigation with funds from Bank of America Merrill Lynch (BAML) and part contribution from the community. Sunita Barla had also contributed Rs 10,000 for the solar lift irrigation from the loan she has taken from her SHG. Simon Barla (Agriculture Entrepreneur) helped in providing all the technical support to her and other farmers from her village. All the farmers were linked to the Palkot Agro-horti cooperative for the input and output linkage. Everything was going as she had expected. She thought of repaying the loan taken for the solar lift from the sale of the watermelons. But with the announcement of the country-wide lockdown, all her hopes were dashed. With no vehicles plying and the markets closed, it became a desperate situation, if the fruits are not sold, she could incur huge losses.

In the meanwhile, we could appraise the situation to the district administration. Immediately two vehicle passes were issued to carry vegetables to the market area within the State. With the assurance of vehicle passes from the administration, Sunita Barla along with other farmers started harvesting the crops. A total of 9 MT of watermelons were harvested from the first fruiting including the 4MT from Sunita’s field. The farmers are expecting a total of 80MT from the watermelons. In the meantime, vendors from Ranchi, Jamshedpur, Rourkela and Ambikapur were explored and were asked for the quotations. Within three days of the release of the passes, all the watermelons were bought by the vendor from Jamshedpur @6.75perkg.

Sunita Barla didi is happy again and so are the farmers from the village Arhara and so am I. This success in Arhara has brought a ray of hope in these desperate times for the farmers in Kamdara as well as adjoining blocks of Basia and Palkot.