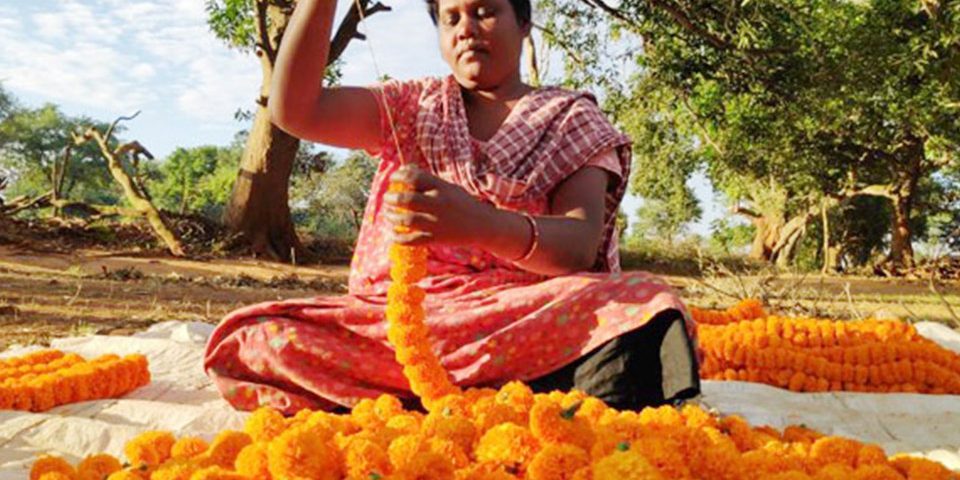 Despite carrying out many farming activities, women lacked recognition. Coming together as a self-help group, they have found confidence to progress and use collective bargaining power to their advantage 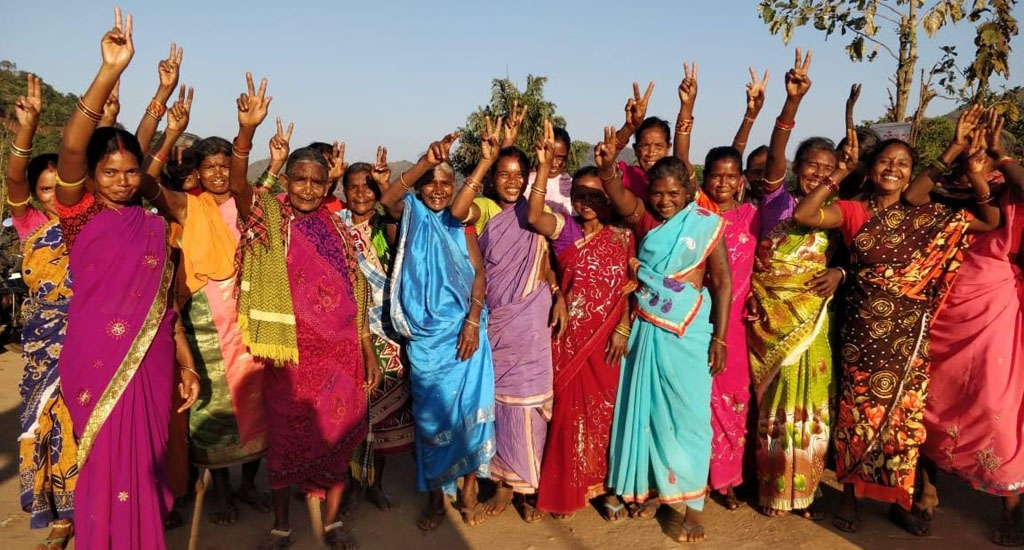 Forming a producer company has been possible for women farmers, seen here rejoicing after the formation of the company, by coming together (Photo by Nikita Saikia)

“This is the recognition of our hard work, of establishing our identity as farmers. This is the time to celebrate,” said Moina Krishani. “We have come a long way. We will go a long way.”

Moina Krishani could not control her emotions as she received the news of their farmer producer company (FPC) becoming the first women producer company to be registered in Koraput, a tribal dominated district in southern Odisha.

The Koraput Nari Sakti Farmer Producer Company got registered under the Companies Act, 2013 on 23 July, 2020. “I feel happy that our company has been registered as Nari Shakti, the strength of the women,” said Moni Khillo, a board member. “The name itself will let everyone know that it is a company run by women.”

This is no mean feat for women who were reluctant to come out of their house about 10 years ago. Realizing the strength of being together, the women congregated into village level organizations, and then into federations, reaching out to more than 25,000 women in Koraput district.

“The women toil in the fields which they cannot call their own. After a long day’s work in the field, they would cook and do household chores, only to eat the leftover,” said Laxmi Sisa, during a program on the role of women in farming.

Compared to men, women spend more time on the field, raising nursery, transplanting, weeding, harvesting, sorting, storing, etc. Yet the women find themselves left behind as they do not hold land in their name, do not have any decision making power, and they have very little exposure to the market.

With non-exposure to the outside world, women have been fearful of stepping out and shy to share their views. The control remains with the men who procure seeds and fertilizers, and sell the produce. There were a multitude of issues.

Capacity buildingWhen Professional Assistance for Development Action (PRADAN) started working in the area, the initial step was to mobilize the women into forming self-help groups. The regular meetings and training made the women confident. The women organizations became the pillar of support to each other. 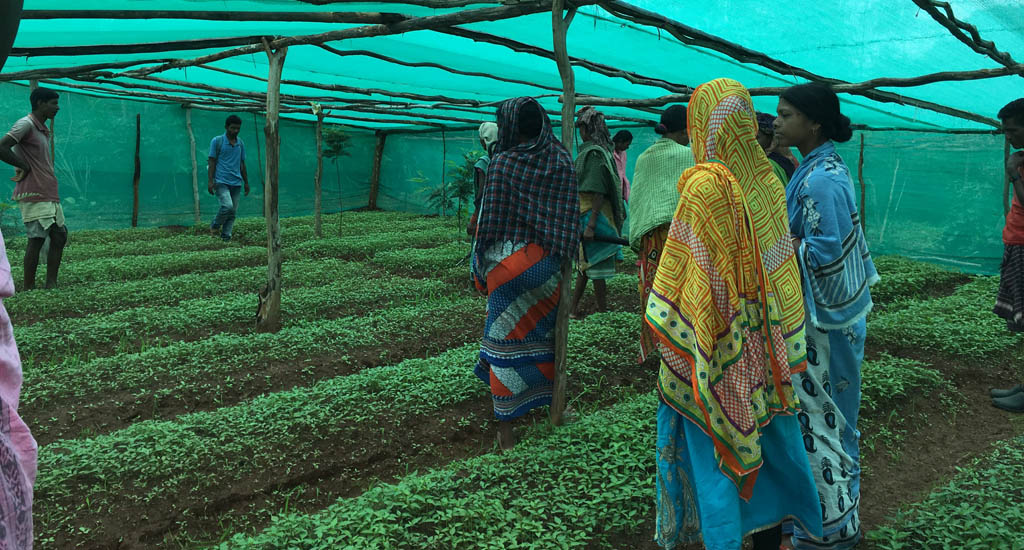 Capacity building Women farmers visiting a chilly nursery, as part of improving their farm practices as a producer group (Photo by Nikita Saikia)

“Earlier we used to produce only paddy or millet. But now we grow vegetables and pulses along with paddy and millets. We know different methods of cultivating such as the SRI method in paddy, SMI method in millet and trellis method for creepers,” said Krishani.

“We know about plant diseases and the treatment methods. We know how to prepare different compost and how to use it,” she said. “Men have now started respecting us and in many households women are joint decision makers.”

With women coming to the fore, issues such as farm drudgery, quality of seeds and fertilizers, soil deterioration, crops for household consumption, etc. were discussed in different forums. Women who were engaged in every stage of farming knew the nitty gritty, and could exactly identify problems related to agriculture.

Unlike men, women work collectively, whether it is in their self-help group (SHG) to take loan from the bank or to do transplanting in a patch of land. It was easier to convince the women to work collectively to solve the problems that can help realize the economies of scale.

Each SHG does a household level planning to understand what crop the household would grow, in how much land, the requirement of seeds, fertilizers and other inputs. Along with the crop planning, women also plan the kind of farm mechanization implements needed in their SHG.

This plan from all the SHGs is consolidated at the village level and then at the block level federation. At the block level all the plans are tabulated to check the overall demand for agriculture inputs. All the inputs are procured centrally at negotiated price and distributed as per the demand, thus significantly reducing the input costs. Similarly, the training calendar is developed based on the crop planning developed by the SHGs.

As all the activities require coordination, a strong bookkeeping system ensures transparency at each level. “Since many of us are not educated, we have engaged trained book-keepers. We make it a point that the records of each meeting are entered in the book and the minutes are read out. These books are also regularly audited,” said Tulsa Adari, an FPC board member. 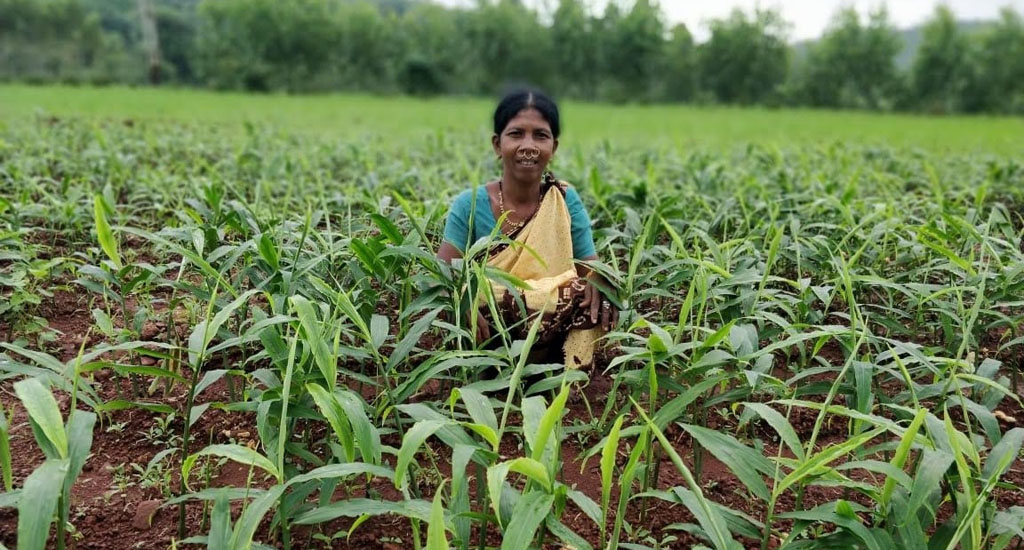 “We then slowly started marketing cash crops such as chilly. We realized that marketing collectively not only helps in negotiating better prices but also saves time and energy,” said Krishani. Women farmers were then mobilized into producer groups, each group having a membership of around 150 women farmers from about five villages.

The formation of a producer group led to synchronized crop planning. A study of nearby wholesale mandis and markets was done to assess the demand of the crops in different markets. Based on the study, a few crops were identified by the producer groups, so that the women could cultivate and sell collectively.

When the transactions increased, the group had to be registered as an FPC. Awareness training was conducted for the farmers about FPC, its legalities, selection of board members and their roles and responsibilities. This was followed by visioning exercises at all levels.

Subsequently, 10 members from Lamtaput and Nandpur administrative blocks were selected and are now the FPC’s directors. Walmart Foundation’s LEAP project also supports the Nari Shakti FPC in strengthening its capacity to gainfully engage with the market and provide necessary support to its members.

“We currently have 350 women farmers as shareholders and generated Rs 350,000 in five months of the FPC formation. Currently, the FPC has decided to farm millets in the food crop category, chilly, ginger and beans in the cash crop category and backyard poultry and goat in the livestock category,” said Mahima Khillo, one of the board members.

While this journey of women farmers coming together to farm and to running an FPC is inspiring, it is important to understand that such development also requires to build an ecosystem for sustainable change.

Developing an ecosystem requires resources, skill and capacity building, infrastructure development and pro-poor policies to build a positive spiral of growth. A synergistic coalition of government, donors and civil society with each playing their distinctive role in tandem is crucial to bring long-lasting change.