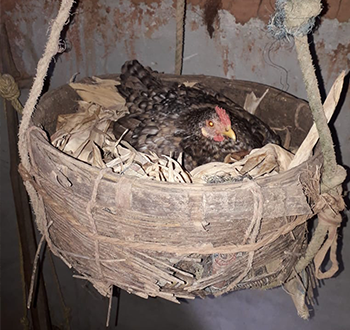 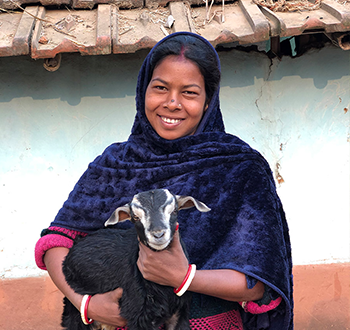 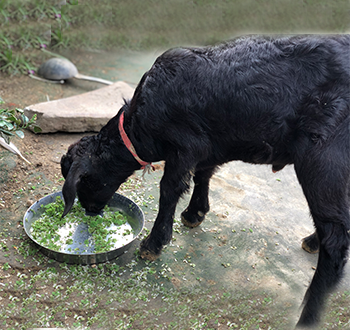 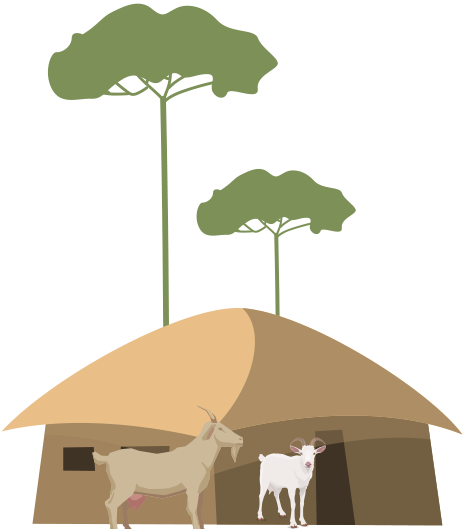 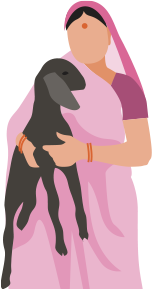 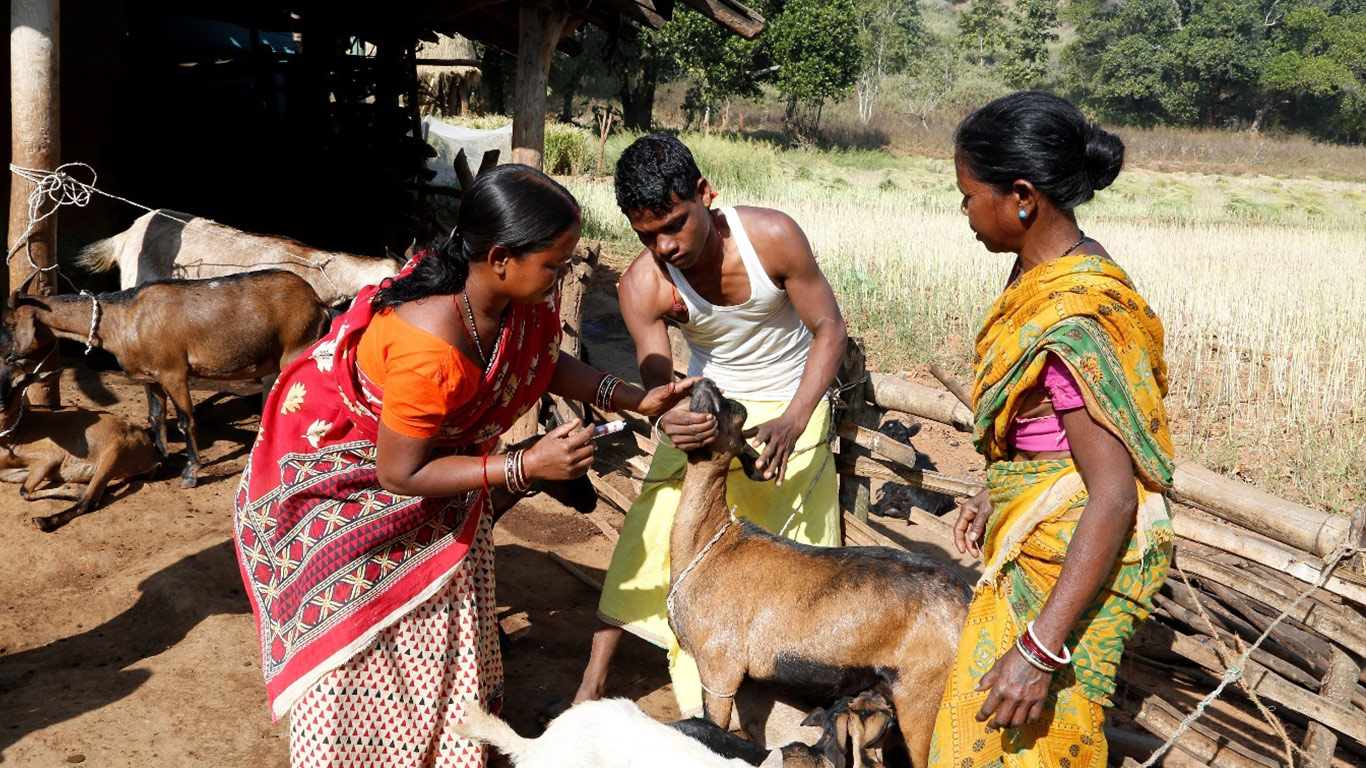 We are happy to announce our partnership project with ICICI Foundation, named Assured Income Enhancement Model Goat and Back Yard Poultry (BYP) Farming in Simdega, Godda and Dumka Districts, Jharkhand. This four-year project aspires to enhance capabilities of 8,000 poor rearers (Goat and BYP) in the districts of Simdega, Godda and Dumka in the state of Jharkhand, to ensure additional annual income of Rs 30,000/- per rearer (from current average income of Rs 5,000/-). Rearers would be collectivized into 150 Producer Groups (PGs) in 150 villages and PGs would be federated into three Block level Producers’ Collective (BPC) in three Blocks to support and sustain their rearing business.

We are happy to announce our partnership project with ICICI Foundation, named Assured Income Enhancement Model Goat and Back Yard Poultry (BYP) Farming in Simdega, Godda and Dumka Districts, Jharkhand. This four-year project aspires to enhance capabilities of 8,000 poor rearers (Goat and BYP) in the districts of Simdega, Godda and Dumka in the state of Jharkhand, to ensure additional annual income of Rs 30,000/- per rearer (from current average income of Rs 5,000/-). Rearers would be collectivized into 150 Producer Groups (PGs) in 150 villages and PGs would be federated into three Block level Producers’ Collective (BPC) in three Blocks to support and sustain their rearing business.

Why focus on livestock?

Livestock plays an important role in rural livelihood system especially for a large number of rural poor in South Chhotanagpur and Santhal Pargana in Jharkhand. It contributes around 30% of the households’ income and about 85% of livestock are owned by the landless, small and marginal farmers. Generally, the poorer and vulnerable families use cattle for agriculture purpose, and small ruminants and fowls are used as buffer and coping mechanism during financial crisis in the family. In addition, it is also a major source of protein for the rural households.

What would the project achieve?

The project aims to address the issues like unstable income of the rural poor from an indigenous activity with proper service delivery model, technology adoption and better market linkages. Some of the major outcomes are:

Announcing the project, Mr. Narendranath Damodaran, Executive Director of PRADAN mentioned “If village-level animal health workers can provide critical services to both goats and backyard poultry, these services can become financially self-sustainable. This model of intervention, supported by the ICICI Foundation for Inclusive Growth, will help families to use small ruminants to meet their needs of animal protein, emergency cash needs and support them in increasing the stock of goats to attain business volumes”.

ICICI FOUNDATION FOR INCLUSIVE GROWTH is the CSR arm of ICICI Group. ICICI Foundation works on promoting Inclusive Growth across the country. It focusses on developing/strengthening value chains as a part of its Rural Livelihood program. ICICI foundation promotes inclusive growth through focused and holistic initiatives in identified areas. These are designed to help in building self-sustaining ecosystems in rural India and creating a lasting value by promoting collaborative efforts amongst community members. The program works on enabling sustainable livelihood at around 1,000 plus villages across the country with more than 300,000 beneficiaries till date. ICICI Academy for Skills imparts Skill development training to the underprivileged youth for employment opportunities. Over 155,000 youth have been trained at the 28 academies across the country. ICICI Foundation also manages the Rural Self Employment Training Institutes that provide self-employment oriented training to the rural youth. The RSETIs at Udaipur and Jodhpur have trained over 108,000 people. Overall, ICICI Foundation has trained and enabled sustainable livelihood for over 566,000 people. Promoting sustainable use of natural resources, nature and wildlife conservation are integrated in the programs of ICICI Foundation.

To know more about ICICI Foundation for Inclusive Growth you could visit at www.icicifoundation.org

To Change the world, you need to change yourself: Pano Tudu

Change begins at the end of your comfort zone, portraits Pano Tudu! A woman who was terrified by the thought of meeting anyone new but familiar is now heading to begin a journey of life which enhances every individual’s livelihood and in making her villages a blue print module for development.

Pano Tudu, is a 47-year-old homemaker hailing from the village of Karan Pura, Kathikund district, Jharkhand narrates her dry livelihood which once upon a time didn’t even address the basic needs of her family, which comprised a husband and 3 children. Pano and her husband used to completely depend on agriculture of their family land, where earning half a lakh annually was almost impossible for them. As the years passed by, they found that the financial gaps need to be filled to lead a happy & smooth life ahead. That’s when Pano came in contact with PRADAN as a SHG member, where she was introduced with financial saving and the timely use of money through monthly meetings. Being an active member of the SHG group, she happened to involve in various trainings given by PRADAN. And one among which, she was so fascinated and hope driven is the livestock training, which guaranteed a stable income and decent life to her now.

Few months down the line, she was elected as Pashu sakhi with periodical trainings and meetings of PRADAN. During these trainings, she was given exposure on how to maintain the livestock healthy and disease resistant with frequent deworming, vaccinations and nutritional supplies. She was also very much driven by the idea of how minimal care and vigilant maintenance of livestock could do wonders with one’s financial situation.

Sharing her experience with livestock rearing, “Before PRADAN, I used to have bare minimum of livestock with one cow, two hens and one goat, where they never came to survive long with which we could never able to depend on them for any financial assistance. There were times, almost 50-60 Hens and chicks used to die combined in a year because of seasonal diseases. But me being trained as pashu sakhi changed this course, where I now know in which season which animal need to be taken care of and at what time. With which from last three years, I am able to maintain two cows, two oxen, six ducks, 10 goats and 20 hens raising an exponential income of one lakh annually combined from both livestock and agriculture. Now hardly 2-4 chicks die in a year, where the reason being the wild boars and not because of any disease.”

“When my journey as Pashu sakhi started with one village, it was terribly challenging for me. Not knowing a fluent Hindi, being made fun by family & villagers, I used to walk 6-8 kms sometimes to give training on livestock in the neighborhood village. There was always a constant fear on how a person like me who never went outside my village, could able to deliver awareness on livestock rearing to people, who are completely strangers to me. But the zeal to change my livelihood while doing others, brought me out of my comfort zone and made me a Master Trainer not just for one but for 12 villages now. In which, I was able to form 9 samithi’s (Groups) where in each Samithi there are 20-25 members. Not just that, when a meeting is conducted, it was attended by at least 45- 50 people in the village”

Recollecting the early days of Pashu saki, she shared “I felt very difficult in organizing meetings and bringing all the women on the board to understand the significance of livestock rearing. They neither believed in vaccination nor in the income they can generate from livestock. That’s when I remember my trainings from PRADAN, where we were made to analyze if given a proper care & hygiene, we can able to earn almost Rs.9000/ year from a single hen alone. I tried breaking down the financial aspects to the women that if maintained 5-6 hens, there would be a fair amount of 50k earned with a smaller number of working hours. And this is most unlikely of them, who generally migrate to Kolkata for working 12 hours a day and earn no decent money.”

Ensuring they calculate each of the livestock income they could able to earn, she backed that they can believe in the system placed by PRADAN, where none of their livestock would be at risk and given a timely checkup. This led to a trust filled mechanism of more women joining in the SHG to get trained in livestock rearing, where sometimes there were also cases women from outside the group used to attend and follow the vaccination precautions for their livestock. “From not attending the meetings to becoming the village volunteers in organizing meetings and inviting me for the trainings, is somewhere I felt I grew in convincing and motivating more women in the village.”

PRADAN as a lantern stood for my entire family

“Having no personal vehicle at home, I used to walk or take lifts in reaching villages for training. This made people talk about me in a wrong way, which reached my husband ears, where he didn’t encourage me in the beginning. But with the continuous efforts of my work led to a respectful recognition from the people, who spoke about me earlier . This made my husband change his perception about my work. And now not only he persuades but personally drops me at the villages on his bike.”

Pano mentioned there is a swift change in her life after joining PRADAN, where she was able to transform her house into pucca, bought a bike, increased income by being PRADAN trainer, livestock rarer and a farmer. Not relaxing there, she was able to bring in a job for her husband at Fisheries department of district with her networking skills. And was able to motivate and created an opportunity for her son to attend trainings and join PRADAN. So she stood as this catalyst in not only empowering herself but the whole family with the support of PRADAN!

Proudly mentioning her growth over these years in PRADAN, she shared “my vision is to take up more villages other than the 12 which I am already working on and empower more women financially and socially, so that they could earn up to 50-60k per year through their livestock rearing”.

Pano Tudu stands as a best example of ‘empower a woman and a whole community would thrive!” 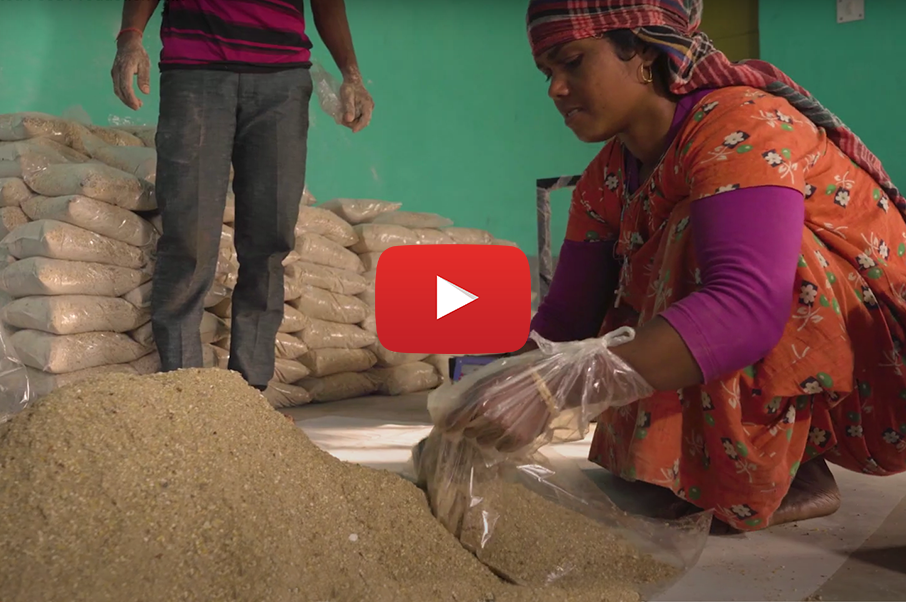 Backyard Poultry Rearing: A new dawn in the lives of the poorest families 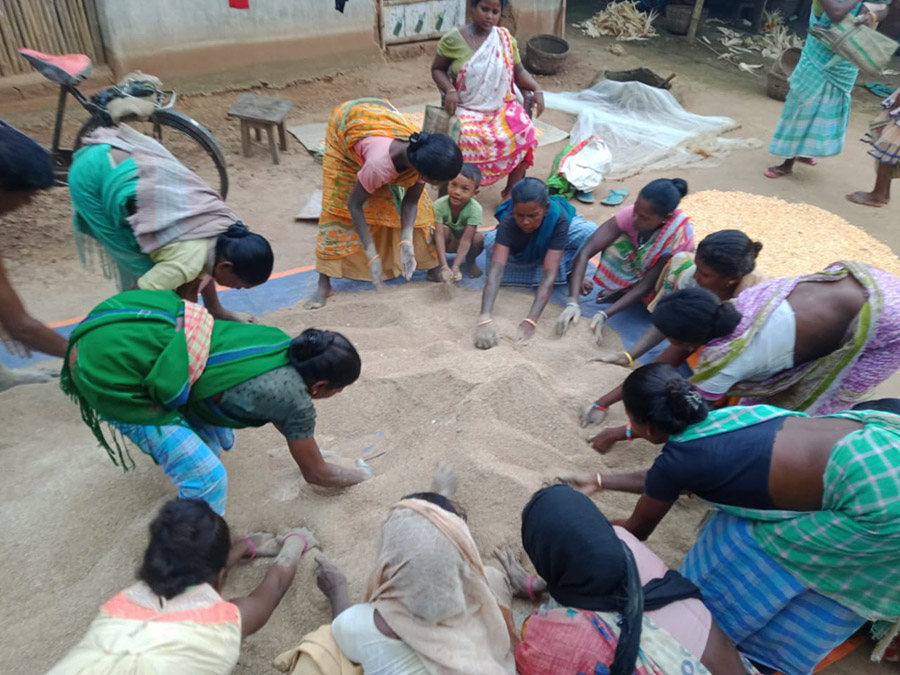 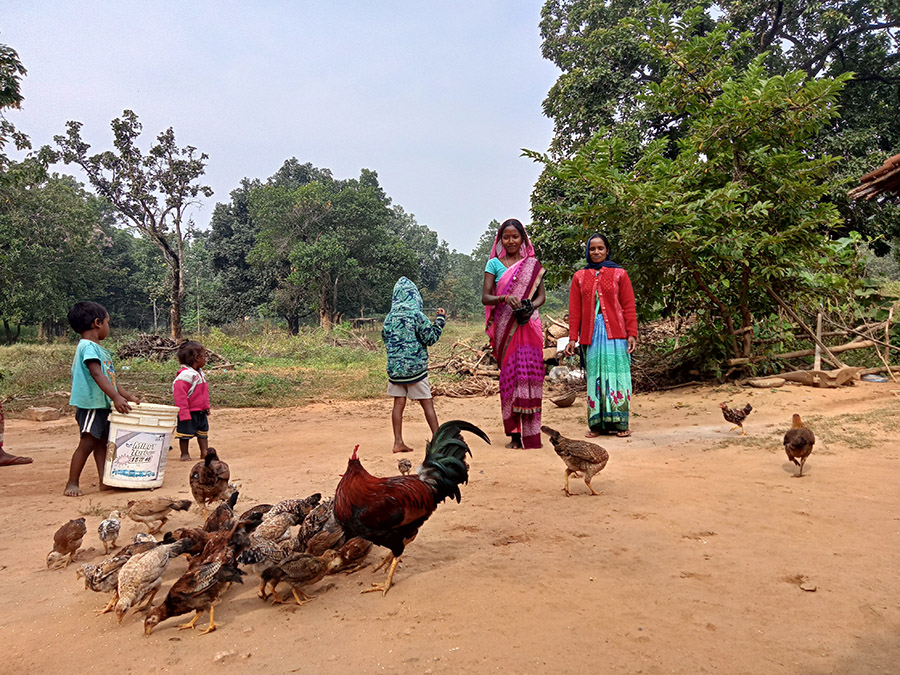 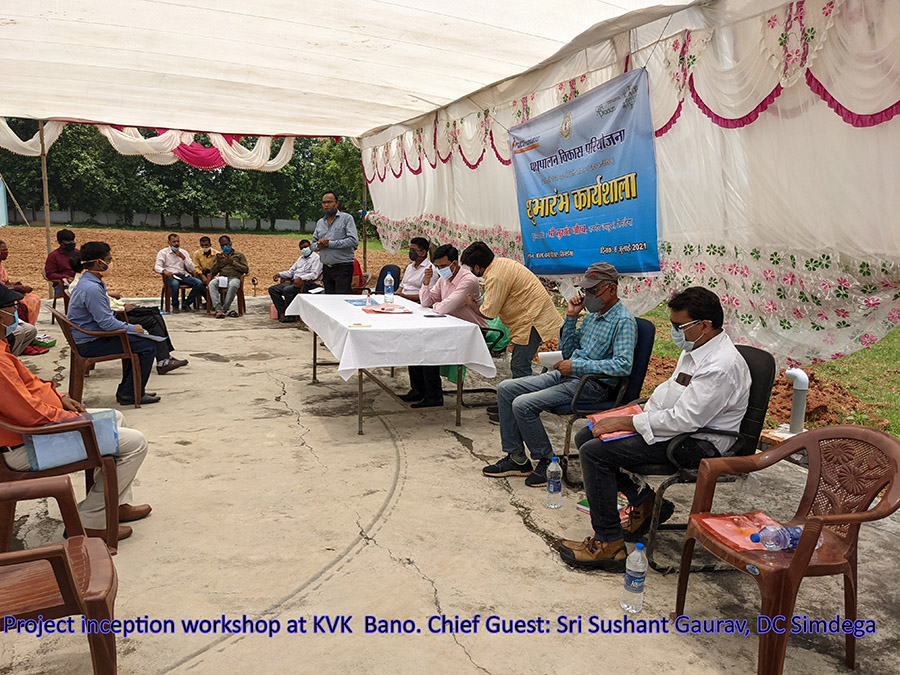 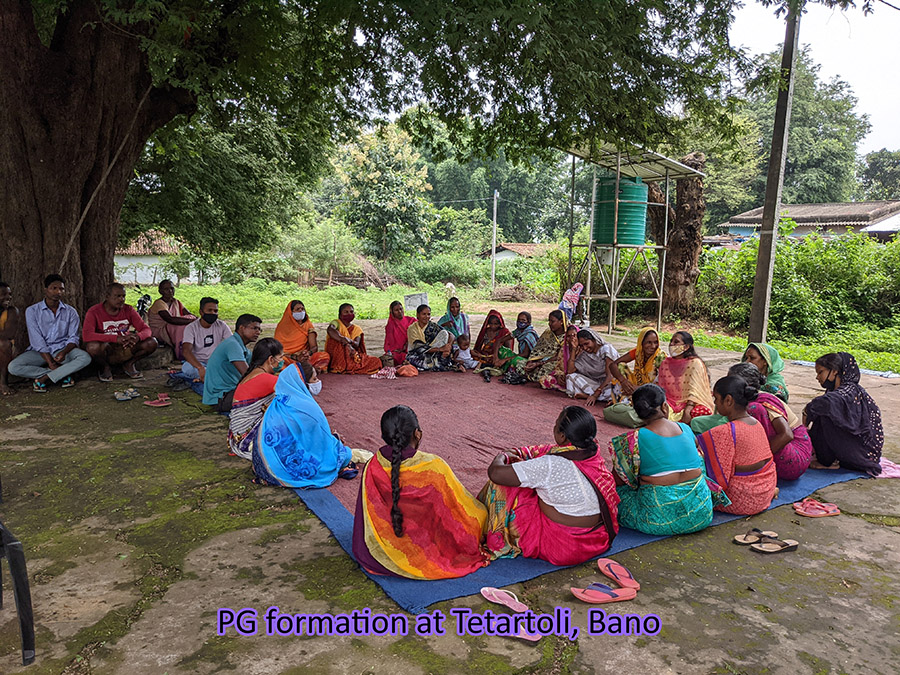 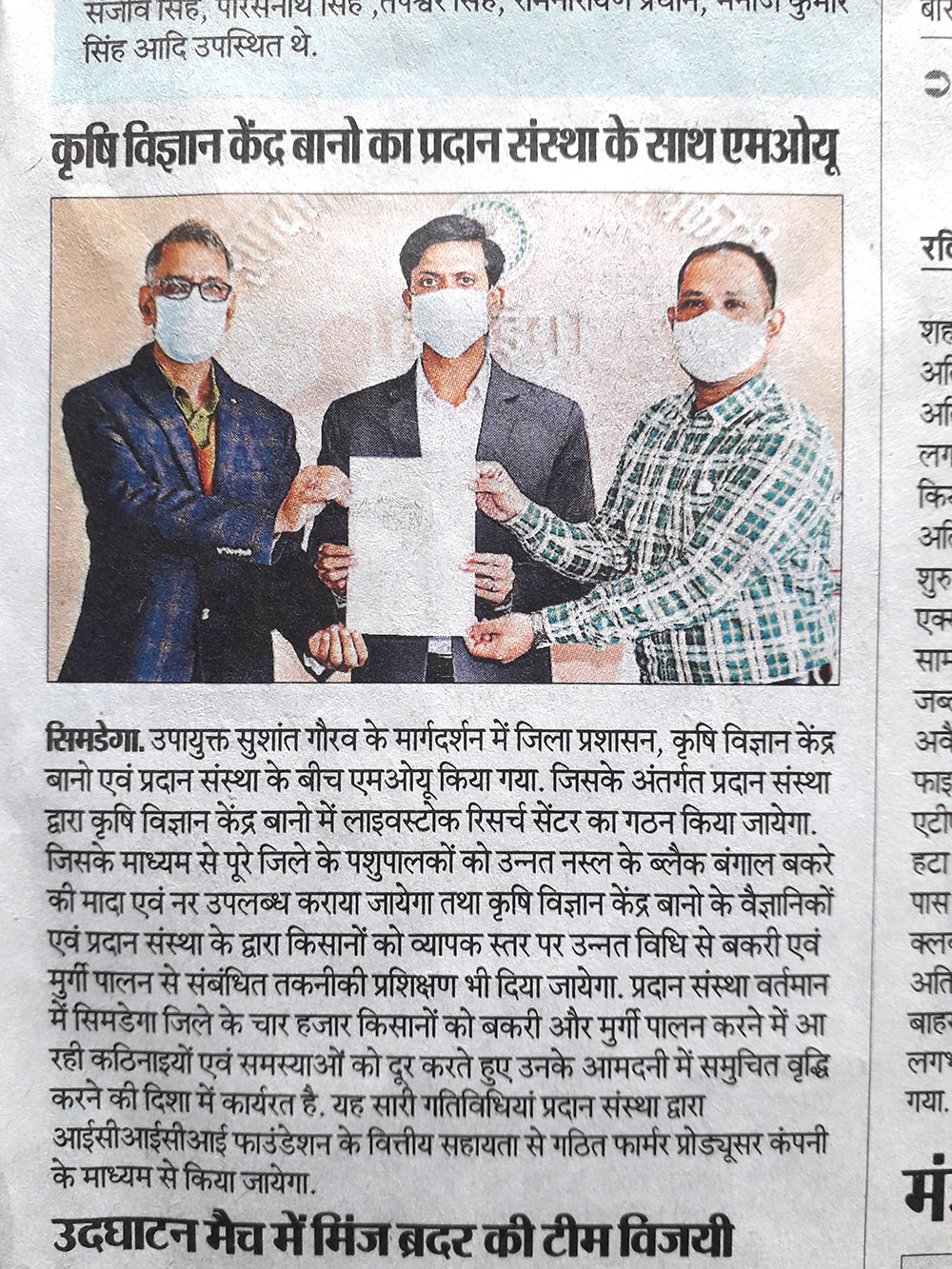