With Sickle and Stick, they Saved a Forest
by Souparno Chatterjee 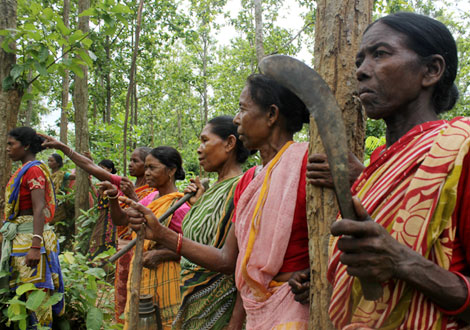 It was getting dark in the forest. At a distance, light was gleaming from oil lamps in the village. 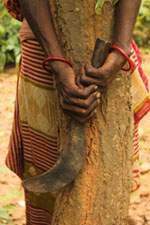 “Did you breastfeed these Saal trees? Why are you stopping us from cutting them down?” growled the poachers.

“How can you breastfeed your own mother?” retorted the resolute women.

Culturally, forests have played a vital role in the lives of the Santhal tribes. This is much more evident in villages that live on the fringes of forests. It is a relationship built on reverence and compassion. Forest provides the tribes with fuel wood, leaves, herbs, fruits and honey. It is also the abode of many Gods and Goddesses. In fact, Santhals are proudly the forest people. Hakimsinan village in Bankura is an embodiment of this relationship of tribal communities with forest.

When PRADAN professionals started working with the Santhal tribes of Hakimsinan village some years back, it was their first close interaction with outsiders. Interestingly, no one in this village had ever been to a bank: let alone have a bank account. A saving and credit group was formed which helped the families save money periodically and supported them for their credit needs. But this is not a story of financial sustainability- it is a story of transformation of women from this village into an unwavering collective which can stand for its rights and values they cherish. Even in the face of life threatening danger. 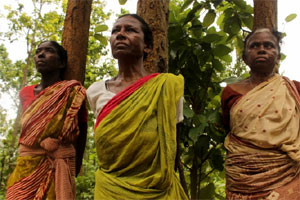 As PRADAN worked with this collective, it grew in strength and confidence. However, the real test of this collective strength came when unabated illegal logging of their forest threatened its very existence. The destruction of their culture and harmonious relationship with “Mother Nature” stared at them. Moved by this destruction, the charged collective decided to take a stand. But they were up against men with arms and influence. All they had was mere sickle and stick and an insurmountable belief in their own collective strength.

When the women in one of their group meetings announced that they would now take turns to guard the forest every night, the rest of the village was bewildered.

‘How can these frail women take on the might of the poachers?’ everyone wondered.

So, it began: the women grouped themselves and every night one group would vigil the forests. Simultaneously they lodged a complaint at the forest department.

The nights of skirmish: 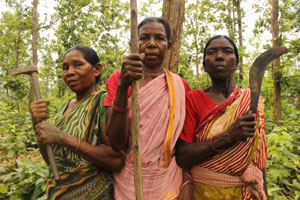 On a moonlit night, the group came face to face with the poachers. One woman ran back to the village. An altercation ensued. A knife was put to the throat of Lokkhimuni Soren, one of the group members. The mighty were ready to shed blood. In the meantime the rest of the women from the SHG dashed to the forest. This group of 15 women was not backing down. The poachers threatened to come back with greater force.

On another night of skirmish, the poachers growled, “Did you breastfeed these Saal trees? Why are you stopping us from cutting them down? Who are you to stop us?”

“How can you breastfeed your own mother? This forest is our mother and we will give our lives but will not let you cut the trees”, they retorted.

The poachers had to go back empty handed again. More skirmishes followed but they halted the devastation of their forest.

By now, the news of SHG women standing up to powerful poachers had spread all around. The women were also repeatedly engaging with the Forest Ranger. An official meeting was arranged between them and the forest officers. All poachers were subsequently arrested. Each one of them was fined Rs 5,000. Illegal logging of trees in the vicinity of Hakimsinan village and beyond has abated. There is still an undercurrent of threat to this collective from vested interests. But the women of this SHG are confident of taking on any challenge to save their forest: their Goddess, their Mother.