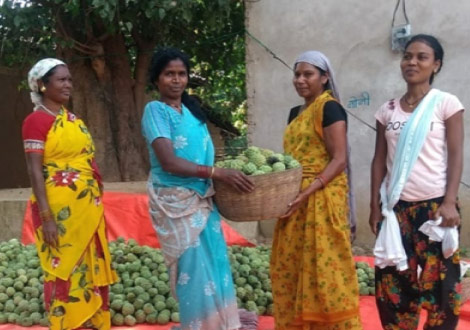 “Who goes to the SHG meetings to save ten or twenty rupees a week? We are now going to the meetings to plan for our next livelihood opportunity under Narua Gharua Ghuruwa Badi initiative of the Government of Chhattisgarh”

If we had asked Jalso the same thing, just two years back, she would not have said the same. Her SHG, composed of members of 12-13 women members from the local tribal communities, had practically stopped functioning. Low capital, irregularities in saving and loan repayment had been plaguing the group for quite some time. Gradually the members lost their interest in the proceedings of Jay Maa Bhagbati SHG.

But the members of Jay Maa Bhagwati SHG were living in great anxiety as the meetings stopped. There were four single women, in fact, one of the members were mentally unstable – they were perhaps more affected as the group got disbanded. The larger discomfiture led the group members share their situation in one of the village organization meetings. Someone suggested that PRADAN, an organization working in the same area, should conduct a vision building exercise to help these SHG members make a comeback plan. Likewise, PRADAN’s Narharpur team got involved. Rounds of deliberations took place and it was decided that if the group had to start functioning once more, then it’s best to take up an initiative with bare minimum working capital requirement. The group members looked a little bewildered – no solution was readily available. It was found that forest products are always found in abundance in Akhiharra, and custard apple is just one of them. The SHG members started procuring custard apple with Rs.10,000. In the next two months, the group members did a business of Rs. 1,45,000 with a total investment of Rs. 90,000! A net profit of Rs. 55,000, in 60 days. 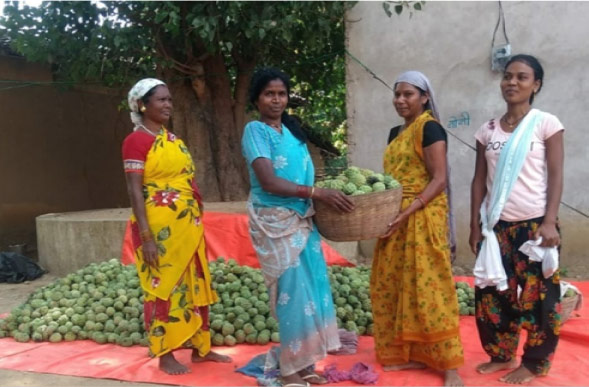 “Our days were long. We started procuring the custard apples at 6 in the morning, travel to Raipur or Bhilai, both more than 100 kms from our village, to sell the fruits, and come back to our village at 11 at night” said Savita bai one of the members of the SHG.

That was the beginning. Beginning of a phase to take up new ventures. Last year, in one of the Gram Sabha meetings, they took a 3400 sq. mtr pond on lease at a yearly rent of Rs. 5000. for ten years. Upon being asked what would they do with the pond – “we’ll rear fishes there” they responded. Since the activity was new to them, PRADAN supported them in procuring the fingerlings (baby-fishes) and help them learn all the steps and techniques involved in pisciculture. With full enthusiasm, Lachni, Savita and others started fish rearing with silver carp, common carp and also some miner carp like Rohu, Katla and Mrigal. They invested only Rs. 3500 to initiate the rearing! Not a single step mentioned in the training sessions were missed by the spirited women of Jay Maa Bhagabati SHG.

“We never thought that in this pandemic situation of COVID-19, an activity which was taken to help revive the group would feed our entire family.” – said Lachni Mandavi a member of Jai Maa Bhagwati SHG.

During the first harvest, 1.9 quintal of fish was caught. The group members were so excited to see the catch, that they decided to set aside 2 kgs for each of the participating families to taste the fishes! At the end of the first-year harvest, about 12 quintal fishes were caught with a bumper earning of Rupees one lakh twenty-five thousand! This year, the group has procured twice the quantity of fingerlings. 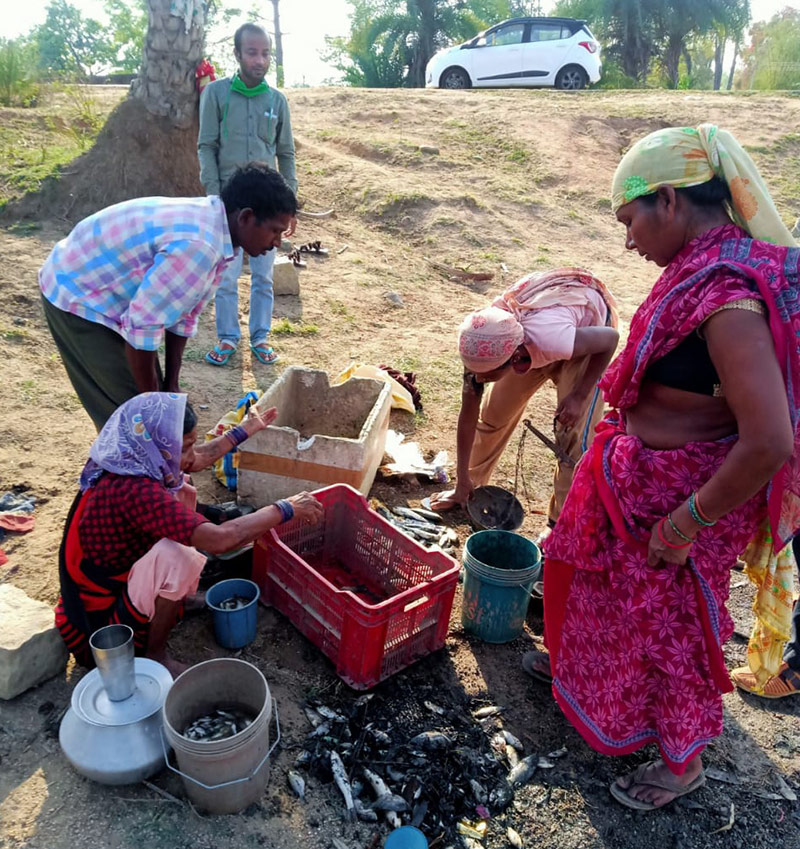 These new sets of activities garnered Rs. 15,000 additional income for each of the members Jay Maa Bhagbati SHG. But the actual gain for the members has been beyond financial profits – they regained the solidarity lost long ago. Savita, Jalso and Lachni came together to take up the responsibility of the daughter’s marriage of one of their group members who has been mentally unstable for several years.

As they say, happiness multiplies when shared with others. Jay Maa Bhagbati SHG members proved it true. Their taste of success did not remain confined to their members only. Being inspired by their triumph, this year three new SHGs got formed in the same area, named Jai Kisan SHG, Jai Maa Durga SHG and Jai Maa Bamleshwari SHG. Women from disadvantaged tribal groups saw a glaring example right in front of them, how lives of 12 women got transformed when they took the oath to come together and take up new initiatives that were never thought before. The horizon is widening and more and more opportunities are mushrooming in front of them. A long way to go.