The Rise of A ‘Fallen Woman’
Story & Photos by Souparno Chatterjee 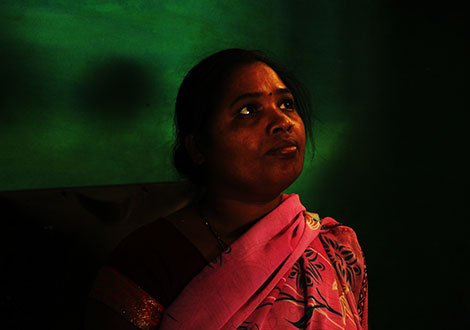 A 10ftx10ft room, with bright pink walls, one of the walls covered with shelves full of sarees and lingerie. This is the new shop that Ramiya Barse owns, this is the kingdom of her dreams. But just a few years ago, all she had was one saree – torn and dirty – as her sole possession. Her husband Dinesh, did not leave any scope for her to take any other belongings

Ramiya lost her place at her in-laws’ – she was brutally beaten up. The scars all over her back, arms, legs and face would heal with time. But her inner scars may never heal. Dinesh hurled abuses raising suspicion over Ramiya’s character once again. This time he hinted at the relationship she shared with her son. Each time he repeated the allegation, his blows grew in intensity. A turbulent relationship of eighteen years came to an end. The ground got stained with her blood. One of Ramiya’s friends found her semi-conscious that evening and carried her to her own home. Ramiya’s father came the next day with a bullock-cart. Ramiya left Shamnagar of Bhoura in Madhya Pradesh, foreveron a hot summer afternoon in 2012.

The next five years, Ramiya’s father, a retired coal mine worker, bore all expenses for Ramiya and her three children. Her mother’s care and comfort from her own brother, slowly helped her stand up on her own feet. Literally and metaphorically.

Ramiya had never shied away from work, or shouldering responsibilities. She used to earn her living as a labourer at the construction sites or farms. “Maine 18 saal apne pati, bachho aur saas-sasur ko paala kama kamake.” Ramiya, started working at construction sites once again. Although there was no compulsion as such, but somewhere deep inside guilt was brewing. A married daughter, with three children is always a ‘burden’ on an aging father.

The following spring, Ramiya got an invitation to a marriage at her sister’s place, just a couple of villages away. While participating in the marriage rituals, Ramiya got to know many women of that village, Jhalikheda. And one afternoon she saw some of them sitting in a circle beside the Anganwadi office. This was the first time that Ramiya saw an SHG meeting. Upon asking, she learnt that in the SHG meetings, with facilitation from professionals of PRADAN the members discuss their life issues and chalk out plans to resolve those. The SHGs were also platforms to promote savings and open avenues of livelihoods.  “Jhalikheda gaon ke Didion ko murgi paal ke kamate hue dekha toh maine socha PRADAN se bolke apne Dhapada gaon mein bhi samuh banaungi.” She had planned to stay there for two-months, and be a part of the euphoria. But stray comments at the bathing ghat and in the local market, forced her to cut her stay short. "Maine zindagi mein bohot kuch seh li, apne bete ke saath mera rishta ko le kar bhi gandi baat bola gaya. Mai aur jhelne ko raazi nahi thi."

Ramiya convinced her brother’s wife for mobilising women at Dhapada to form the first SHG of their village. They named it ‘Shri Ganesh Mahila Mandal’. This flagged off their journey of challenging many injustices and oppression that most of them had been subject to. It flagged off Ramiya’s journey to realise her own strengths. She decided to not only be part of the SHG agenda of accessing government entitlements or adopting farm innovations, but also pursue the idea of entrepreneurship which was sparked off by the PRADAN professional who helped Ramiya and her mates form their group. Every night, she would sleep less, but dream more. Of setting examples of what a "fallen woman" can achieve.

A local fair in October 2017 changed the game for Ramiya, forever. Her son, Ritesh, bought several items from a distant market and sold those in the fair, at a profit of Rs 5000! The idea of opening a grocery flashed in Ramiya's mind as she counted the money. "Hum aur paise kamayenge. Chal, Ritesh, ek kirana dukan kholte hain". Ritesh, bought soaps, biscuits, pulses, sugar, oil and rice – to start the venture. She shared the idea with others in her SHG. “Apne gaon me hai hi kya? Ek hi to timtimata hua dukan hai jisme bohot hi kam cheez milta hai.”; “Tum lagao dukan hum sab saath hain” cheered the members. This was more than enough for Ramiya to start realising her dream.

The small antechamber of their drawing room got converted into the grocery shop of Ramiya's dream. The next Raksha Bandhan she got some dress materials from a wholesale market in Itarsi and sold them at her shop. Her entire stock got sold out before the festival. She made good money from it and converted the drawing space also into a shop for dress-materials. Ramiya earned Rs. 60,000 over ten months by running these two shops - sufficient enough to take care of herself along with the children and the larger family.

Ramiya's septuagenarian mother’s eyes moisten as she talks of her daughter's achievements. But she repents that Ramiya’s father could not see what his daughter achieved within such a short span! He passed away in December 2017, just a week after Ramiya inaugurated her first shop. “No one would have been more proud than him, if he were alive today”, says her mother in a broken voice.