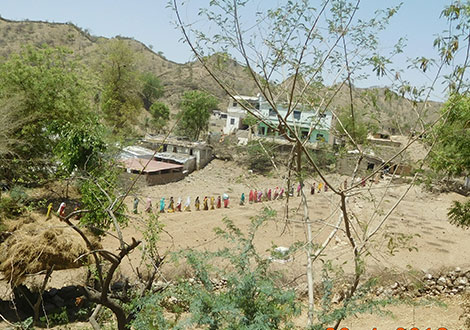 Have you ever been to Zawar area in Udaipur? Probably not. Situated a few kilometres from the highway connecting Udaipur to Ahmedabad, Zawar has a difficult and hilly terrain, sparsely dotted with village cottages. Men from these villages had never found it remunerative to stay in Zawar. To earn their livelihoods they had always migrated to the cities of Udaipur, Ahmedabad, and Rajasmand, leaving back their women at Zawar. If one would ask them what was their biggest concern – Zawar people would always say lack of access to the towns or cities had made life extremely difficult for them. The village has been extremely resource poor, and for every need of their daily life Zawar villagers were dependent on supplies from the cities. When the nationwide lockdown was announced in March, we can only guess how difficult life would have become for most of them who always depended on remittances to buy food and other items of daily need. In fact, the labour work on agriculture plots also stopped, that further deepened the crisis for inhabitants of Zawar. And those who were more vulnerable because of some illness in their families or just being aged – almost heard their death-knell when lockdown was announced. 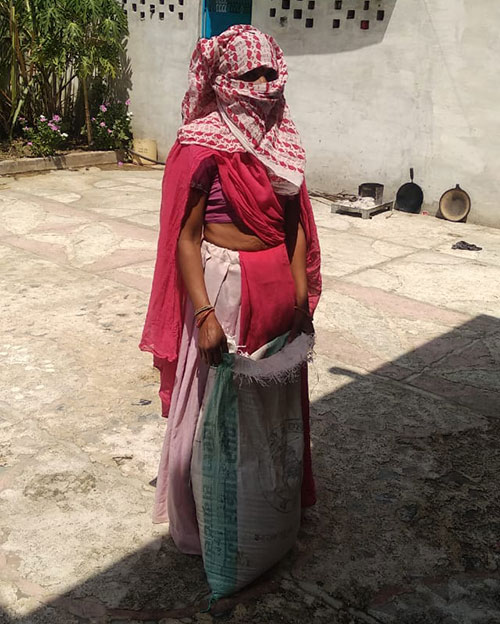 “This was the worst time we had ever faced. There was no income and the world seemed completely dark”, recollects Shanta Devi, a mother of three. Kalulal Meena, Shanta’s husband, had been very ill over the past few years. Wages from agriculture labour work is the only source of income for Shanta, to meet expenses of the family of five. She is also a member of Jai Jawar Mata Self Help Group (SHG) promoted by Manjari Foundation, where her SHG mates have always extended their support to Shanta. Lockdown came down heavily on Kalulal and Shanta. They soon ran out of grocery and other essential items. And in their village, Shanta’s was not the only family to feel the heat – there were several others in similar distress. And all these families were more vulnerable than the other Zawar families.

It was at this crucial juncture, that the power of women driven institutions was felt more strongly than ever. The local SHG members under their ‘Sakhi’ initiative came up with the idea of Sakhi Food Bank. The women members decided to collect food and essentials from each of the other households who still had some resources to share. With the collected items they opened food banks in Udaipur, Ajmer, Chittorgarh, Rajasmand, Bhilwara, and Dholpur districts of Rajasthan, and also in Udddham Singh Nagar of Uttrakhand. In financial institutions, the tellers do cash transactions – but here we have tellers who started transacting food items! The Sakhi members started identifying and engaging with extremely vulnerable families in these places and distributed food items. They also spread awareness on do’s and don’ts that one needed to strictly follow to avoid community transmission of the disease.

“It’s a small but a very meaningful contribution for all of us, this grain will help my family to cope with the overall crisis phase”, shared Durga, Nari Shakti SHG.

“This Coronavirus had put a dead stop to all farm-labour work. Somehow, with extreme precaution, we continued with our SHG meetings. In the mean time, one of our group members, Leela’s husband fell ill, and her family started facing food scarcity. Helping her out became our prime concern. All members of our group collected grains and gave it to Leela. After all, we had pledged not to let anyone go to bed, hungry”, Shankari Devi, Sakhi initiative member, Chandrawada village, Udaipur.

“We are amazed to see the contribution of Sakhi federations for helping some of the most vulnerable families and ensure no one sleeps hungry. Sakhi women acted as Corona warriors in these testing times, and we are nurturing the value of giving back to the society among such institutions that we helped promote.” Sanjay Sharma, Executive Director, Manjari Foundation.

“Sakhi SHG women have risen as strong community leaders and emerged as a strong support system since its inception. With the objective of ensuring “No One Sleeps Hungry”, in our project villages, our Sakhi federations, came up with the ‘food bank’ initiative. Sakhi members collected 10,000 Kgs of food grains in a noticeably short span of time, which is a big example of mutual support in the country during COVID-19 crises.” Vishal Agarwal, CSR Head, Hindustan Zinc Limited, Chittorgarh.

Sakhi is a women empowerment initiative implemented by Manjari Foundation (an organisation founded by Sanjay Sharma, ex-PRADANite) in partnership with Hindustan Zinc CSR, have a strong community connect with village communities and have mobilised more than 25,000 women across 174 villages in Ajmer, Bhilwara, Chittorgarh, Rajasmand and Udaipur districts of Rajasthan. Together, they have supported around 5,000 vulnerable families like that of Shanta and Kalulal and ensured that hunger and COVID-19 infection does not affect these families in some of the most difficult parts of the country.