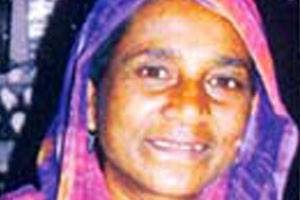 She took out loans amounting to Rs. 60,000 in order to set up a poultry farm in her backyard. The poultry farm has since been helping her family to earn more and meet their needs. But it is not only the enhanced incomes that her self-help group has assisted Savitribai. For her, one of the most positive changes in her life – and in that of her entire village – is that they have become independent of moneylenders. The old power equation has shifted and now women can directly access banks instead of being always at the mercy of the moneylenders.

Savitribai quickly earned the respect of the women in her community, eventually becoming one of the 450 leaders of the Narmada Mahila Sangh, a coalition of 300 self-help groups known for its charged presence in the community. Speaking of the impact of having an organised movement of women, Savitribai enthusiastically says, “Women now regularly participate in panchayat meetings, enjoy freedom of mobility, and share the household duties with their husbands.”