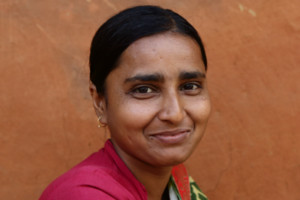 “Today I actively participate in the Theatre of the Oppressed. I visit remote villages across Purulia district in West Bengal, taking my story and other social messages to women and adolescent girls to give them hope, encouragement to raise their voices and to live a life with dignity. I pledge to make my daughter a confident and independent working woman. “

I was born to a family where sons and daughters were not considered equal, which is the norm rather than an exception in Indian society. I wanted to study but was married of early to a man who was severely diabetic and 12 years elder to me. Abuse -both emotional and physical, was a daily affair in the household. However, my husband died soon after my daughter was born, leaving me totally dependent on my in-laws and staring ahead into a dark future. Being a Muslim woman, one is strangled with several social and cultural restrictions especially in rural societies. My life was more stifling as I was a widow, a Muslim widow.

IT WAS A LIFE CHANGING EXPERIENCE

Looking back on my association with Pradan — it changed my life forever. One of my neighbours introduced me to a local Self Help Group (SHG) promoted by Pradan. The eighteen women members in my group gave me solace and support as most of them had similar problems. For the first
time ever; I had my own money, my own savings! I found purpose in life and was determined to live for my daughter.

I gathered courage and applied for a teaching position in the Adult Functional Literacy (AFL) programme of Pradan. As most women were illiterate they would say, “we are blind even though we have eyes”, but we all knew that it had to change. To my joy I was selected for the position of Facilitator. The AFL centres run in the evenings so that women could easily join, but I was not allowed to leave home after dark. My SHG co-members went to my in-laws and after much persuasion convinced them. They promised that they would escort me to the centre and drop me home after classes. Thus began my journey, but it was not my journey alone, it was the journey of 19 women and I was just a symbol!