Stepping Out Of The ‘Lakshman Rekha’
by Hemant Dewangan

“Keep your voice low, after all you are a girl. Girls are supposed to be soft-spoken.”

"Girls are meant to stay home and do household chores.”

“No more studies for you. It’s time to help your mother in the kitchen and look after your siblings.”

These age-old beliefs are still prevalent in large sections of the society. After a certain age, young girls are expected to do household work and be a mother to their younger siblings. Something rarely applicable to boys that age. Well, this is exactly what happened to Om Bai Patel.

Born in an OBC family, Om Bai grew up in a remote village named Belargaon in Chhattisgarh. Despite the fact that educating a girl wasn’t encouraged, Om Bai studied till class VIII. Perhaps this happened because her father was the school headmaster. Ironically, even though her father was the school headmaster, she had to give up her education mid-way so that her siblings could study.

Without a grudge, Om Bai became her mother’s helping hand. She was married off in good time and settled down with her new family in Kishanpuri village in the Narharpur block. Apart from taking care of her home and children, Om Bai worked hard in the fields too. Her life was limited to home and the fields.

Never part of any decision making at home, on 13th August, 2014 Om Bai took a life changing decision. She decided to become a member of Maa Santoshi, a Self-help Group promoted and nurtured by the National Rural Livelihoods Mission (NRLM) and supported by PRADAN through vision building and management related trainings. Om Bai benefitted by participating in various livelihood, Integrated Natural Resources Management (INRM) and gender trainings. Though quiet, shy and soft-spoken, a PRADAN professional identified her quick learning skills, hard work and sincerity. Encouraged to become a change agent to train others in the village, she was initially apprehensive and under-confident, but thanks to the support of the PRADAN professional and her husband, she agreed to take it up.

Om Bai received several training of Trainers’ sessions on agriculture and improved agricultural practices. The real challenge came not in training other SHG members, but in convincing her own family to try new farming techniques.

After much persuasion, her husband agreed to try System of Rice Intensification(SRI) in paddy cultivation on a small piece of their land. Unfortunately, due to the drought in 2014, the crop failed and the family turned against the new farming techniques.

Om Bai knew that it wasn’t going to be easy to convince her family again.

“No way am I going to use the SRI technique of farming,” said Om Bai’s adamant husband. “Last year we did not get a single grain of rice.”

Om Bai was adamant in her own way! She joined hands with 20 other families and tried the SRI method on 20 acres of the community’s land, out of which 1.4 acres were her own. Om Bai harvested 3.08 tonnes of paddy. This time the effort paid off. By 2018, she had earned Rs. 60,000 from paddy cultivation! Her happiness was unbounded.

Om Bai now turned her attention to goat rearing, the other major source of income for her family. They mostly earned Rs 15,000 – 20,000 annually from it. A couple of years ago, two goats died due to a sudden outbreak of goat pox and the family faced huge losses. Such situations are common in villages due to lack of knowledge. Om Bai shared about this loss with PRADAN professionals. Under their guidance, she brought her training on goat rearing to good use and applied the best practices possible. She took a loan to make a goat shed, vaccinated the goats and even purchased two mother goats. The efforts paid off again! And Om Bai earned Rs. 80,000 from goat rearing. This time the happiness of her family was unbounded!

The villagers were also amazed and admired Om Bai’s efforts. Thus, began an intensive training on best practices in livestock rearing in the village for the benefit of all.

The not-so-shy, though still soft-spoken, Om Bai is now a leader in the village! Not only a leader among the womenfolk of the village, but a leader in adopting modern technology in farming and livestock rearing. From using a motorized weeder to doing trellis based vegetable cultivation to organic farming, she knows it all. 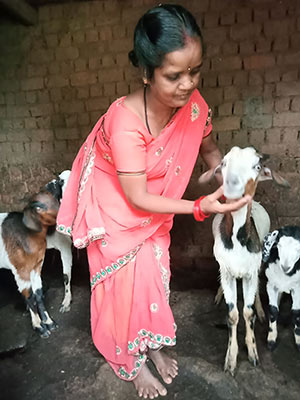 Now popularly called the ‘Lakhpati Kisan’, Om Bai has inspired and trained many women. “Never limit yourself within the four walls,” she advices the women of the village. “Step out of the ‘Lakshman Rekha'. There is a beautiful world waiting.”

From a girl with no dreams, Om Bai says she’s learning how to dream big! And not just dream big, she is also giving them wings.