Sunita Mahato never thought, even in her wildest dreams, that a day would come when everyone in Asantaliya Panchayat would know her name, respect her, and would be eager to contact her. Farming has been in Sunita’s genes, being the daughter of a farmer and married to a farmer. Even when she first learnt and applied System of Root Intensification on her paddy field to witness a sea change in the yield, this thought that one day she would be a common name in every farmer-household of Asantalia was far beyond fathom for Sunita. It has been a few years since then. Sunita mastered various improved agricultural techniques, her fervor increased.

But for the rest of Asantaliya farmers, the dark clouds of lesser yields and sporadic crop failure continued. It was Sunita’s turn to show them the way.

The Mahato and Ho farmers of Asantaliya are extremely arduous in their fields. Although located pretty close to Chakradharpur, which is their block headquarter, the Asantaliya farmers never got any extra mileage in terms of better agrarian opportunities. In fact, why to single out lack of agrarian opportunities? They are totally dependent on agriculture for their living, but they have never got good quality seeds or fertilisers to sow and grow their crops. Erratic rainfall is common, something that none has control over, but the very scope of reaping better by using healthy inputs had never existed in Asantaliya.

“Leading life by growing crops is challenging. And it seemed we were being pulled behind due to lack of healthy seeds and good quality fertilisers!” recollect members of Kamal Phool Mahila Mandal, a self help group (SHG)formed way back in 2003 by a couple of PRADAN staff.

Sunita Mahato is one of the members of this SHG. Seeing other women from her hamlet joining the choir, she asked her husband, Munilal, if she could also join them? “Sure, go ahead”, was his response. In fact, Munilal was equally curious to know what was this new technique, SRI, that Sunita learned from her SHG meetings?! That monsoon, they adopted SRI for their own paddy field and the result bewildered the entire Asantaliya. On the other hand, barring a handful of her SHG members, others hardly wanted to try this new technique, despite seeing the results. 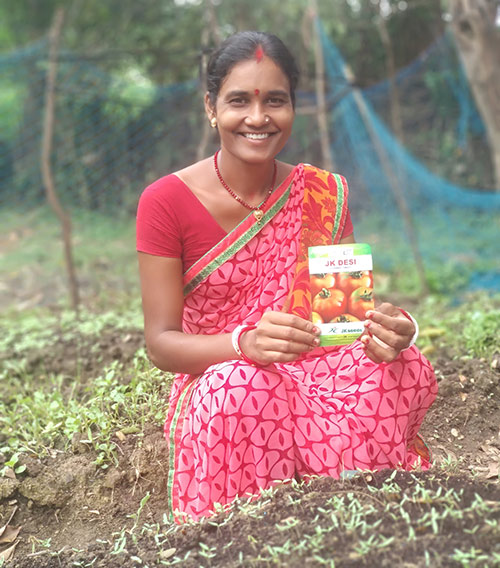 “Sunita could afford to take the risk, and somehow her efforts clicked. What if we fail? Whatever meager we manage to get for our own food will also perish in the fields”, said Asai Jonko, one of her neighbours.

By the next monsoon, Sunita decided to support other farmers too, instead of focusing on her own crop. Of course, her challenge doubled – not only she had to ensure results for her own crops, but also had to take a larger task of helping several others get the same. Sunita started attending all the trainings that PRADAN arranged on agriculture, be it paddy or any other crop, Sunita used to be the most regular and attentive face in each of the sessions. A mother of two, this she could have hardly done without the relentless support from her husband. Sunita’s passion for learning and sharing the learning for the betterment of other farmers was clearly visible to all. She became the Agriculture Resource Person for Asantaliya. 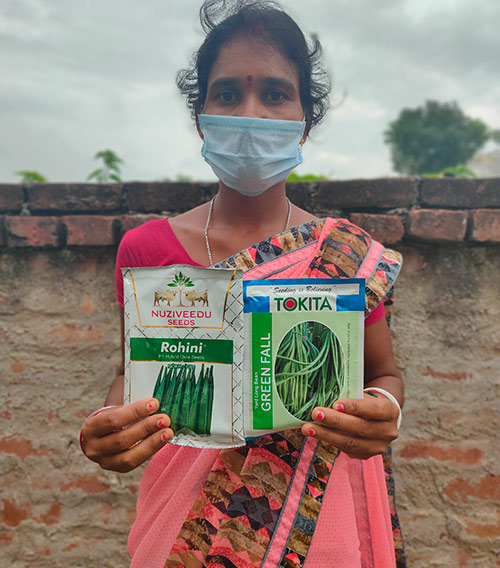 Asai, Sukumaro, Bajanti, Sudhila, Basmati along with many other farmers of Asantaliya started experiencing change. Change for good! Their yield doubled.

But there was no resting on her laurels for Sunita. She sensed a bigger crisis looming large for all of them. Lack of good quality seeds, fertilisers and timely intervention for managing on-field crops were some of those issues. During the evening leisurely meetings or mid-day training sessions, farmers used to raise these concerns with Sunita. She turned to PRADAN for help. Sunita acquired good quality seeds and reached the doorstep of the farmers with a good rate. Some of these farmers found good results in Okra and Tomato using seeds provided by Sunita; they started procuring seeds from Sunita on a regular basis. As a result, Sunita became synonymous to a seed-market in Asantaliya Panchayat. She also visited SHGs in Gumla, some 170 kms from Chakradharpur, to draw insights on Agriculture Entrepreneurship, last year. Sunita ascribes a lot of value to this exposure, it actually changed her life. Coming back to Asantaliya, she invested Rs. 5000 to purchase seeds and then she sold them to earn a profit of Rs. 1500. Sunita was all set to start her full-fledged business. Last monsoon she invested Rs. 45,000 to make a profit of Rs. 13,500. On the other hand, the farmers witnessed unprecedented increase in their yield! This winter, she has invested Rs. 30,000 for developing seedlings of ‘winner’ crops such as cauliflower, cabbage, tomato and brinjal. With help of other SHG mates she prepared 20 beds in 3 days and within just a few she sold out 36,000 saplings at the rate of Re. 1 each.

“I have learnt how to make money, will certainly earn a lakh one day. But it gives me immense satisfaction when I see that more than half of the sellers in Asantaliya market are earning profit from saplings that I sold to them”, claims Sunita.