Sowing Better So That They Can Reap Better by Nrusingh Charan Sutar, Ranchi 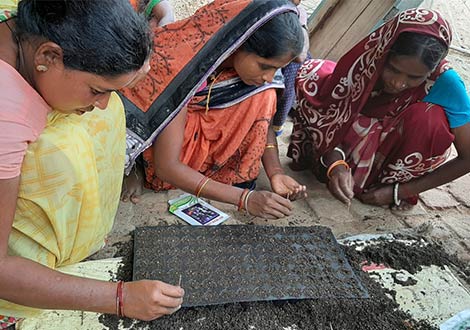 PRADAN being the National Rural Livelihoods Mission Support Organization (NSO), has been supporting Jharkhand State Livelihood Promotion Society (JSLPS) since 2015. Apart from assisting farmers in developing vision, adopting approaches and strategies, and creating perspective plan around livelihoods we also provide technical and handholding support to the field teams by placing Community Resource Persons around Livelihood (L-CRPs). These cadres are selected, groomed, and placed in different blocks where PRADAN supports.

Parmohan Sahu was selected and trained by PRADAN on various aspects of farm based livelihoods to help him become an expert L-CRP. A progressive farmer, with some interest in spreading his knowledge and capabilities to other small and marginal farmers of his village, Parmohan started meeting the local farmers of Jambahar village in Simdega district of Jharkhand, during spring 2019. Jambahar is inhabited by people belonging to the Gond, Khadia, and Munda tribes. They were mostly dependent on agriculture and livestock rearing along with some non-timber forest produce for earning their income. When Parmohan started his interaction with these farmers, it was time to plan for the upcoming Kharif season. Parmohan asked them about their plan the upcoming monsoon.

“We grow paddy and some vegetables every year. We keep a certain portion of the paddy we produce for our own consumption and if we manage to produce some surplus then sell that in the local market. Vegetable production is insignificant as we grow some only on our homesteads” said Usha Pradhan.

“But I have certain techniques in my knowledge – and have seen people getting benefitted using them. Would you all want to know them? Practice them? And earn four times the amount you do now?” questioned Parmohan.

Jambahar farmers exchanged looks among themselves. There were some 15-20 of them, none looked confident to try out anything new. “I don’t know really, but maybe….yeah… small and poor farmers like us hardly possess anything to lose! Those who have dared to migrate to distant cities for a better income, have seen good times – but we have never”, said Usha, hesitantly.

“At least see what I have got to show you. Don’t try if you don’t like them – but trust me, techniques like SRI or community vegetable nurseries have transformed lives of thousands of small farmers like you in other pockets of Jharkhand…and in other states of the country.

“We have never grown vegetables in such a huge quantity which can be sold in the market”… “we are not confident – and what’s this concept of farming together?” …. “How will we decide which sapling belongs to whom?” several such questions and apprehensions were directed to Parmohan.

“Let’s learn from people who have already done it and have benefitted out of it. How about some discussions about those farmers?” suggested Parmohan.

“You can also do it. And yes, if you take one step, trust me, the government officials will take ten steps to support your initiatives”, assurance echoed in Parmohan’s voice.

Jambahar farmers seemed a little convinced, although they were in a fix. How to get the land required for creating the community nursery for vegetables? Solution was not far away though. Fulmati and her husband, steady enthusiasts for development of Jambahar, proposed to share their land for erecting the community nursery for vegetables. Frowns on the faces of the gathered audience got immediately replaced by radiant smiles! They unanimously decided to grow chilies.

Parmohan flagged off the construction work and within the next few days, 19 of the local farmers erected a bamboo net house. In fact, they constructed the main structure within just one day! Bamboos and mosquito nets were easily available in the vicinity which they used to prepare the net house. With regular care and impeccable guidance from Parmohan, they grew lush green chili saplings in a few weeks’ time and transplanted those to their individual crop fields.

During transplantation, the District Program Manager of JSLPS invited the then Deputy Development Commissioner (DDC) of Simdega district to witness the efforts of Jambahar villagers. The DDC was reasonably astonished to see their zeal for improving their living and farming conditions!

Usha Pradhan recollects her experience of the visit. “We told him that the present structure is too weak and will be withered away by the monsoon. Please help us with a more durable structure for future nursery pactices – maybe a polyhouse? ”. The DDC went away with some assurance of help.

Last year, the Jambahar farmers earnt an additional income of Rs.15,000 on an average – and Usha made Rs. 20,000 by selling the chilies.

And yes, the DDC kept his promise. If anyone goes to Jambahar today s/he can see a brand new polyhouse with nursery trays, on the same plot where the erected the first net house last year. The DDC also sanctioned a 200-300 ft deep bore well with solar panel to the villagers.

Usha, Fulmati and other farmers have always worked with utmost dedication. But seldom had they dreamt of being able to create new avenues of livelihoods for themselves and for the neighbouring villages. Seeing their triumph, farmers from all the adjacent villages have started adopting community nursery – a reliable means to secure better income. And therefore, Parmohan has a bigger reason to smile, today.