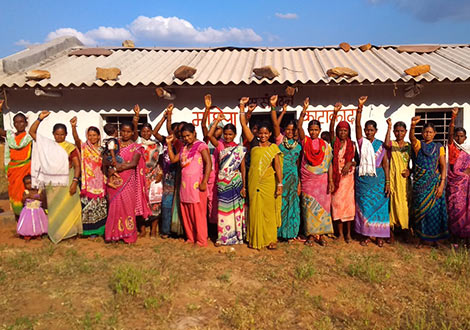 “I will raze your building to the ground” threatened the Sarpanch.“This is our home, made with sweat of 100 women, we won’t let you touch it” retorted Preeti, the President of Mahila Gram Sangathan, Katakanda.

About 500 people, mostly belonging to the Madiya Gond tribe, inhabit the Katakanda village in Darbha block of Bastar district in Chhattisgarh. Being marginal farmers with an average annual income of Rs. 30,000 and literacy level as poor as 26 per cent, the Katakanda villagers lacked the confidence to address issues that had kept bothering them since ages. Even, raising their voices for the malpractices in the local Ration shop was something they avoided.

In 2014 PRADAN started working in Katakanda. Four SHGs were formed with the local women farmers. By 2016, three more SHGs came into existence and these seven SHGs came together to form their village organization (VO) named as Mahila Gram Sangathan Katakanda. The VO started discussing around women’s rights, domestic violence, malpractices at the Panchayat and PDS shops and many more.

However, while conducting these meetings, mostly under the banyan tree or in the open field, the members faced another problem. In summer, the temperature would soar in the afternoon, and sitting at one place under the dazzling sun would be too difficult. In monsoon, their sessions would often get washed out by heavy showers. In fact, irrespective of seasonal variations, discussing some of the sensitive topics would always be very difficult in such open places.

“We need a building for our VO and SHG meetings”, they decided.

They planned for submitting a request to the panchayat for their own building. It was not the first stint for them at the Panchayat. They had met the Sarpanch a couple of times before as well, with different demands. And just like the earlier times, the Panchayat refused to accept their request! They went to the Tehsil office, met the Tehsildar who promised them that a building would be made for their official meetings. Two months lapsed. They followed up on regular intervals, but nothing moved. On the third month, the women gave up. They summoned a VO meeting.

In that meeting, Preeti Kashyap, the President of Mahila Gram Sangathan, spoke with a determined voice.

“So what if they don’t support us?It’s our home and we are capable enough to build it”.

A couple of other members like Jayati and Balmati supported Preeti. But rest of the members were in two minds. Each of the SHGs started discussing the matter. Some thought of complaining against the in action on behalf of the local administration, while the others spoke in favour of Preeti’s option. Weeks of deliberations and counter-arguments followed. At last, they arrived at the unanimous decision.

The initial excitement and zeal stumbled against multiple impediments on their way. Convincing all the SHG members to begin with, getting a land for the building, looked an uphill task. Seeking help from the Panchayat was not an option any more. Finally, help came from elders of their own village who supported the cause of these women, and permitted them to construct their building near the primary school.

The ground was all set to start the construction. But what about money to fund the work? All they had was Rs. 35,000 received as the Start-Up fund sanctioned under the National Rural Livelihoods Mission. Preeti, Jayati and Balmati knew this was not going to suffice. Repeated meetings were held among all the SHG members. Each of these meetings revealed the rock-solid determination of the members. Each woman pledged to make 20 mud-bricks to construct the building, and each SHG would contribute Rs. 2,000. Apart hiring masons, each of the SHG members decided to physically contribute in the process. The villagers, specially their husbands, who were initially against their initiative, started supporting them. If the women failed to attend the work, their husbands would fill in for them!

They worked non-stop. They worked as one team. They worked towards one goal. In just two months’ time they inaugurated their office.Madiya Gonds are known for singing and dancing under the open sky, day and night. And this time, it was more than a social occasion. All the men and women came together, they sang and danced with vibrant drum beats! After all, it was “their own home”. The whole village joined the feast.

The Panchayat officials were not going to digest this success easily. Jibes and threats poured in.

“I will raze your building to the ground” threatened the Sarpanch. “This is our home, made with sweat of 100 women, we won’t let you touch it” retorted Preeti.

Today all the SHG meetings,the VO meetings, all kinds of trainings to SHG women and accountants are being conducted comfortably in this building. The challenges that came from the Panchayat have actually made them further strengthened and united. This episode of struggle that ‘100 women dealt with their sweat and determination’ have made Preeti, Jayati and Balmati more resilient and equipped, to take up any issue that perturbs Katakanda villagers, than ever before.