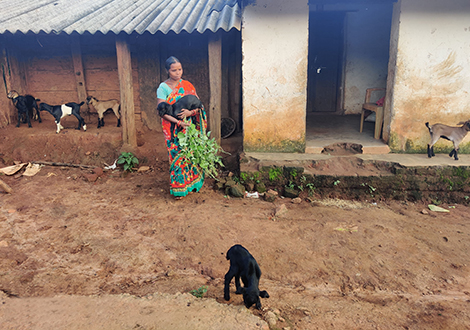 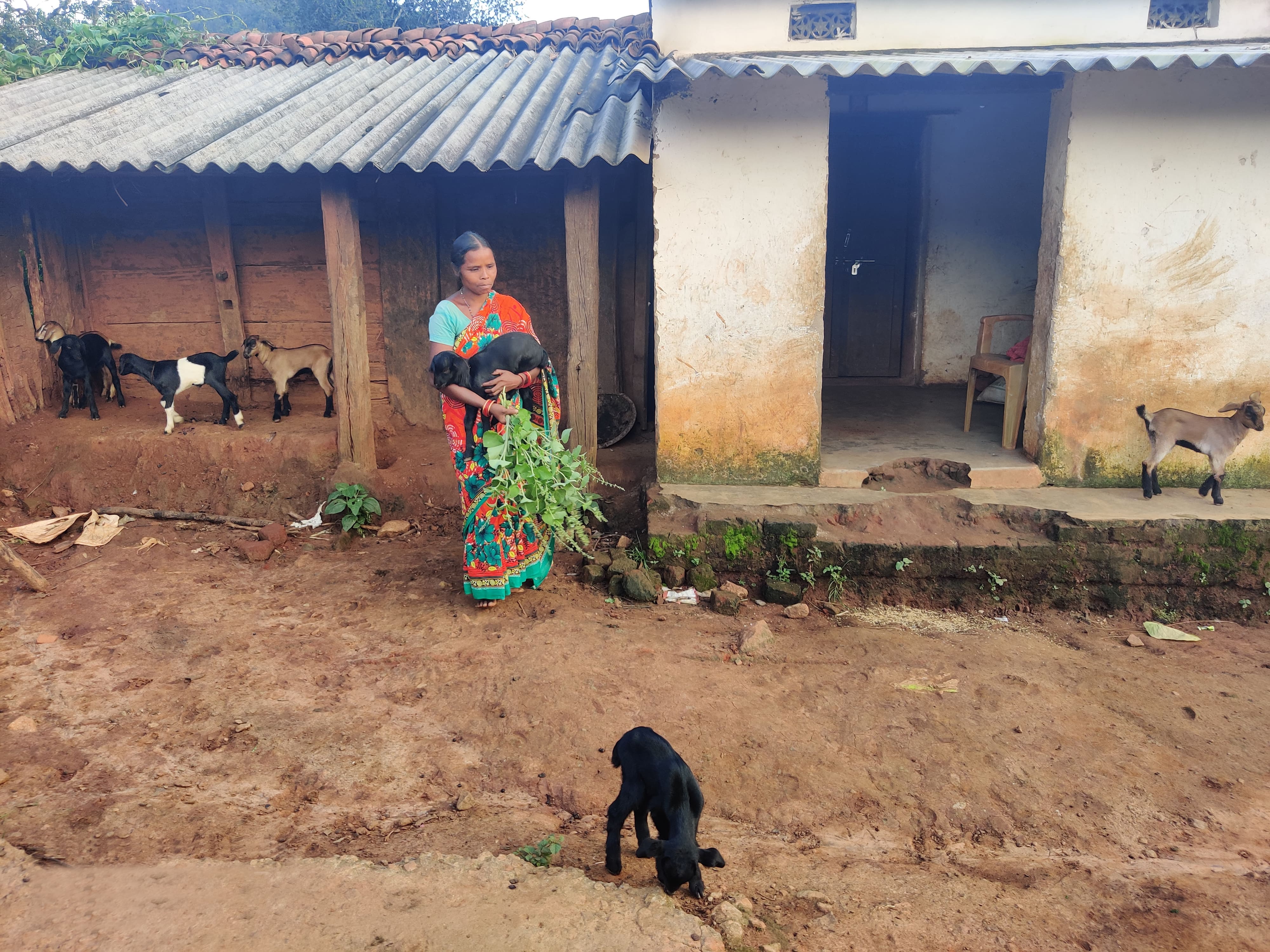 Kadiganda, one of the remotest villages surrounded by dense forest in the Kandhamal district,has set a great precedent for others. Traditionally, the major source of livelihood was hunting in this area. While the Dongri Konda tribal community kept livestock at home as part of their culture, it was never considered it a livelihood option, till 2018 when PRADAN began its engagement in the area. This area in the Baliguda block remained largely untouched by government programs and interventions too. Our interventions over the last three years have resulted in a significant shift in the livelihood pattern of 23 families residing in Kadiganda village.

The families in the village had begun to meet their livelihood needs through agriculture or collection of NTFP produces form the forest. However, due to the hilly terrain, and small patches of land, productivity was sub-optimal and inadequate for their needs. There was no other source of income for the families. Since all families reared livestock, they would use their livestock for their cash needs during emergency times.

Over time, the villagers realized that their livestock used to die without really understanding the reason behind the livestock mortality. Diseases like ‘Bird flu’ and ‘Peste Des Petits Ruminants’ were the main cause of the mortality among poultry and goat, respectively. Because of the high mortality, the households slowly discarded the traditional practice of rearing livestock at home. In 2018, only seven households had some kind of livestock at their home.

Initial ground work indicated the following as the major issues causing poor health and mortality of the livestock:

Key LEAP initiatives – After the lifting of the lockdown our teams started intervening in the village. At that time the health of goat had deteriorated a lot, and the stock of backyard poultry had considerably reduced in each family (zero in some cases) due to a break in vaccination. The interventions undertaken were:

Activity 1 – Formation and strengthening of collectives

To kickstart the process the village community was facilitated to conduct monthly meetings to discuss important livestock related issues. A Producer Group, named “Swarna Utpadika Goshthi”, was formed by the families of the village and some families of nearby villages. A master trainer was assigned to create awareness and build technical capacity for integrated livestock rearing. Vaccination and de-worming by the Community Animal Health Worker (CAHW) was initiated. PRADAN teams help provide technical training to the CAHWs centrally to ensure proper delivery of services and sharing of know-how with the villagers.

Vaccines are now being stored in a deep freezer, supported by a generator to ensure 24x7 power supply to maintain temperatures between 0-to-14-degrees.

CAHWs take these vaccines in a vaccine carrier to their villages and either administer the vaccination within 24 hours or keep the vaccines in a fridge and vaccinate within next 2-3 days. The CAHWs are gradually turning into entrepreneurs, earning on an average INR 20,000 over a period of 8-10 months by selling feed and providing health services.

To address the deteriorating health of livestock, goat and BYP feed training was provided to all villagers. Bokashi and Sushama Dana are feeds that were prepared during the training period, and fed to the goats and BYP. Within a month all the goats and chickens became healthy.

Average weight gain of goats before and after the feed intervention was as follows:

However, the special feed has resulted in almost a 40% increase in the cost of feeding. To reduce the feed cost, Azola (an eco-friendly bio fertilizer and livestock fodder) pit promotion training was conducted by master trainers. The inputs (towards, polythene, net and others) was sourced with the help of the PG. This process reduces the feed cost considerably.

Activity 3 – Construction or renovation of shed

This intervention sought to address the issues related to disease infliction due to ‘ecto’ parasites, and predation.

The villagers decided to construct day shelters for the livestock. While two members took the lead in the activity, within a month 14 other families constructed the net house for day shelter. Predation has got completely controlled in the village now.

Training sessions for shed renovation and cleaning were conducted in the village. The importance of having a raised platform (2.5 feet height) and cross ventilation was also demonstrated. CAHWs with PG members worked together to renovate all sheds in the village within 5 months. 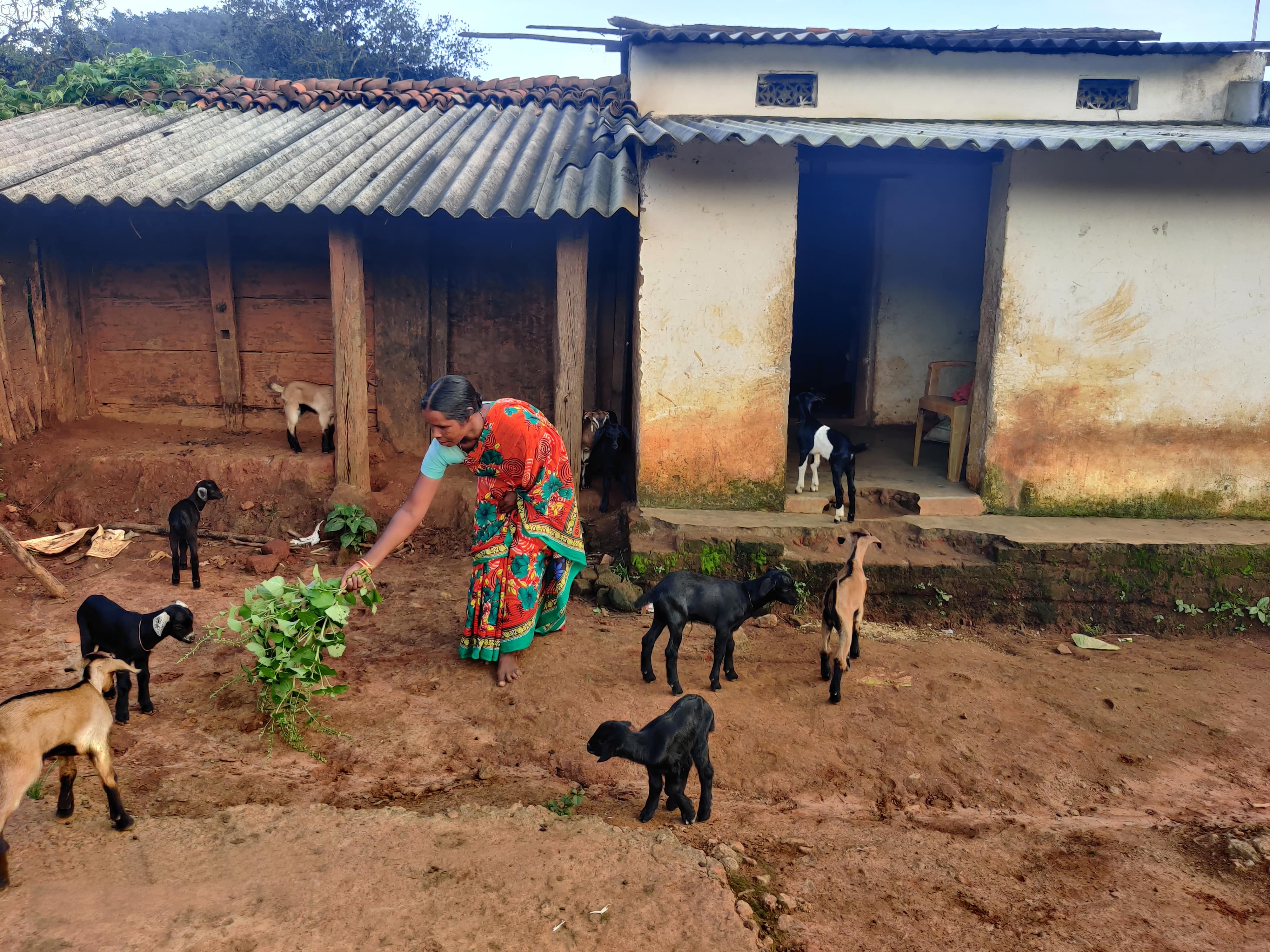 Overall there was a considerable increase in the total herd size of goat and BYP in the area – number of goats increased (due to low mortality and better health) from 75/80 to over 300 nos. BYP stock size has gone up from 15/20 to over 200 nos.

The average income from livestock rearing has gone up from INR 15,000 – 20,000 to over INR 40,000 per annum. The CAHWs are also earning to the tune of INR 3,200 per month starting from negligible sums before the interventions.

Nilabati didi is beaming from ear to ear as she shares, “I have been able to build my house because of goat farming.” The overall number of households engaged in livestock rearing has gone up from seven to twenty-one seeing the positive outcomes of the initiative.

Livestock rearing has clearly emerged as a profitable “mainstream” option of livelihood, from being a fall back, emergency source of cash.