Got a Faulty Motorbike? Indravati Can Fix It
by Anurudh Kumar Shastri, Narayanganj 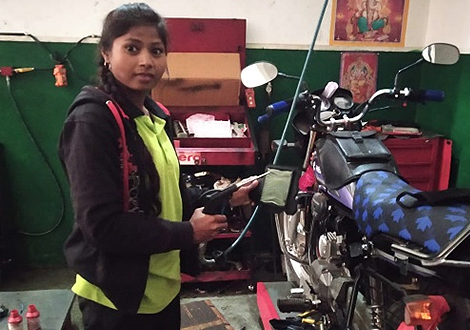 Manoj Warkade died when he was barely 25. The oldest of three siblings, Manoj loved to ride motorbike. He would ride his machine through meadows, farm fields – at times cross rivulets, and climb hillocks, at ease. Everybody in his Amdara village of Narayanganj, Mandla district in Madhya Pradesh knew about his passion and would blindly vouch for his skills of riding two-wheelers. But Manoj died. Died of a road accident while riding his bike. When Indravati, his younger sister, got the news, she thought it’s a joke and she refused to even listen to it. A flurry of feelings followed – disbelief, despair and denial. Indravati was numb for weeks, so were her parents. Neighbours would console, but all expressions of compassion fell short in pacifying the sister’s heart.

Indravati was equally passionate about riding motor-cycles. She loved to ride pillion with Manoj. “Well I don’t have wings – but whenever I rode a bike with my bhaiya, I felt like flying – it’s so much of freedom!” Indravati used to look up to Manoj in every aspect of life, but with his death, Indravati started feeling the need to supplement family income. Dinesh, her younger brother was still pursuing his graduation. Meeting all expenses for a family of four, with a humble Rs. 50,000 a year from agriculture turned out to be too uphill a task. 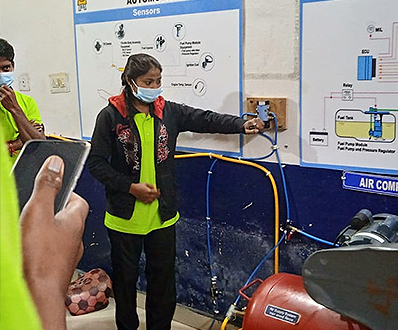 Indravati had completed her graduation in science – a very rare thing to be found among girls in these remotest of villages in India. So, adopting a career path involving technical knowledge looked like a good option. She came to know about Yuwashhastra program, conducted by PRADAN in Narayanganj block. It provides rural youth with an opportunity to explore and learn skills as per one’s own interest and the prevalent demand in the market and make informed career choices. In the remotest corners of the country, the youth, through generations, have got very limited opportunities of livelihoods and income generation. Propensity to take up different career choices, discarding agriculture, has grown over the time among youth as awareness about urban lifestyle and opportunities available in cities started increasing. Yuwashastra has provided these youth with an option at their doorsteps, to develop their skillsets and live a life of their own choice. A life different from the average rural citizens.

Indravati’s passion for motorbikes triggered her to join the program. It’s during the Reimagining the Future sessions and the associated counseling offered at the Yuwashastra program that she chose to become a two-wheeler mechanic. She had always wanted to ride a bike and was fascinated by the thrill a motor-cycle ride offers.

“But becoming a motor mechanic has always been a ‘man’s’ domain – how would my relatives and neighbors react if I start repairing bikes wearing dress of a mechanic!?” Indravati was caught in two minds. 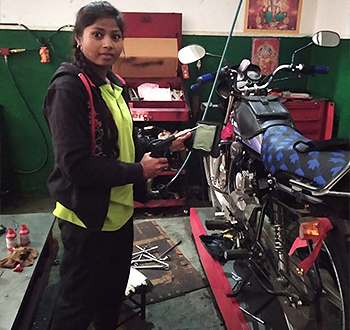 However, breaking her ‘glass-ceiling’ got a little easier with support from the Narayanganj PRADAN staff, who helped her to get inducted in a two-month rigorous training program organized by PRATHAM. She is on the verge of finishing her training and will soon be placed at a service center in Jabalpur. She is about to join a workshop in Jabalpur, as a motorbike mechanic where her salary would be Rs. 8000 per month – an addition of almost Rs. 100,000 to the family’s annual income!

“Working at another workshop will not be good for a longer stretch of time. I will open a two-wheeler workshop at the block town of Narayanganj. I wish to inspire other girls of Narayanganj to choose this profession – it’s time to do something different from attending school and then getting married at a very early age.” Claims a confident Indravati.

True. Afterall, the aim of education is to help someone think and act differently. 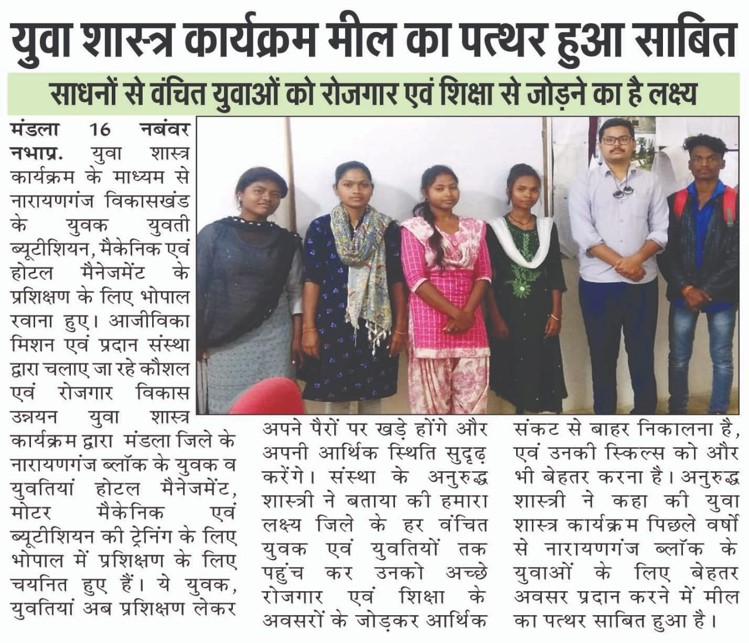