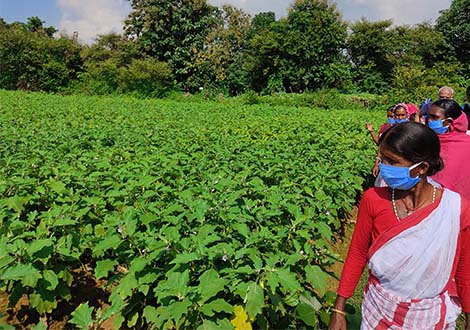 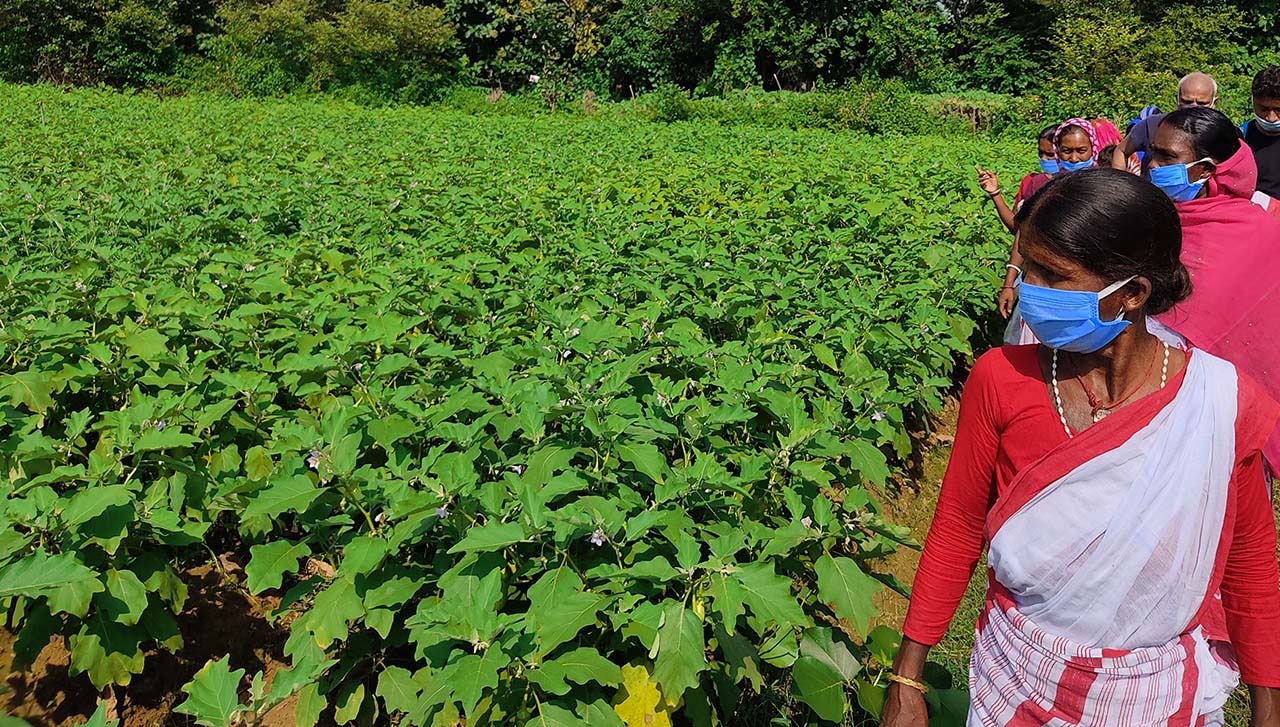 Amidst the lush green forest in the foothills of Ajodhya Hill range lies a small village called Chirugora. The village has 121 households with a total population of 795 - 391 women and 404 men. Chirugora alias Chirudi comes under Baghmundi block of Purulia district, West Bengal. Since, this village is surrounded by forest, the daily lives of the people are more or less dependent on forest for food and fuel. However, over the years agriculture has become the major occupation and livelihood for all the families in the village. The change got initiated through PRADAN’s efforts of increasing agriculture production and income enhancement by collectivizing the women into Self Help Groups (SHGs). There are currently 11 of those SHGs in the village. One of the game changers was the introduction of Systematic Root Intensification (SRI) in paddy that helped the village become food secure. The intervention through improved agriculture techniques and use of equipment in cereal, pulses, oil-seeds, fruit orchards and vegetable trellis have increased the income of the families and brought diversity into agriculture and their plates. Despite practicing agriculture for many years, their farming was dependent on the monsoon season. Due to lack of irrigation facilities farming was limited to mono-cropping systems and severely limited the family income. The land holding which is on an average of one acre per family, coupled with the type of land where 60% of the land are uplands, lack of technical knowhow and lack of markets nearby, further contributed towards low income from agriculture.

Despite the initial interventions, challenges in agriculture have remained the same. The major challenges faced by the community are as follows: -

The above-mentioned bottlenecks in agriculture were identified in a series of meetings with the SHGs and community. A need was identified for an organised collective effort to ensure minimal loss and maximum benefits to the farmers. Thus, the FPO concept was evolved, and Chirugora is one of the Producer Groups (PG) under the Baghmundi Jangal Mahal Mahila Farmer Producer Limited. Under the banner of this FPO, during the month of December 2021 the community could sell around 14 MT of tomato, chilli, brinjal and bottle-gourd at Bokaro, Tata and Durgapur. For the first time, Chirugora farmers could sell their produce right at their door steps without having to spend any money on transportation.

Breaking the age-old practices of growing conventional vegetables, farmers of Chirugora started the cultivation of exotic crops like broccoli, capsicum and red-cabbage. Twenty-five families with a total land holding of 80 decimals earned an income of INR 300,000. Chirugora became the first village that promoted these crops across the whole block. Even though these crops have low consumption in the local markets, the FPO is promoting the activity on a large scale to sell in other markets. The farmers are using organic inputs in the broccoli fields.

The FPO has also introduced drip irrigation in the land of Jalamani Majhi, a member of Chirugora Producer Group, which is of 1.5 acre in the month of March 2021 through Pradhan Mantri Krishi Sinchayee Yojana (PMKSY). Through this initiative Jalamani Majhi invested around INR17,000 and earned around INR 43,000 gross income in one season. The pandemic had challenged the community during Kharif season as the movement was restricted hence getting seeds for their cultivation was one of the major concerns. But that’s when the FPO came to the rescue and delivered seeds at their door steps. Seeds of paddy, cucumber, bitter gourd, ridge gourd and brinjal, amounting to INR 50,000 were provided by the FPO.

The recently installed solar lift pump has been a blessing for the farmers of Chirugora. Forty-six farmers are now able to use the water over 21 hectares of land for agricultural purposes. The farmers are required to pay service charges to their FPO to use solar pump water in their respective fields. As of now, for every 33-decimal land, farmers need to pay INR 30. The PG is monitoring the overall physical and financial activities related to the irrigation system. 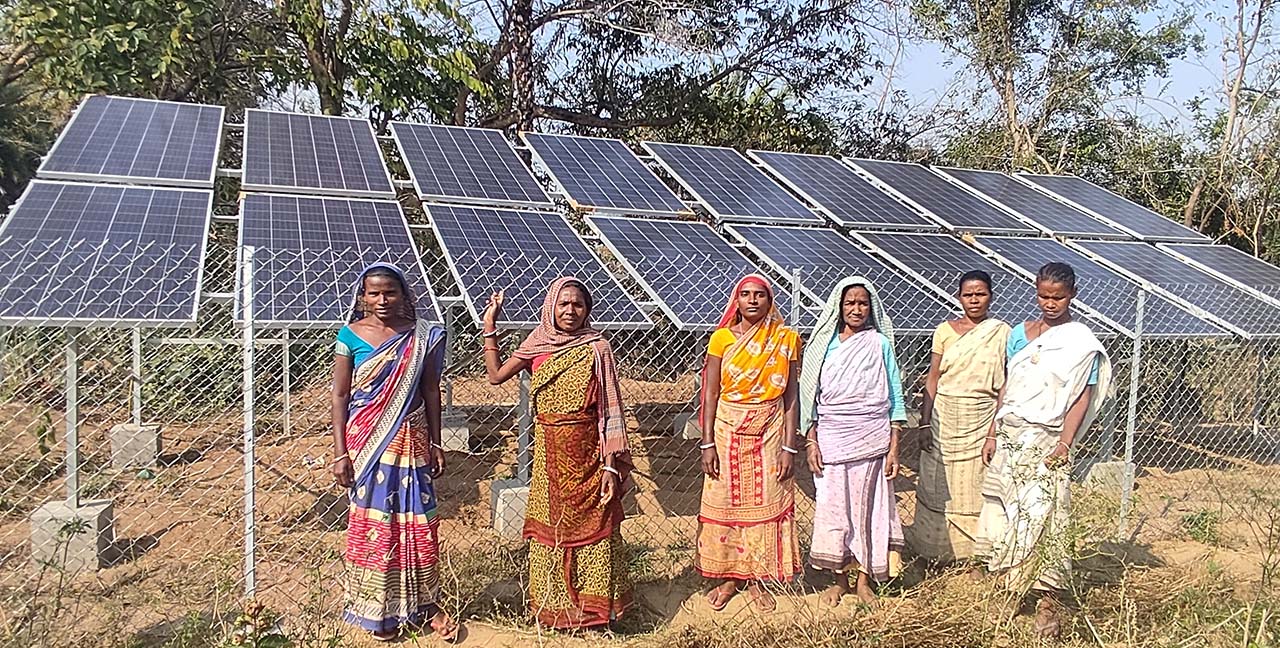 Apart from that, the farmers have decided to adopt the approach of Regenerative Farming, which believes in eliminating the use of chemical fertilisers and increasing soil fertility by using bio-fertilizers. Kalabati Mahji of Chirugora was among the first farmers to adopt this practice for her broccoli and cabbage farm in her 16-decimal land.

The practice had generated skepticism among the farmers in the beginning. But after adopting the process the farmers were surprised to see the production and quality of their vegetables. This low-cost but effective, zero-chemical inputs based practice, has not just improved the quality of the luscious green broccolis and cabbages, but these healthy and nutritious crops have gained popularity both among the communities and their market.

Currently 45 farmers have adopted this new approach after the immediate installation of the solar lift pump. During the peak summer months of March, April and May, they began with a nutrition/kitchen garden in their homesteads. On a two-hectare land, the farmers grew different types of green leafy vegetables, bitter gourd, ridge gourd, brinjal and more for self consumption. Hence, enhancing their nutrition intake while also selling some of the produce in the local markets. 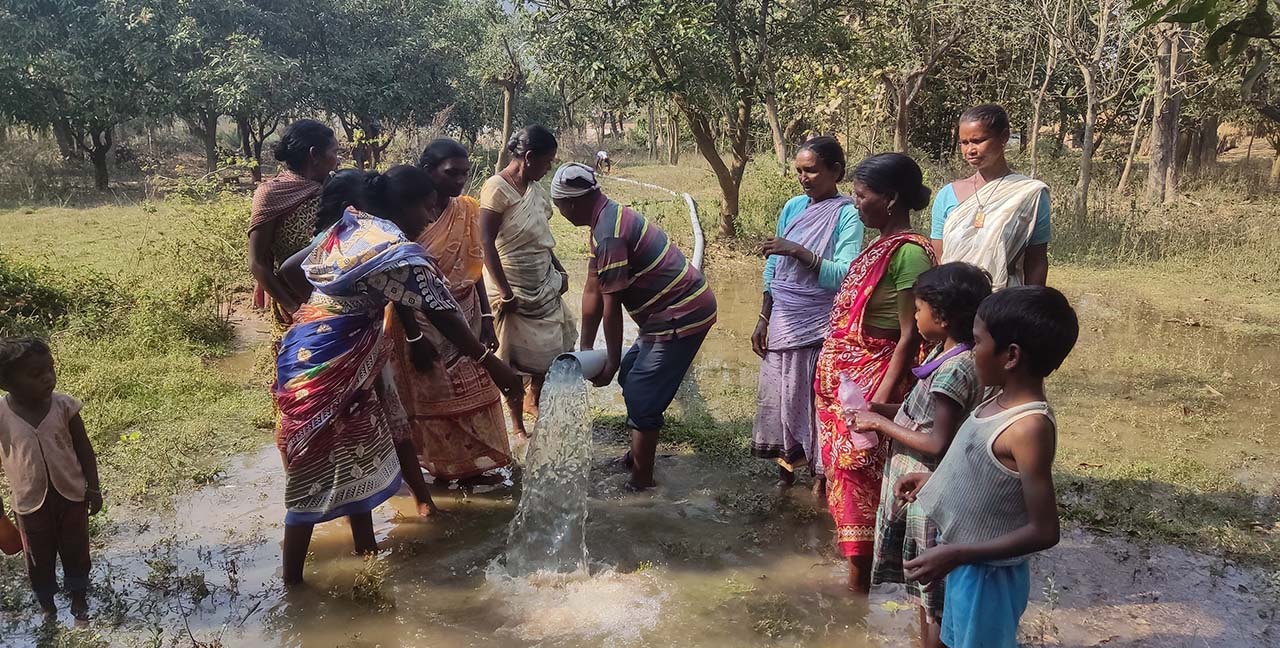 The process of engagement with the community through the FPO intervention has boosted the community’s confidence in agriculture, increased the bargaining power of farmers and their access to multiple markets, helping them get the right price for their produce. Collective farming has also increased the risk-taking appetite and ability of the farmers to try new crops and farming practices. 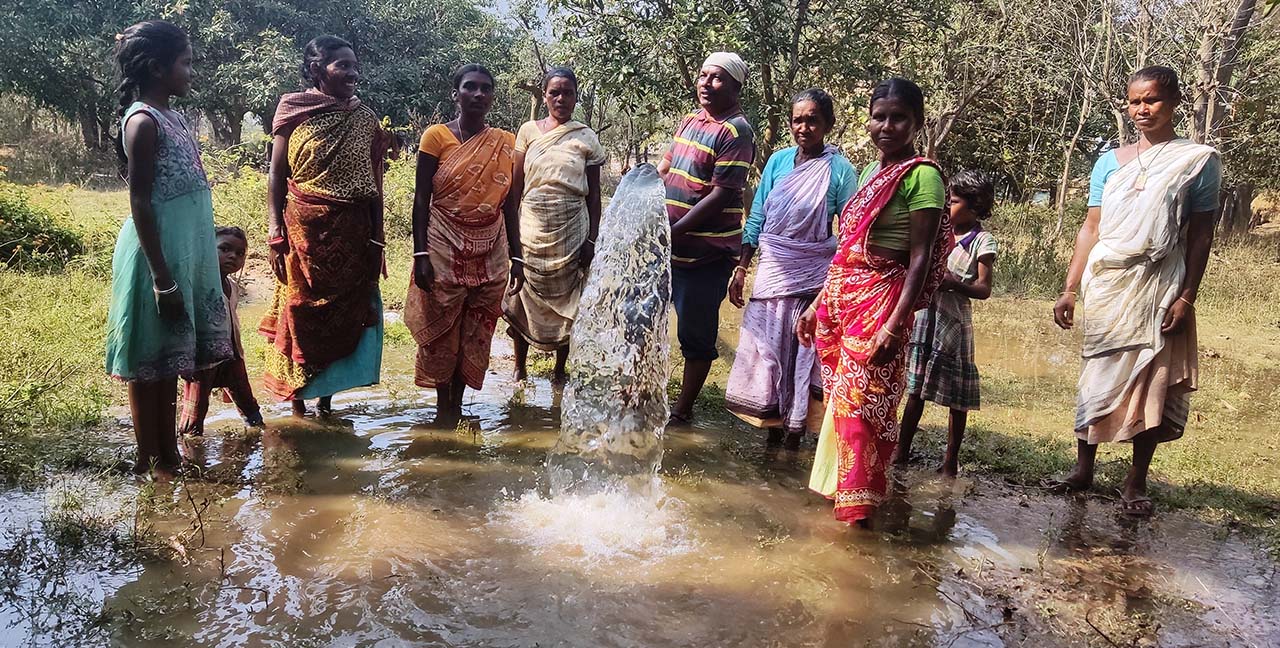 Women of Chirugora had never tried their hands at running such big solar panels and pumps before. However, the they broke the stereotype that “women are not meant to use machines.” From constant monitoring of the solar pumps to starting the machine, they have taken these so-called tasks of men in their own hands. The key of the solar pump is rotated every month among five members of the PG. They are planning to provide training on its basic manuals and maintenance during the coming days. 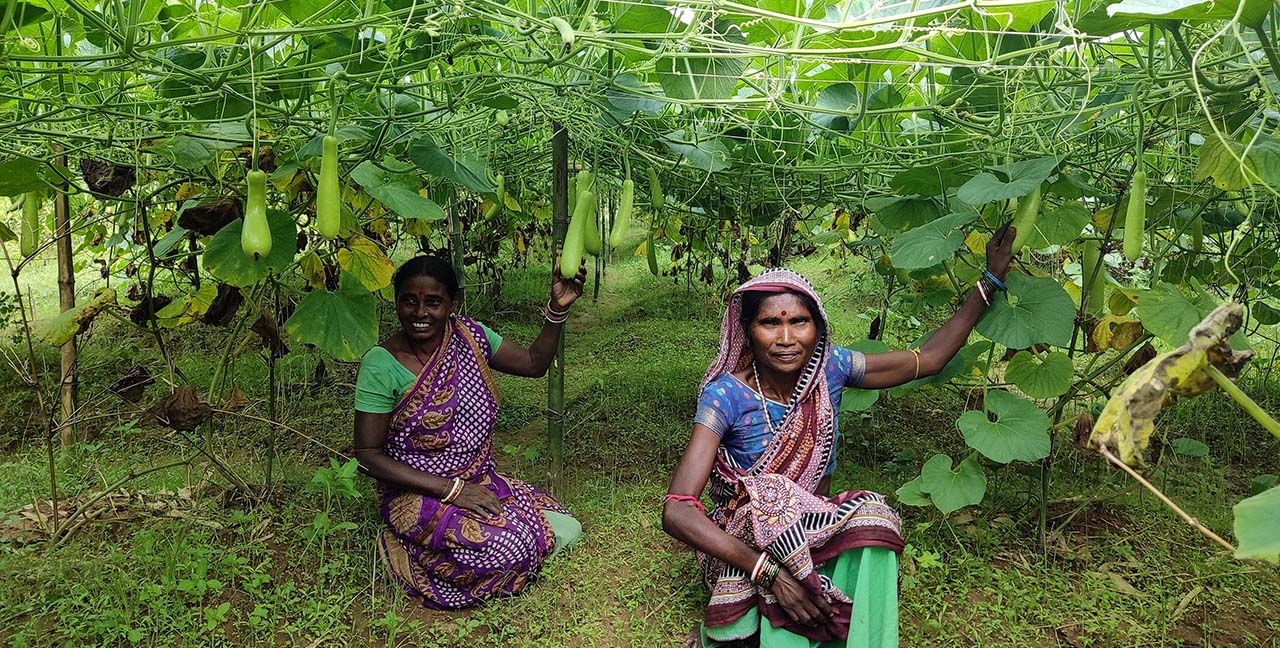 The current focus of Chirugora PG is the monsoon season for which seed procurement has started and with a target of producing 130 MT of tomato, creepers and brinjal for the coming season, ensuring a minimum income of INR 50,000 per family through vegetable cultivation. The FPO has also taken steps in ensuring irrigation facilities for summer crops through convergence with PMKSY for drip and sprinkler irrigation and Water Harvesting structures (WHS) through MGNREGS. The community has submitted a plan of around 18 acres of land for drip irrigation that can benefit around 90 families, 70 families for sprinkler irrigation and 26 WHS that can benefit 78 families. The PG is also planning to engage at least 90% of the families under the FPO to be shareholders and to be active members of the collective.