Dancing in the rain amidst Covid-19
by Sneha Kaushal & Kuntal Mukherjee, Kanker 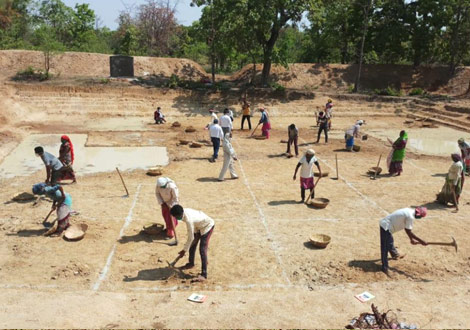 Seetabai and Balram stepped out to meet the Panchayat leader to ask when the land development work was going to start in their village. It being the end of spring in their part of Chhattisgarh, the mid-day sun of early-April was reasonably warm. Walking down the meandering lane that takes one to the main road from their cottage, Balram looked at a vast tract of undulated land, demarcated for creation of water harvesting structures in a resource planning exercise for MGNREGS done in their village a year ago. Work was supposed to start by early spring.

“How are we going to pay back our Rs. 5000 debt to the grocery shop, and buy medicines for father, if we don’t get our wages from MGNREGA work Balram?” Seetabai’s anxious voice was quivering in the dry hot air.

With a heavy heart, all that Balram could utter in response was a faint “hmm”. Like Seetabai-Balram, most of the families of Khairkheda pachayat were living in fear, apprehension, confusion and doubts and people were unsure if Gram Panchayat would let them work. And, the Panchayats were in doubt if people will turn up or not. Balram-Seetabai could not go far, they were stopped by a patrol van and the local police officials asked them to go back as the area was under total lockdown.

“Don’t you know how dangerous it is to come out on the streets these days? You can get infected by Coronavirus” retorted the officer.

“Is it more dangerous than sitting back at home and starving? How long can we sustain from the ration kits?” mumbled Balram, perplexed.

Charama, in Kanker district is a tribal dominated block. Balram and Seetabai, Sushila and Santuram, Malti and Uttam, Sanjay and Sundaram are small and marginal tribal farmers who were being supported by Sahabhagi Samaj Sevi Sanstha (SSSS), Charama on improved livelihoods interventions. They tried calling the SSSS staff to arrive at a speedy solution and put an end to the uncertainties. Most of the labours were waiting for work to start but there was lack of clarity as to how it could be done without getting infected. When SSSS visited the villages to provide immediate relief in terms of food and hygiene kits, they were surrounded by the villagers – with questions and concerns writ large on their faces.

“Are we going to get our 100-days’ work? How are we going to survive without wages? These rations are going to last just about a week...what after that?”

With trembling hands, the Santurams and Sushilas would take their ration kits, and walk back to their cottages stealthily. No certain response was on the cards.

The message was loud and clear for SSSS. Ration kits had to be supplemented by regular source of income. While the first was still feasible, the second seemed impossible given the stringent restrictions and the threat posed by the pandemic. They turned to their long-term partner, PRADAN for facilitation and a joint planning for handling the crisis. We have been supporting SSSS with livelihood perspective building trainings and guiding them on various nuances of ‘Organisation Development’ since 2009. SSSS initiated various rounds of discussions with the block and district administration and PRADAN. Possibilities of sanctioning land-water work under High Impact Mega Watershed Project, a joint initiative of the Government of Chhattisgarh and a consortium of Civil Society Organizations, supported by Bharat Rural Livelihood Foundation and Axis Bank Foundation, were discussed. Initiation of work, without further delay was urged upon, because every family in the remote villages of Chhattisgarh, was in dire need of cash income. The Principal Secretary, Rural Development, Government of Chhattisgarh issued a letter to districts to re-start the work, and, Rupees Five crore was sanctioned in Charama block to help 12,000 village workers start the work under MGNREGA. 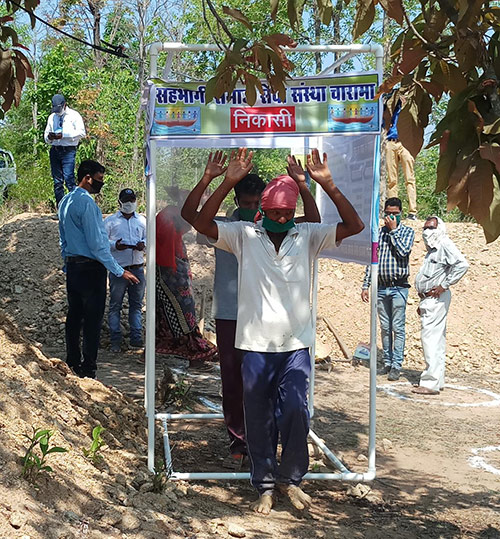 It was now equally important to build ‘model worksites’ where safety protocols would be followed. A flurry of initiatives were planned to ensure safety of each worker. Lime and bleaching powder were advised to be used for marking boundaries for workers so that social distancing could be maintained while working. Sanitization machines were to be installed at the worksites with herbal sanitizers to disinfect the workers before they started the day’s work. Also, washing hands with soap every hour and covering nose with masks at the worksites was made compulsory. All these measures had to be implemented across all the 25 worksites which we aspired to make demonstration plots.

The SSSS staff sounded off the idea to Khairkheda villagers.

“If you ensure this virus won’t affect us while we go out to work, we will join of course. We cannot see our children and ageing parents starve!”

It was a herculean task to say the least – and the lockdown made it seem more difficult. But with active help from the Zilla Panchayet Kanker, and Janpad Panchayat Charama, SSSS succeeded in installing the safety devices across all the sites.

Basant Yadav, the President of SSSS mentioned “ensuring cash income and wage employment at the doorstep is the top most priority. How to link the villagers' demand and NREGA, opening of more works in each hamlet, maintaining the social distancing norms, and proper hygiene is the way forward".

Video conferencing calls were organized in which officials from district and block, Zilla Panchayat, MGNREGA cell, SSSS, and PRADAN interacted with the workers on the worksites. Process of using sanitization machines at the workplaces was demonstrated and the workers were motivated to take all the necessary precautions while working. In addition, wall paintings were done for awareness in the villages.

“We’ll have to keep our faces covered with masks while working – how will we breathe?”

“We will have to adapt to these new norms – we will have to stay safe and secure – that’s the key.” The villagers discussed among themselves.

Sanjay, Malti, Santuram, Seetabai, Balram along with hundred others joined work by last week of April, once the protection equipments were installed at work place. Initially, when the work started in field, the Sarpanch of Gram Panchayat, Technical Assistant, Bare Foot Technician (BFT), Rozgar Sahayak and technical support provider, area coordinator, members of SSSS, and PRADAN to assess the sanitization measures taken. The set-up looked robust, and, SSSS could pull off all these in just about two weeks!

By the middle of May Khairkheda started receiving early-monsoon showers. That day, it was already dark outside before the sun set accompanied by strong winds. Balram returned home and went to the kitchen where Seetabai was preparing dinner. Rice and boiled potato – that was what they have been eating over the past 15 days. Balram kept a big packet next to Seetabai.

“What’s in this packet?” asked Seetabai.

Seetabai’s eyes sparkled with joy as Balram listed out what all was there in the packet.

Earlier that afternoon, Balram got his payment for the MGNREGA work through Bank Sakhi and repaid all his grocery dues. Almost all the workers who had debts in local shops were able to pay back their dues from payments received from the land-water work.

With a stronger gust of wind the downpour started. Balram-Seetabai came out in the open courtyard. They had never experienced a more joyous rain dance before.