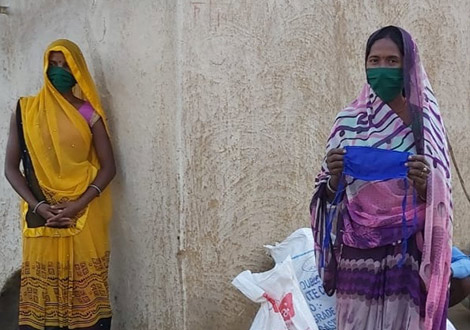 March, April, May are months with special relevance for families in Nayatola, Bikhjhariya, and several other villages of Sarai tehsil in Madhya Pradesh. Most of them, being marginal or small-holder farmers, depend on their neighboring forests to collect Mahua and Tendu leaves, along with a variety of other non-timber forest products. They sell them in the weekly local markets and make some money out of it. Sonia, of Bikhjhariya, had thought of buying some food items from the local markets by selling her forest goods. It often becomes very uncertain to depend on the remaining mid-day meals she gets from the local school or some assistance from the local SHGs to feed all the members of her family. Sonia was all prepared to start collecting the produces when the local Panchayat members came to her hamlet and announced.

“None should step out from now on. Everything is closed. Coronavirus is deadly – if you have to save yourself, then stay inside.”

Nothing has been more alarming in the recent past than this announcement. And like Sonia, hundreds of other people in these villages of Sarai became anxious and perturbed with his news!

“What’s this Coronavirus?”, was the universal question. And the correct answer was not known. Someone said “it’s a dangerous flower that’s spreading wide in the market – if you come out of your home, you will get its smell and you will die.” Another one would counter this theory, saying “It’s nothing but a great earthquake which is going to rip the earth apart. It’s best to stay inside – none knows when it’s going to hit us!” Phoolkumari, in Nayatola village, who had lost one of her hands in an accident, was clueless how to arrange food for the children. Like many of her neighbors, she was also dependent on remittance form her husband who works in a distant city.

“Does this mean he will not be able to come back? And then how is he going to send me money? Will he lose his job too?”, thought a perplexed Phoolkumari. And there was no answer. None had any certain answer.

In fact, quite strangely, the regular visitors from PRADAN had also topped coming. They would only call the villagers to tell them to stay calm.

“We are trying to figure out options to support you in every possible means. But we don’t know how we will reach out to you – it’s not safe to step out at all. But don’t listen to any rumor – Coronavirus is just a disease, a very bad disease that spreads if you touch anyone who is infected already. And you won’t be infected if you don’t step out and keep your nose-mouth covered and wash your hands regularly with soap.”

All that sounded comforting. But what about food? And water? Without these most essential things – how long would they survive? The days would still pass, but the dark nights started seeming darker and longer than the any of the new-moon nights that Sonali and Phoolkumari had ever witnessed in their life!

On the other hand, the PRADAN team members, based at Sarai, were sleepless.

Didn’t we commit to pull out every single poor family out of poverty when they had joined the sector as development professionals? Didn’t that commitment include being there with the communities even at the most difficult times and at every hour of their crises?

The biggest dilemma that the team faced was how to strike the right balance between the State’s directives, which was of course supreme, and their own conscience that vociferously commanded them to go out and help the poorest of the poor. Compromising their own safety disappeared gradually. And absolutely in tune with PRADAN’s clarion call against COVID-19, ‘JeetengeHum’, they resolved to help each vulnerable family with the required ration and safety kits so that none stays hungry, none falls sick due to lack of a mask or a soap.

A flurry of conference calls with the district administration at Singrauli and the Sarai tehsildar, helped the team come up with a robust plan of action. The administration assured of regular PDS supply to each needy household with basic food grains. PRADAN teams were entrusted with the responsibility to assist the administration with all other important items. In fact, the administration also issued passes to PRADAN staff so that they can start visiting the villages and distribute the packs. And for doing this, a proper list of the people who actually needed this aid, was essential.

Women of the local SHGs took the lead to visit each and every household and trace their condition. Gram Rozgar Sevak and Patwari of most of the Gram Panchayats were involved in the preparation and scrutiny of these lists.

PRADAN’s Sarai office turned into a workshop for preparation of food-safety items packs. Kits consisting of 1 kg of pulses, 1 kg of onion, 2 kgs of potatoes, one pack salt (2kg), turmeric powder (100 gm), soybean, 1 liter oil, and two soaps. Also all the change agents including volunteers, CRPs, CSPs who were involved in the data collection and distribution process, were provided with safety masks, gloves, sanitizers and soaps. Around 750 kits have been distributed so far with the help of VO members in around 60 villages in Deosar and Waidhan block. Apart from food kits distribution, awareness generation around COVID-19 and safety measures is also happening using village volunteers. The financial support for this venture came from Azim Premji Philanthropic Initiatives.

While the kits were being distributed, Ravindra Kumar Sahoo, GRS of Gajrabahra Gram Panchayat exclaimed –

“The list prepared by the SHG women doesn’t need any addition or subtraction. They have mapped and extended support to the most vulnerable households in every nook and corner of the villages.”

Indeed. With support from the Panchayat, the SHG women had covered all those households that are led by single women, widows or differently abled persons, senior citizens, destitutes, landless and those households who are entirely depended upon wage earning. And we have been able to reach out to all of them!

“We have infinite days of uncertainty. But this entire process has helped us reach out to every villager and understand the extent of chaos and misery that they have been subjected to. It is a challenging time for all of us. But we are co-travelers with our community members and we will do our best to ensue none succumbs to the pandemic - #JeetengeHum .” Smruthy V Sasidharan