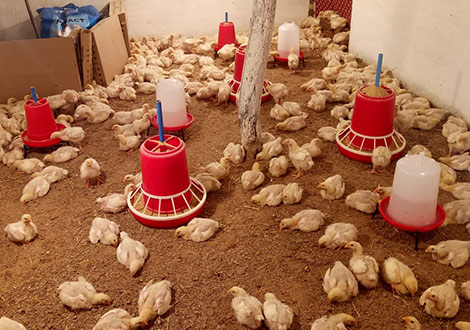 “Send me 1,000 more birds. Yes…I am going to increase my poultry farm now. Out of the 490 chickens in my farm, I have sold 420 birds over the last few months and guess what – I not only recovered the entire working capital of Rs. 35,000, but also bagged a profit of Rs. 3,000! Now it’s time for me to grow it bigger.” Santosh Kumar Vishwakarma finished the call with his supplier in Jabalpur, some 150 kms from his small village, Gujarsani, in Mandla district of Madhya Pradesh. 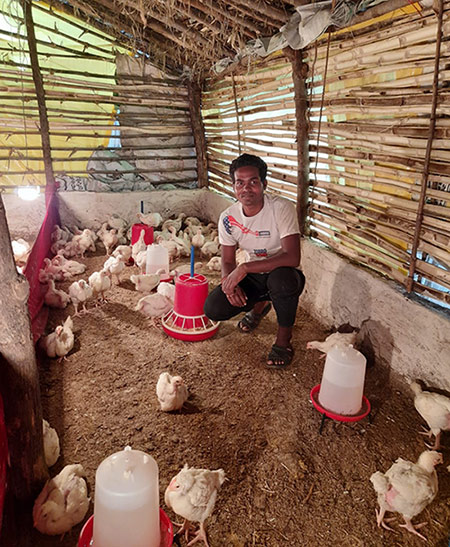 Over the last eight months, Santosh has experienced a sea-change in his life. He had been seeing hens around his hut ever since he was a toddler. A decade back, if anybody had asked a the-then teenager Santosh, what would be the most challenging game for him? – the excited young man would respond “catching a running-hen” with a big smile and protruding eyes! But, never did he realize that those hens can help him earn a decent living, that too staying at home!

Santosh didn’t pursue his studies after class X. Being part of a family primarily dependent on subsistence agriculture, struggling to make both ends meet, Santosh did what most of the young fellows in far-flung villages usually do. He put an untimely end to his studies and migrated to the city of Indore to earn money in the quest of a better life.

In Indore Santosh joined a hotel.

“The first two months passed changing and cleaning linens. The next four months I would take orders in the restaurant and serve food to the customers. While working in Indore hotel I got to know about a company in Mumbai. Decided to shift there. The next six years I worked in that company where I polished marbles, cleaned glasses and carpets.”

Opposite to his workplace, there was a slaughter house, and Santosh became friends with its owner. Santosh learnt that the owner was making Rs 60,000 to Rs. 70,000 a day, by selling poultry meat.

“An idea started taking shape in my mind. A business idea – there are lots of hens in my village – what about selling them? But how do I sell them? That I didn’t know. But there was a conviction somewhere. If he has been able to succeed in business – why can’t I?”

Santosh returned to his Gujarsani village.

Santosh claims that it was this programme which helped him realize what all needs to be done to translate his ideas into reality, how one need to plan to become successful. The program fueled his dream of starting a poultry business. He registered for a week-long training. While going for the training, Santosh did not feel he would learn anything new. He saw the poultry business as buying small chickens, feeding them and selling them when they were grown enough. What was there to learn? But the training proved to be insightful, he agrees today. It wasn’t a conventionally smooth training. Dudhera village in Samnapur where he was initially sent for his training did not have any chickens or any poultry at all, from where he could learn more about the trade. His conviction and dedication towards learning more, led him to travel to different places with the supervisors and that is how he was able to learn about vaccines, illnesses, medications, weight, etc. 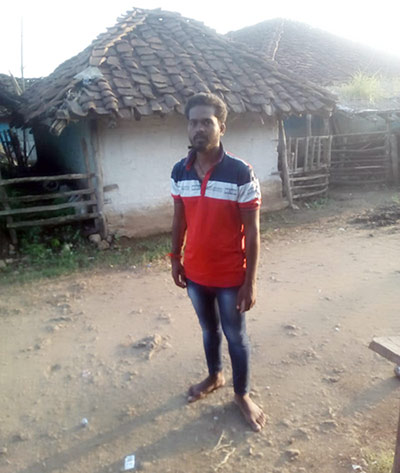 “I didn’t feel confident to run my business with the seven-day training. I stayed in Samnapur for more or less a month to learn and understand all the nitty-gritty of entrepreneurship.”

Santosh returned with a lot of business insights. He did the calculations multiple times, and found that at least Rs. 35,000 was needed as working capital to purchase baby chickens, feeding materials and medication. All these were the basic requirements to kick-start the business. Santosh applied for loans at various places but none agreed – after all Santosh didn’t have anything to keep as collateral against the loan amount!

“Everybody said a NO. I didn’t know what to do if loan was not available. My morther and my newly married wife, Anita, were my last resort.” 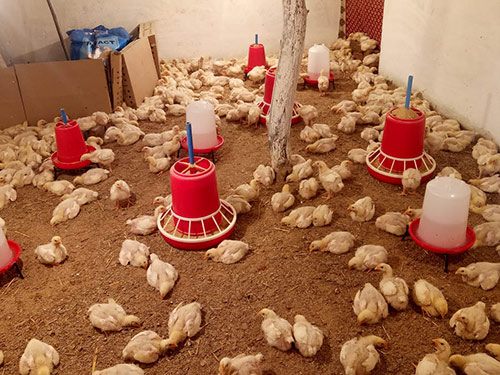 Santosh got most of his capital keeping some of their ornaments as collateral. He also borrowed some money from relatives. Santosh purchased 510 chicken, food and water vessels, feed and medicines and also paid for transportation cost of these materials from Mandla city. Amidst heavy rains of August 2019, Santosh’s mini poultry-shed got filled with chirping cute little chickens.

The chicks took about four months to weigh a kilo each. Santosh knew the time has arrived to start selling the birds, as per their weight. And selling in bulk to bigger store owners in Narayanganj made more sense than selling them off to individual customers. Santosh started selling his birds from December last year and until July 2020, he sold 420 chickens for Rs 38,000. Not only he recovered his initial investment, but also reaped a profit of Rs. 3,000. Well, that’s just the beginning – but Anita and Santosh’s mother both are proud of his success today. They are happy to get back their ornaments too!

Santosh does not run to catch country-hens any more. Santosh, at 26, has realized that a much greater joy lies in rearing chicken and selling them in the market. And what more does a young man like Santosh needs if earning regular income becomes this easy, staying at home?