Be it Food or Right – Secure It
by Peeyousmoyee Duara, Surjoday Nandi, & Juba Pratim Gogoi, Jainamore 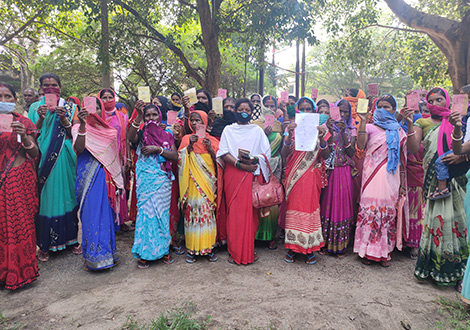 “We are here not for a gram of grain, it’s about our rights, about our entitlements. And if we have to fight to secure it, we mustn’t recede.” 70 odd women members from Jagriti Mahila Sangh of Dumarkudar village organisation of Bokaro district took this pledge three weeks back.

“If you raise your voice against me, not a gram of food grain will be given to you any more” retorted Tej Narayan Mahto, the local ration-shop dealer. A tussle was inevitable. Tej Narayan knew he was wrong but still his voice was louder. But not loud enough to belittle the collective zeal of the women, who were not raising their voice for just a few grams of grains, but it was their right that they were trying to protect from ill-intentions of the ration-shop dealer.

Like hundreds and thousands of small and least known villages in India, life in Dumarkudar village, Bokaro district in Jharkhand was thrown out of gear by COVID-19 lockdown restrictions. Selling the winter produce and procuring food from shops both were not a possibility as markets were closed, roads were empty. None of the 250+ families, comprising of Mahato, Munda and Manjhi castes, were sure when and how normalcy will resume. Thanks to timely support from the local administrative bodies and some of the NGOs that none of them starved. But by mid-June situation improved, the local ration shop started operating normally and the SHG women were seen flocking around shady trees to pep up for the upcoming monsoon agriculture season. While food from own harvest was a matter of another six months, ration from the local ration-shop, managed by Tej Narayan Mahto, husband of one of the SHG members of Saraswati SHG (the original dealer) was a steady support.

But not for long. It was mid-July when the dealer refused ration to most of the card holders.

“Since the past two years Tej Narayan would cheat us. When it’s our right to get 30 kgs of food-grains from ration, Tej Narayan would give only 27-28 kgs to each of us. What about the rest of the 3 kgs? None knew what was Tej Narayan doing with 5 quintals of food grains every month! But who would question the Mahtos? In Dumarkudar, the Mundas and the Manjhis are weaker than Mahtos”, says Kalpana, a member of the village organisation (VO).

“Whenever, one or two of us had gathered courage to confront Tej Narayan, he threatened us saying he would strike out our names from the ration list. In fact, in two occasions he said that he would beat up Chanchala and Jhalki, our VO members, in public if they dared to question him once again!” Sunita fumes in anger as she recollects those incidents.

Nothing could stop Tej Narayan Mahto from stealing food grains from individual card holders. “If you raise your voice against me, not a gram of food grain will be given to you any more” retorted Tej Narayan. And from mid-July, he stopped giving ration to 170 card-holders, out of 195 total card holders in the village.

SHGs have been active in Dumarkudar since 2008. PRADAN started working with them from 2017 and at present 23 SHGs are associated with the Dumarkudar VO. Soon, irregularities in ration distribution and violent behaviour of a crook like Tej Narayan became the major topic of discussion in the VO meetings. A tussle was inevitable. Collective support and a consensus could not be achieved though, in fact about 24 of the ration-card holders would never utter a word against Tej Narayan as they were getting the stipulated quantity of ration, every week. But then the VO members went to check the MIS of NFSA (National food Security Act) no discrepancy was found there. It showed that ration had been distributed till last of August! 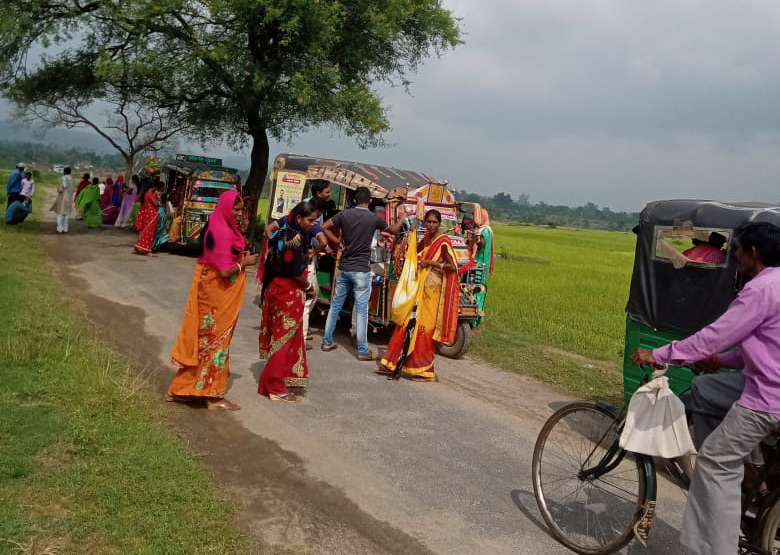 Tej Narayan’s intention became crystal clear. The VO members had no other choice left, but to unite. On 19th of September a convoy of four vehicles and a dozen of motorbikes carried 70 odd members of the VO and the local Jagriti Mahila Sangh along with the Panchayat representatives to the office of the Circle Officer (CO), Kasmar block, Bokaro.

“We are here not for a gram of grain, it’s about our rights, about our entitlements. And if we have to fight to secure it, we mustn’t recede.”

A formal complaint was lodged and CO’s visit to the ration shop was demanded at the earliest possible for investigation and necessary action. The CO sent one of his junior staff, the Halka Officer instead, to do the investigation. The Halka Officer almost gave a clean-chit to Tej Narayan. 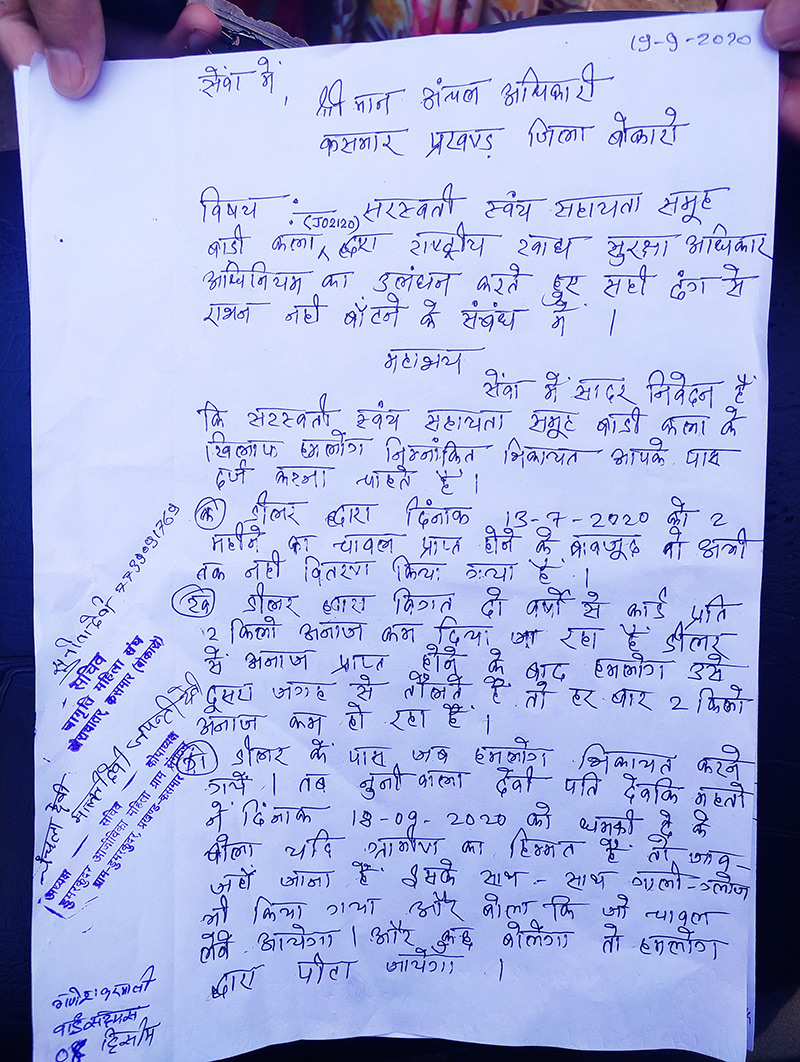 Deeply upset with the CO’s inaction, VO members had to arrange another meeting and decided to approach the Deputy Development Commissioner (DDC), of Bokaro the next day. Accordingly, on 22nd September, a group of 15 representatives met with the DDC and described the situation. On the 24th of September, Tej Narayan’s ration-shop licence was suspended for 2 months and another dealer was allocated for ration distribution to members of Dumarkudar village.

On 4th October, around 150 villagers, led by the VO leaders met with the local MLA, Dr. Lambodhar Mahto with the final demand to cancel the Tej Narayan’s license. Dr. Mahto took no time to address their demand by ensuring selection of another eligible SHG, nominated by the villages and the didis of Dumarkudar village.

It’s a triumph. Maybe a small one in comparison to all other issues of poverty and discrimination, but a decisive one. And it’s not just about Dumarkudar village, but all across the seven states where we are working, women members from more than 21,000 SHGs are raising their concerns against social injustice and working in tandem with the local administration to fix the issues. And in their struggle, they have also mobilized support from PRI members, school teachers and the village youths. Be it PDS malfunctioning, stopping illegal liquor trade, or issues in accessing public entitlements – they are the new leaders spreading hope and ensuring prompt corrective measures in some of the most remote hamlets of India.