Battered And Bruised, Yet She Stands Tall
by Sushmita Dutta 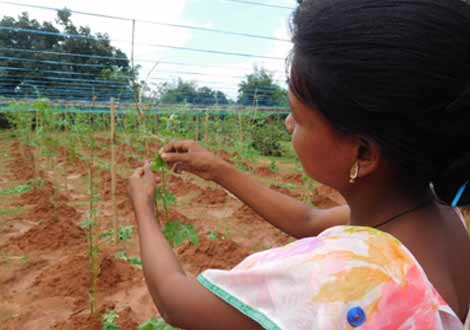 “You have slept with other men”, yelled the husband in front of the gathering of village elders.

“Who have I slept with? Tell me the names”, she said while trying to maintain her calm and dignity. Her four year old son stood in a corner, held by his grandmother.

There was an eerie silence. More insults followed. The wounds from the beating of previous nights were still raw. This was the last straw.

Rising early, heading to the bushes to answer nature’s call, cooking, husband’s farm, working in others’ farm as labourer, MGNREGA job-site, ration shop, village well, forest, weekly haat, monthly visit to her maternal home - there was a pattern to Pakuti’s life. Married as a teenager, this Santhali woman had resigned to her fate. She had internalized the reality that she would have little or no say in decisions regarding her life.

What would happen if she did take some decisions? What if she were to save her hard earned money or spend a little to buy cheap trinkets? And God forbid, what if she were to go to a different hamlet to train farmers on new agriculture techniques?

When Pakuti joined the Self Help Group (SHG), she had little idea of how quickly her life would change. Being the only literate (she dropped out of school in class 5) member, she assumed the role of the group accountant. A young woman with a sharp mind, she quickly grasped the new trellis method of vegetable creeper cultivation introduced by PRADAN in her village. And when a program for agriculture extension needed a Community Resource Person (CRP), the SHGs in the village selected her.

A five day technical training imbued in her the confidence and the necessary skills to engage with other farmers. Meeting other women farmers and trainers in the training also instilled in her the desire to take some control on decisions about her life.

But trouble was not far away: a supposed moment of joy soon turned into nightmare. Her husband used the powerful patriarchal weapon of control and was categorical:

She negotiated. He was adamant. Even if she were to fail, she decided to take her first jump across age-old barriers of entrenched norms.

She started training farmers in her village of Bhuktandih and nearby.

Her husband began to abuse her, both verbally and physically. But she was determined. No amount of physical beating would daunt her now. Finally, she was accused of infidelity. Every beating would now accompany with the false allegation of betrayal of family honour.

Intervention came in the form of a meeting of the village seniors at the police station.

“You have slept with other men”, yelled the husband and in-laws.

“Reconcile and live together”, opined the wise men of the village.

Her friends from SHG were shouted down, for women were not allowed to have a say in such forums.

Two days later, after another round of beating, Pakuti walked out of her husband’s house. Forever.

Pakuti holed up at her parental home in Digaltahadi village of Shikaripara block for two months. She was barred from even meeting her son. The physical bruises healed but not the mental scars. Support soon came from the women of the village. Incidentally, all of them were members of SHGs.

“I only want two things: to stand on my own feet again and to get my boy back”

Pakuti is a proficient farmer and a trainer. She is also one of the few women of her generation in the remote villages of Dumka district who could read and write and not merely sign her name. She resumed her role as the CRP for agriculture extension.

Pakuti works relentlessly. She is innovative and conducts her agriculture training with religious zeal. Productivity of women farmers she engaged with has improved manifold. New women farmers are now adopting scientific agricultural practices. But Pakuti is much more than her agriculture skills for many women in Shikaripara: she symbolizes the undying spirit inherent in all of them, and all of us. This is not just about agriculture or productivity. It is a tale of a single woman not losing faith despite being battered and bruised.

“I am not weak; it is he who is weak who could not handle my earning respect and money. I am not going back to him again. I am strong enough and will work to ensure that every woman in this village has the willingness and ability to stand up for her own”, she sounds resolute.

Her voice wavers a little when she says, "I want my boy back. I have filed a case. I will not rest till I get justice."

Maya Angelou was an American poet, singer, memoirist, and civil rights activist who beat racism and rape, to transform into a dignified young woman standing up for her rights and that of others. Pakuti, perhaps, does not know Maya. But Maya would have been proud of Pakuti, for she is her soul sister, from a different continent, in a different time. And Pakuti exemplifies Maya’s call of liberty and freedom:

Rising early, heading to the bushes to answer nature’s call, cooking, husband’s farm, working in others’ farm as labourer, MGNREGA job-site, ration shop, village well, forest, weekly haat, monthly visit to her maternal home – there was a pattern to Pakuti’s life. Married as a teenager, this Santhali woman had resigned to her fate. She had internalized the reality that she would have little or no say in decisions regarding her life.