We are proud to announce that our project ‘Promotion of Agriculture Production Clusters (APCs) in Tribal Regions of Odisha’ has received the prestigious SKOCH Governance Award 2019 on 26th September 2019. This award is the highest civilian honor in the country conferred by an independent organization. It recognizes people, projects and institutions that go the extra mile to make India a better nation. The APC project is a joint collaboration of Department of Agriculture and Farmers’ Empowerment, Govt. of Odisha, Panchayati Raj and Drinking Water Department, Govt. of Odisha, Bharat Rural Livelihoods Foundation (BRLF), and PRADAN and 17 partner NGOs. Director, Horticulture, Dr. BijayaKetan Upadhaya, received the award in the 61st SKOCH summit organized at New Delhi. Mr. Kirtti Bhusan Pani, Integrator, PRADAN and Shri Pradosh Ku. Panda, ADH Bhubaneswar accompanied him in receiving this award.

APC project was selected among 1,000 other projects across India to finally receive the award. Out of 1,000 project applicants, 600 projects were called for presentation, out of which 200 projects were selected for semi-finals of SKOCH Order of Merit Award. Finally, the jury evaluation team adjudged APC Project for SKOCH Governance award 2019 in the Gold category.

Honourable Chief Minister of Odisha, Sri Naveen Patnaik launched this project on 6th November 2018 which aims to trigger growth in farm sector with an objective of sustainably doubling the income of 100,000 small and marginal women farmers by establishing Agriculture Production Clusters (APCs) and creating 750 agri-entrepreneurs in 40 backward blocks of 12 tribal-dominated districts in the State over a period of four years.

We are thankful to SKOCH for this honor. 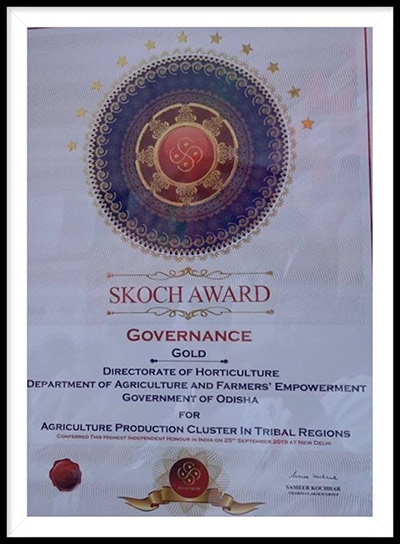