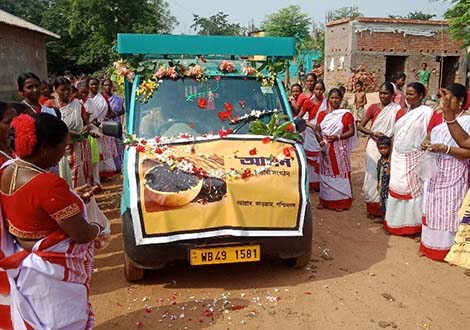 Agriculture in India has a lot of issues, of which the largest one plaguing farmers is that of chemically extractive practices. In late 2016, it was this issue that Aamon sought to address. Aamon is a women owned Farmer Producer Company born in the tribal district of Jhargram in Nayagram block of West Bengal. It is a conscious effort of women to arrest the exploitative effects of chemical agriculture and bring back organic, indigenous farming. The women of Nayagram area had been practicing chemical agriculture for ages and were becoming acutely aware that agriculture could be counterproductive.

Nayagram is an intensive paddy growing belt and all households here grow paddy in the main Kharif season. The whole cycle of paddy was controlled by the market forces - the seeds and inputs were supplied by wholesalers at high prices and the paddy that was grown was collected by them at measly rates of INR 11-12 per kilo. Each year the seeds and inputs would get more and more expensive and that is when the need to change how agriculture was practised emerged. The women came together with PRADAN professionals to think of an alternate way to practice agriculture. In 2017 and 2018, several indigenous and open pollinated varieties of paddy seeds were experimented with to decide which ones could provide at par yield with hybrid (market sourced) seeds, and a few of them performed exceptionally well. The women now had the control over what seeds they could use to grow their food. Gradually, the dependence on chemical inputs was replaced by simple farmyard manure and homemade inputs. In these two years the women had built the foundations for a complete change in agriculture -they had transformed themselves from being helpless farmers at the mercy of fertiliser and seed shops to independent seed owners who could grow what they wanted. 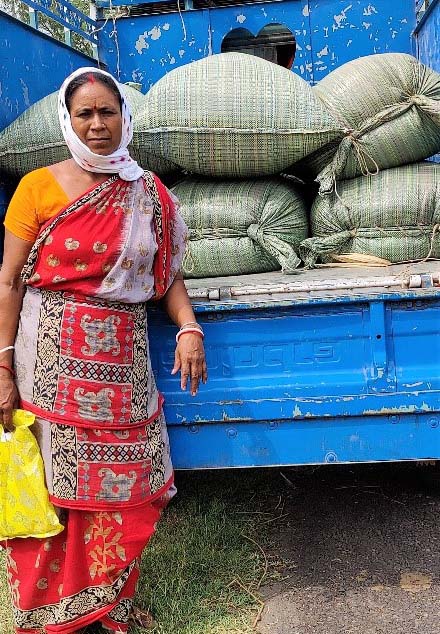 Panchabati with the last of the paddy stock being sold from Damodarpur this year.

It was at this juncture, in June 2020 that the LEAP project was introduced. Growing indigenous, paddy gradually bettered the quality of soil and strengthened women’s resilience to middlemen and wholesalers. However, there was still the market to be considered. While the initial intent of the intervention was to eat better, it became quickly clear that unless the women could push for their produce to be sold in the market, it would not turn out to be a success.

This is what inspired the women to work towards what is today Aamon’s ethos – eat better, feed better. From 2019 onwards, Aamon, supported by PRADAN, set-up a rice processing mill and started selling chemical free, indigenous produce to different parts of the country. With LEAP’s support, members of Aamon were able to visualise their small initiative taking the shape of a company. For the first time, the team had a dedicated fund for building assets for the company and employ consultants to build the company from scratch.

While Aamon’s conception and growth are the culmination of numerous women’s sweat and tears, there are some who stand out. One such woman is Panchabati Baske.

Based out of the remotest village in Nayagram block, Damodarpur, she has become an inspiration for the women in her village and a strong leader for Aamon. She joined a SHG in her village in 2017, as a shy woman whom nobody knew in the village. At that time, she was still growing hybrid varieties of paddy. In 2017, at an SHG meeting, she was selected by the collective to represent them at central meetings and since then she has never looked back. Once a month, she met other women like her from across the block who discussed passionately about using indigenous seeds, organic homemade inputs and she too was inspired. She took it upon herself to inspire the women in her village to take up farming indigenous varieties of paddy.

After experimenting with various types of indigenous varieties of paddy, four varieties were selected for the Nayagram area with its lateritic soil, undulating land structure and rainfall patterns. The varieties selected were Kalabhat (Black Rice), Mallifulo (Brown Rice), Kerala Sundari (Bold White Rice) and Shathia (Red Rice). Each of these varieties were selected for the different types of land in the area and the regular yield of paddy (4 tonnes per hectare) in the area.

About ten people grew Kalabhat in the first year when Aamon first started selling paddy and rice. It took almost a year to sell the first stock of paddy. Panchabati was part of a group of women who travelled across different parts of West Bengal raising awareness about Aamon and its products in melas and events. “It was really difficult, convincing people that our products were good and really chemical free. We went again and again to different melas. I was out almost every month in 2019.”, she smiled.

LEAP provided Panchabati and women like her the support to hold meetings and necessary training programs to discuss and plan the formation of the company, Aamon. “It would have been impossible for us to spread word about Aamon across Nayagram and host events in Kolkata, Midnapore and Kharagpur without LEAP’s support”, says Panchabati.

Women celebrating the first time Kalabhat was sold from Damodarpur by Aamon.


As of last year, Panchabati has sold a whopping INR 420,000 worth of paddy from her area, earning about INR 50,000 herself with little to no input cost. Such is the impact of the realised dream of Aamon that the SHGs in Damodarpur celebrated their collectivisation for the first time since their formation. There was a day-long event of dancing, singing and feasting. “It is completely unheard of. Women sit in SHGs for savings, they are hardly ever thinking as a cohesive group. When we started doing organic farming and growing indigenous paddy, the women found a purpose to come together and plan for collective action.” 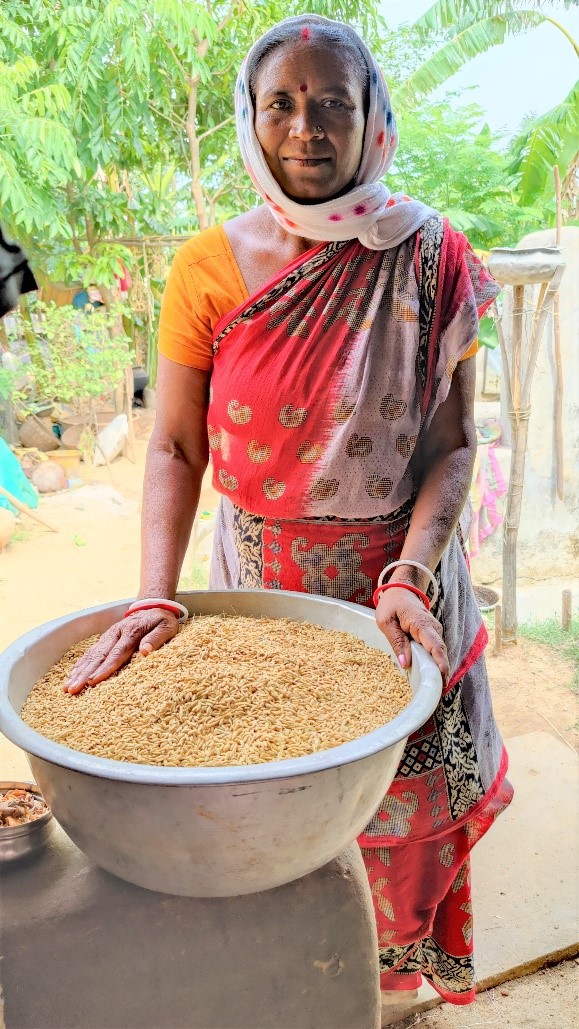 Panchabati has motivated over 100+ women to become shareholders in Aamon and has taken a target of linking all of these shareholders with one or other economic activity in Aamon. Aamon, with the support of Panchabati and others like her has grown from selling just paddy and rice to selling Sal Leaf plates, turmeric and has plans for selling homemade microbe fertilisers.

LEAP has helped Aamon take these strides forward. With the support of funding for pilots, mass mobilisaton and asset creation, it became easier for Aamon’s women to dream big. With the support from LEAP, Aamon was able to consult with experts from ICAR, OneCert International and SSOCA leading up to 500 women in Aamon having NPOP (National Programme for Organic Production) certified land and produce which ensures better rates for their produce in the market. Aamon now has a commercial website, is selling its products on IndiaMart and Meesho and has found channels for marketing that would have been impossible without the support of the project for building the FPC (Farmer Producer Company).

“Nobody even knew my name, but now they call me the dhaaner didi (the paddy woman) in the village. People come to me for advice about their crops and consult with me before choosing their Kharif crops.”, Panchabati exclaims. It is victories like these that make Aamon more than just a Farmers Producer Company. In Nayagram, it is an institution, a means of recognition and social capital for women who now see themselves as farmers. From distribution of seeds to perfecting the packaging material, from funds for board meetings every month to being able to visualise having its own office, LEAP has been with Aamon every step of the way.

As of June 2022, Aamon has already achieved a business turnover of INR 1.52 million with a net profit of INR 200,000. Aamon now has 2677 shareholders, across 65 villages in Nayagram block. In the interest of diversifying products and bringing more farmers into the fold of Aamon’s shareholders, Aamon has now started making premium Sal Leaf Plates and initiated turmeric cultivation. Aamon’s goal is to achieve a turnover of INR 40 million in this financial year (2022-23).