According to the Proceedings of the National Academy of Sciences (PNAS), climate change will cause ripple effects throughout the Indian economy as poor harvests drive up food prices, shrink agricultural jobs and draw on household savings. The impact on vulnerable communities will be maximum. The erratic pattern of monsoon due to climate change in the past decade has already aggravated the situation. Rural communities need to invest on farming infrastructure urgently to avoid major turmoil in their livelihoods.

PRADAN has been working with rural communities on natural resource management for 35 years. PRADAN’s model for comprehensive natural resource and water management has now been recognized and incorporated as a livelihood promotion strategy in the Mahatma Gandhi National Rural Employment Guarantee Scheme (MGNREGS). 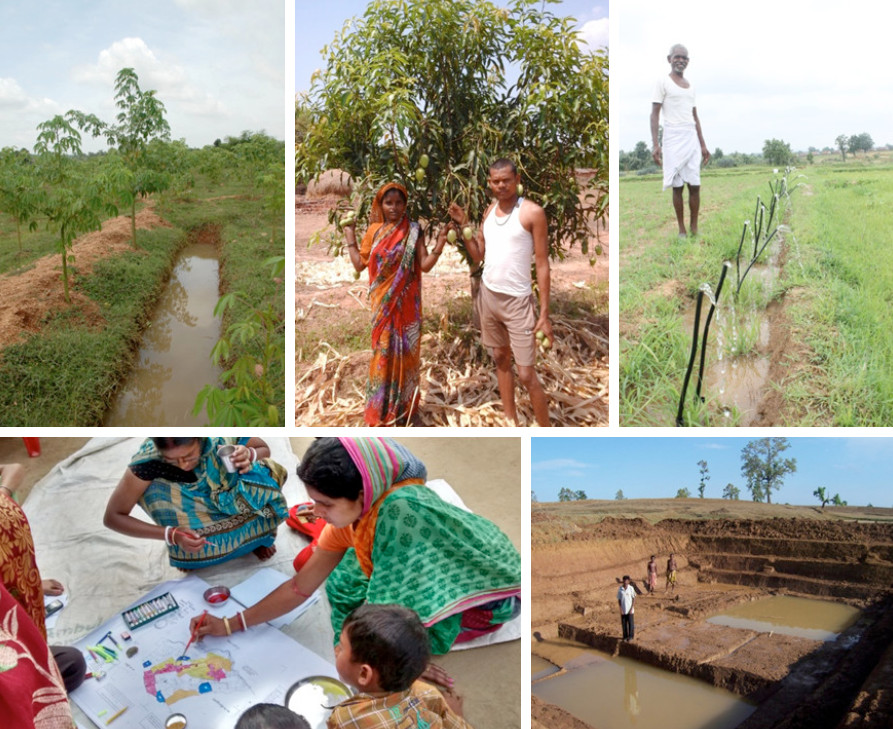 The subsistence farmers of Kadampur village of Sunderpahari block in Jharkhand had poor irrigation facilities and undulating terrain with degraded topsoil, leading to low agricultural productivity. In this rain-fed agriculture-dependent village with 98 households, the erratic monsoons exacerbated the vulnerability of poor tribal families. Integrated Natural Resource Management (INRM), through strong community-based institutions (women’s SHGs), was adopted, after a village-based training and planning process, to address this persistent vulnerability of the poor. Funds for implementation were leveraged from various government and non-government agencies. With regular engagement, people have demonstrated their commitment to tapping run-off water. An average 0.8 acres of land per family has been treated under the 5% model (introduced by PRADAN across Central and Eastern India), which is enough to generate seven months of food security per family, even during dry spells. Families have benefitted from the horticulture intervention done over 4.3 acres of land, with a potential to fetch Rs 7,000 per family per year. Another 0.8 acres of land per family has been brought under assured irrigation through the installation of a micro-irrigation system. Creation of assets to tap rainwater and rejuvenating water sources, along with other INRM interventions, has brought about considerable change in the productivity of several crops in Kadampur, turning it into a climate change resilient village.

We need ₹22000 per village for training and mobilization support in 2 years.