Why Go Far When Earning Is Easy Close To Home?
Story & Photo by Uttiya Routh, Peterbar 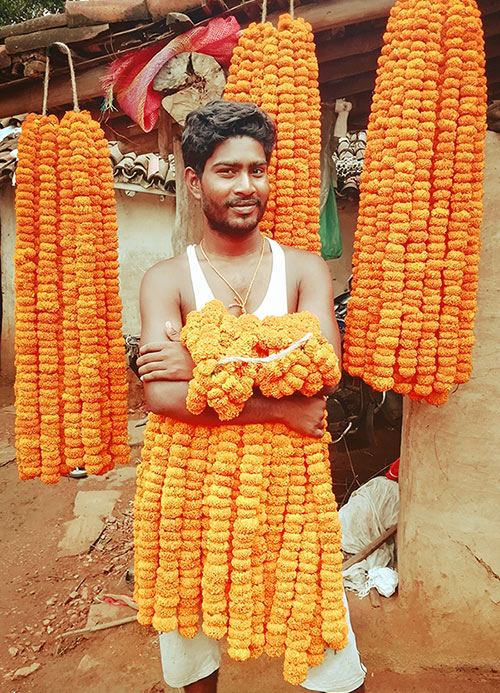 The nippy November breeze of Aunradih village, in a remote nook of Petarbar district of Jharkhand, had started filling up with sounds of crackers and smell of gun-powder. It was Diwali time. Diwali was never one of the main festivals for people in Aunradih. But with more people migrating to cities for better work and income prospects, festivals like Holi and Diwali are steadily making pompous inroads to the meandering lanes of these far-flung tribal-dominated villages of Jharkhand. In Aubradih, young men like Ashok, Anil, Suresh, and many more, would stay and work in cities like Kolkata, Mumbai, or Delhi and come back to their ‘homes’ only during Diwali or Holi. And along with them would come slices of their ‘modern lifestyle’ and ‘new festivals’ to Aunradih.

The day before Diwali in 2015, a small crowd gathered at the playground, beside the old school building. Anil had come back on his Diwali vacation and the young boys of the village spotted him getting down from the bus wearing a glamourous pair of goggles. After a few exchanges, Anil showed them his newest possession – a brand new smartphone! In a frenzy, all the boys wanted to touch its screen at the same time and see what magic it can create in terms of showing photos, making calls and so on. While noticing their gleeful faces, a proud Anil declared

I could buy it because I showed the courage to step-out of Aunradih. If you guys choose to stick to your great-grandfather’s profession, then it’s a pity.

“It’s a pity”. The words had hit Rashu, quite hard. Rashu Tanti, a young man from the same village, had completed his higher secondary exam and decided not to study further. Unlike Anil and many of his own schoolmates who migrated to cities for a better fortune, Rashu believed in staying back in his own place and doing better things in life. This belief had become his conviction. And his uncle, who worked as a community service provider for the local villagers being closely associated with PRADAN, kindled his interest in agriculture. Not only interest, Rashu already earnt fame among Aunradih farmers for his farming skills and an innate tendency to try out something new! He was chosen and being groomed as an agriculture entrepreneur by PRADAN professionals. So apart from growing crops, by 2016 Rashu started selling vegetable saplings from his nursery to other farmers. Rashu’s supply also included seeds, fertilizers, and pesticides. He had clearly formed an entrepreneurial model that promised a handsome return.

Looking at the prospects of his business Rashu turned to his uncle and the PRADAN professionals for some guidance to take the next leap. Some of the villagers were talking about growing flowers; Rashu wanted to know if that could be his next leap? But that would mean a ready investment of not less than Rs. 50,000 to procure flower saplings from Kolkata and its suburbs.

To Rashu’s delight, PRADAN helped him with the required money from a Syngenta Foundation of India community development project. September 2017 witnessed Rashu helping 50 farmers of Aunradih grow marigold over 6 acres of lands that remained fallow for ages. Bright orange and yellow blooms covered the whole space in a month and Rashu geared up for marketing the produce. He purchased each marigold-garland at Rs. 10 and headed to the nearest market. The farmers waited with hearts pounding faster with the expectation of profit!

Just like cultivation, marketing also demanded specific skills, knowledge, and experience. And it was Rashu’s first time in the flower market. The weather was very foggy which led to a decline in marigold demand. Rashu hoarded his garlands in the go-down thinking that the prices will rise shortly. But that added on to his expenses only as he had to pay for the go-down rent. Rashu suffered a huge loss.

I was broken from within. Garlands of over Rs. 40,000 could not be sold. I returned rupees seven per garland to every farmer upon my return. Each of them suffered a loss of rupees three per garland. But I was astonished to see, none said anything to me. In fact, farmers praised my efforts and said this was the first time – I must try once again!” recalls Rashu with tears of happiness limning his eyelashes.

When Anil came to Aunradih to enjoy his Diwali holidays in 2018, he found most of the farmers super busy growing marigold saplings. Upon asking his neighbors Anil came to know how Rashu took up a new activity in the village and suffered a loss the very first year. This time, Rashu was supporting 159 farmers. The land area also grew to reclaim 22 acres fallow area. Anil smirked. In due course of time, after the blossoms, he purchased each garland at a rate of rupees eight and sold them at markets of Ramgarh, Hazaribag, Ranchi at a margin of two rupees per garland. Rashu calculated all aspects of market rates this time. If selling at the market directly was profitable, Rashu bypassed the wholesalers. Rashu got a hero’s welcome upon returning to Aunradih. Each farmer earned Rs. 15,000 to Rs. 20,000 and Rashu himself earnt Rs. 80,000 as profit. Besides this, he also raised vegetable and marigold sapling which gave him a profit of Rs. 20,000. That’s a straight Rs. 100,000 profit!

Last Diwali, when Anil came home, his family members were busy decorating the doors and windows with bright marigold garlands. To Anil's surprise, all the other dwellings of Aunradih wore marigold garlands too - something that he never experienced before. That evening, as Anil stepped out for a leisurely stroll, he saw Ashok and Suresh busy talking to Rashu. As Anil passed by, he overheard a few pieces of their conversation:

Suresh: "How much do you earn by selling the saplings?...you mean to say you deal with middlemen in the market all by yourself?"

Rashu: "Not only that...I have made a profit of Rs. 1 lakh last time, and this year I am supporting about 350 farmers!"

Ashok: "Aah! That's a hell lot! Can I also join this? I am tired of going to faraway cities...what if something good can be done right here?....."

Anil kept walking, his pace had reduced. Maybe, he was also contemplating the same as well!